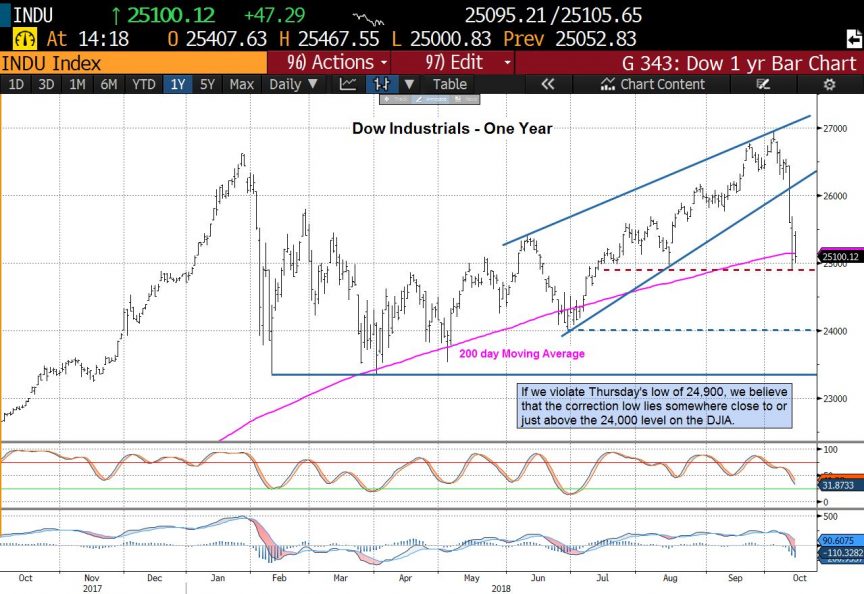 Up the Stairs, Down the Elevator

The large decline in the markets on Wednesday and Thursday certainly made some headline news, but we have to keep in mind that pullbacks in the market are often more volatile than the uptrend that preceded them. This is actually quite normal and somewhat reminiscent of the pullback we saw in February of this year when we had two 1000-point down days that have now been largely forgotten.

The support that the DJIA had around the 26,000 level has been clearly broken, and now we would be looking for the bottom of the pullback to be somewhere near the 24,000 area where the market has bottomed on several other occasions this year.  The bigger challenge in all this could be the time that the markets trade in a more choppy fashion within an overall range that may make gains in general harder to come by, as has been the case for most of this year already.

As painful as it is to watch your favorites get punched, one school of thought suggests this week’s momentum meltdown may turn out to be good news for the market. Take a look at how this episode differs from the February rout. Back then, stocks that had beaten the market in recent months kept rising relative to the S&P 500 Index during the first leg down. An initial attempt in the S&P 500 to bounce failed, and stocks didn’t stop falling until momentum yielded. Effectively, the index traced out a W-shaped pattern where stocks took roughly seven months to fully recover. This time, momentum stocks bore the brunt of the selling right away.

During Wednesday’s carnage, winning groups such as Technology led the retreat and the FANG block of Facebook, Google parent Alphabet, Amazon and Netflix sank the most on record.  The violence of this selloff suggests a fast deterioration in investor sentiment, sometimes a sign of capitulation that indicates a bottom isn’t far away. It’s in stark contrast to February, when retail investors and fundamental-conscious money managers held out in the face of computer-driven selling before finally giving in. A V-shaped recovery is more likely than the W that characterized the previous algorithmic, computer-driven trading sell-offs.