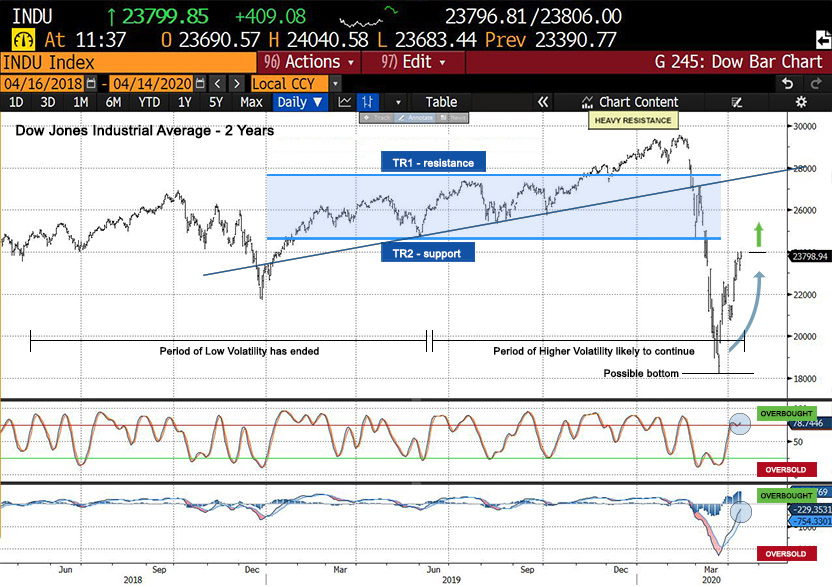 Half way back. The big rally in the markets over the past two weeks is normal after such a sharp drop and looks to be part of a bottoming process rather than the start of a major upswing at this time. We think the volume on the rally has been declining into strength which is a sign of less commitment that suggests the momentum is slowing and further downside volatility will also continue to be a part of this overall process. The market has reached the 50 percent retracement mark (half way back) which is typical following a sharp decline. The markets should pause here and possibly drift back down roughly 50 percent off the recent move to approximately 21,000 on the Dow. The markets will need some positive news to resume an upward move through the overall 50 retracement. Caution is advised. 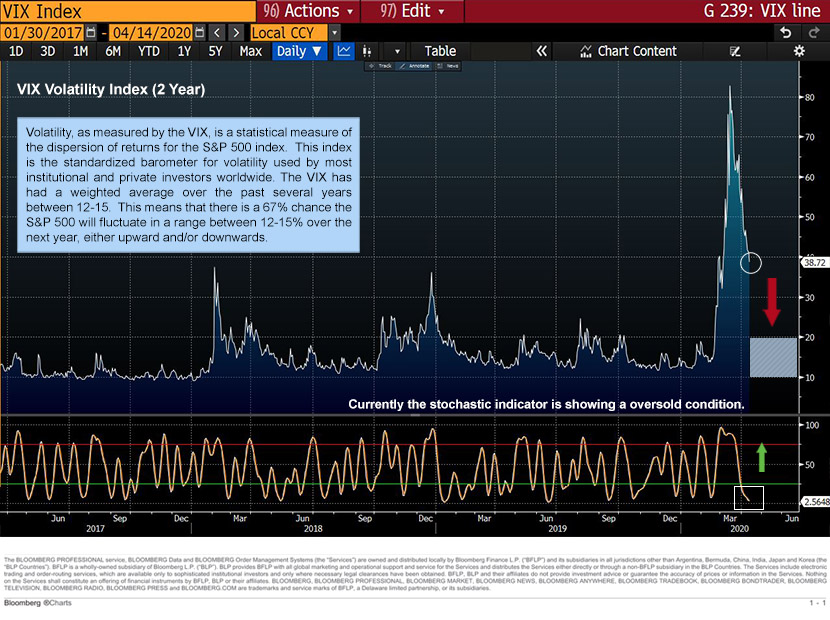 The large amount of volatility in the market is making it difficult to see any trend that may be developing, and this is a common characteristic of a market bottom. The “best” and “worst” days in stock market history are often clustered around long-term low areas of the market, and the current market pattern is an example of how that works. The market seems to change direction on a daily basis, and even during the day, with moves that are large enough to make it hard to see the overall trend when viewed on this short-term basis. Market bottoms come in many forms and often go through a period of testing within a range as we expect to see with the current market pattern. Long-term the VIX should retreat below 20 and the markets should resume an upward trend.

There is always a possibility the bear market low could be tested again, but we believe the low is in place and more time will be spent within a trading range as the economic and earnings numbers continue to feed the higher volatility that has become the new market normal for the time being. We think that by the time there is more clarity regarding the virus crisis and the economy, the market will already be moving up and out from this bottoming period. 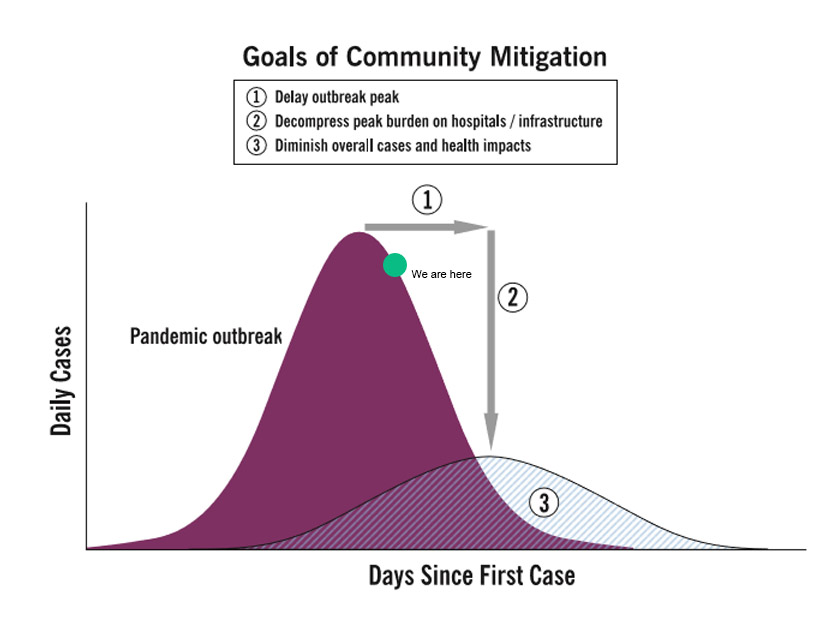 U.S. stocks are unlikely to make fresh lows thanks to the “do whatever it takes” approach of policy makers. A combination of unprecedented policy support and a flattening viral curve has “dramatically” cut risks to both markets and the American economy. Policy measures including rate cuts, the Federal Reserve’s Commercial Paper Funding Facility and fiscal stimulus such as the $2 trillion CARES act are among the “numerous and increasingly powerful” actions that have spurred equity investors to take a risk-on view.

If the U.S. does not have a second surge in infections after the economy reopens, equity markets are unlikely to make new lows. The Fed and Congress have precluded the prospect of a complete economic collapse.

U.S. corporate earnings are likely to slide into recession this year as the impact of business closures, stay-at-home orders and coronavirus infection rates chokes off demand and suffocates profits in the world’s largest economy but we expect investors to look through first-quarter results from the upcoming earnings season, and focus instead on the outlook for 2021. 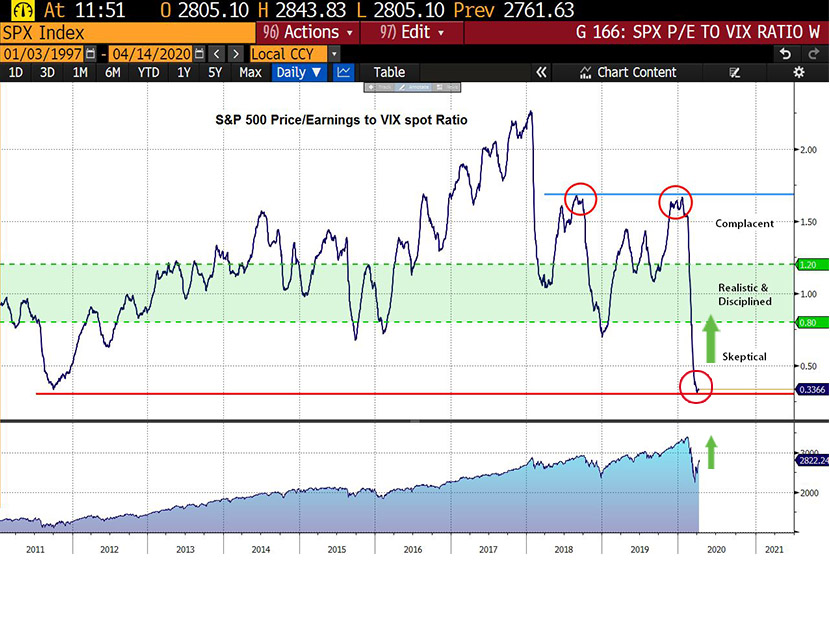 According to estimates, S&P 500 earnings will likely slide 9% over the first quarter, from the same period last year. The slump will then continue into the second quarter, when earnings will fall more than 20% from last year, cementing the first earnings recession — defined by two consecutive quarters of profit contraction — since 2016. Despite the likely steady stream of weak earnings reports, 1Q earnings season will not represent a major negative catalyst for equity market performance. With that said, long-term allocating to stocks is prudent as shown by the contrary indicator above. We view periods where the market may pull back sharply for a few days as good general entry points.

Short term (days to weeks) – Caution. The major indexes have rallied of the lows but have reached their critical 50 percent retracement from the highs. We will be lightly allocating on pullbacks or Buying Dips.

Intermediate term (weeks to months) – Cautious but Bullish. During this time, the markets will be focused on news drive data. This data will guide us as to when we will get fully invested.

Long term (months to years) – Bullish. The secular bull market that began in 2009 remains intact as it moves higher in a larger rising channel that is 25% wide. The major indexes were forced to the lower end of their channels which suggests to us that there could still be plenty of positive movement for the longer term. These secular bull markets tend to go on until the measures of stock valuation and investor sentiment are at much higher levels than they are today. These secular bull markets also track the trends in the economy and although some measures of economic growth are in positive trends, the overall trend continues to be in a slow but steady recovery which has allowed stock prices to do the same.