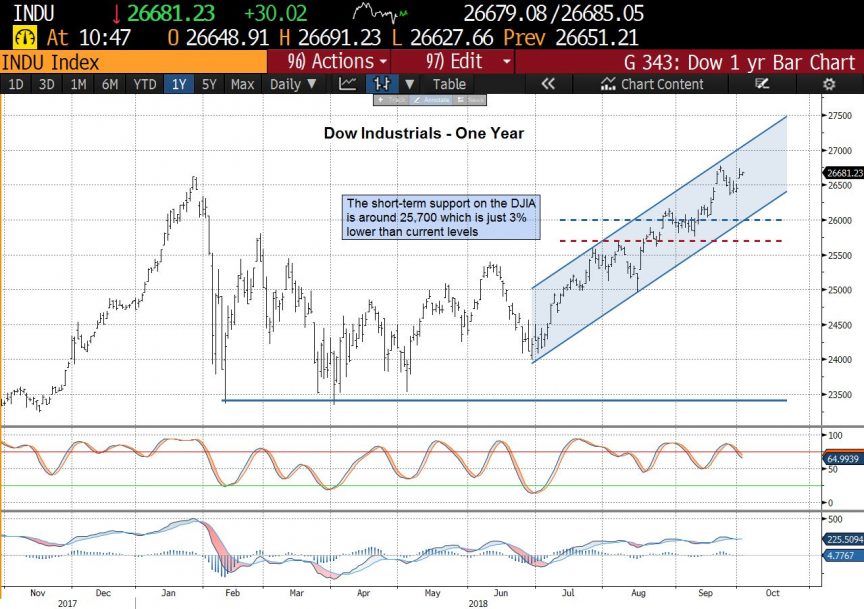 The Dow Jones Industrials were up nearly 200 points on Monday due in large part to the resolution of some of the tariff issues with Canada but the rest of the market did not fare as well as the broad market indexes. The Tech stock indexes were down on the day and the small-cap Russell 2000 Index was off by more than one percent. The larger Technology names have been leading and holding the indexes higher, but even the semiconductor group within the Tech sector is losing relative strength which is often an early indicator for the broader Tech stocks and the market in general. The declining issues on the NYSE far outpaced the advancing issues, which means that for the majority of stock lists and portfolios it was a down day even though the Dow Industrials had a good day. We believe this type of mixed performance is generally not a healthy sign for the market and can often be a signal of possible change to come. The closest support levels on the Dow Industrials are at the 26,000 and 25,700 areas and it is that 25,700 level that is most important to hold, in our view, as below that the pullback potential would be fairly open. 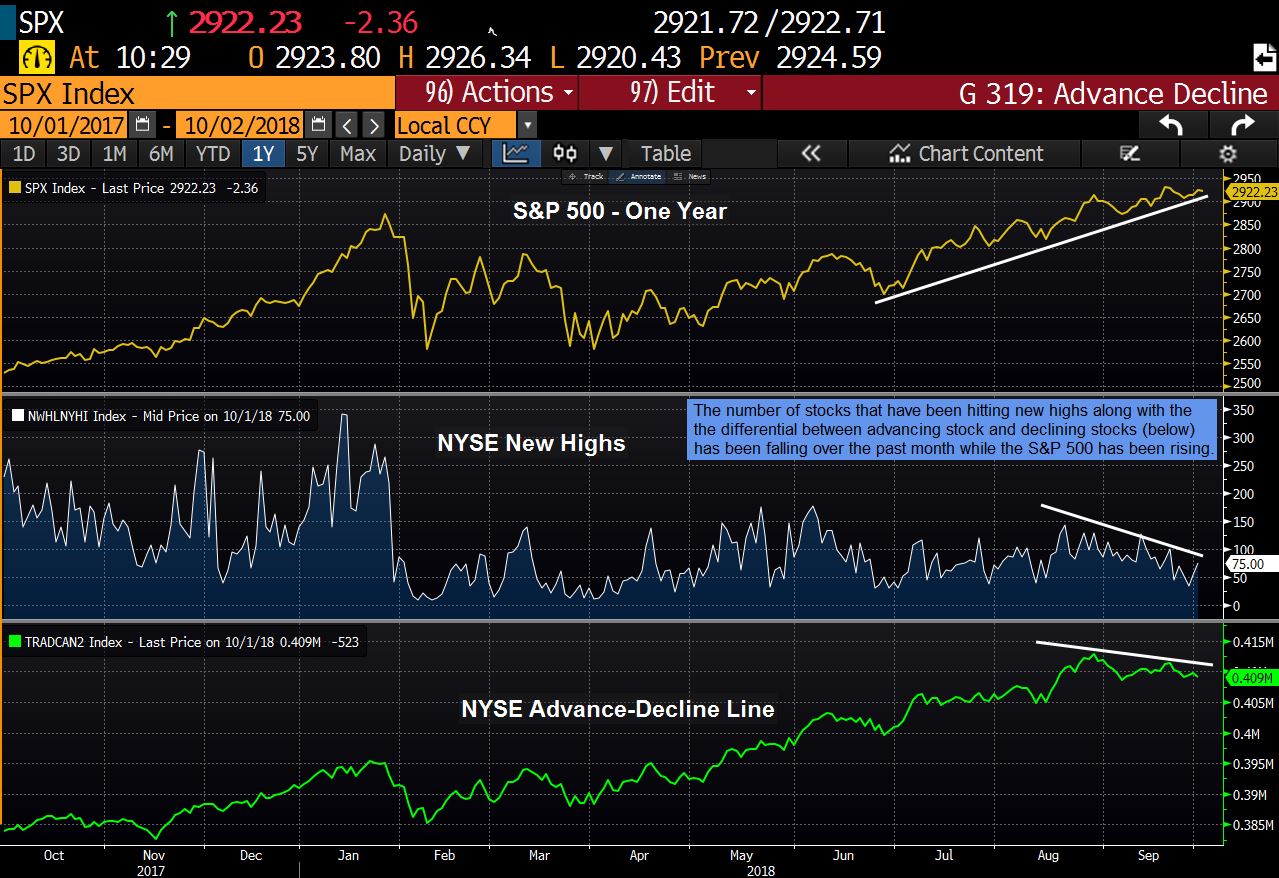 The advance in the stock market has come on a note of decreasing participation by many stocks as the recent new highs for the indexes saw weaker numbers of advancing stocks with fewer names hitting new highs along with the indexes (above chart). We believe this means there is a correction already occurring in a good number of stocks, but some of the larger names that are more influential in the index values are holding at higher levels. In order to expect a stronger move to the upside, we need to see the stock participation increasing and not decreasing as it has been recently.

There has been much commentary recently about the potential resurgence of value stocks and the possible topping of the growth stock strategy (see chart above) that has led the market indexes higher over the past several years. There may be some early signs of individual value stocks bottoming and some of the higher P/E growth stocks topping, but this has yet to translate into any kind of broad and meaningful trends that we believe would be of benefit to pursue. It is common for investors to look at a rising trend and speculate on when it may end, and also to try to identify a bottom for a stock that is going down, and this exercise could be what is driving the recent interest in the value stock theme. As of now, the relative performance of the growth stock indexes continues to outperform their value counterparts with no sign of a change yet in a broader sense, in our opinion. 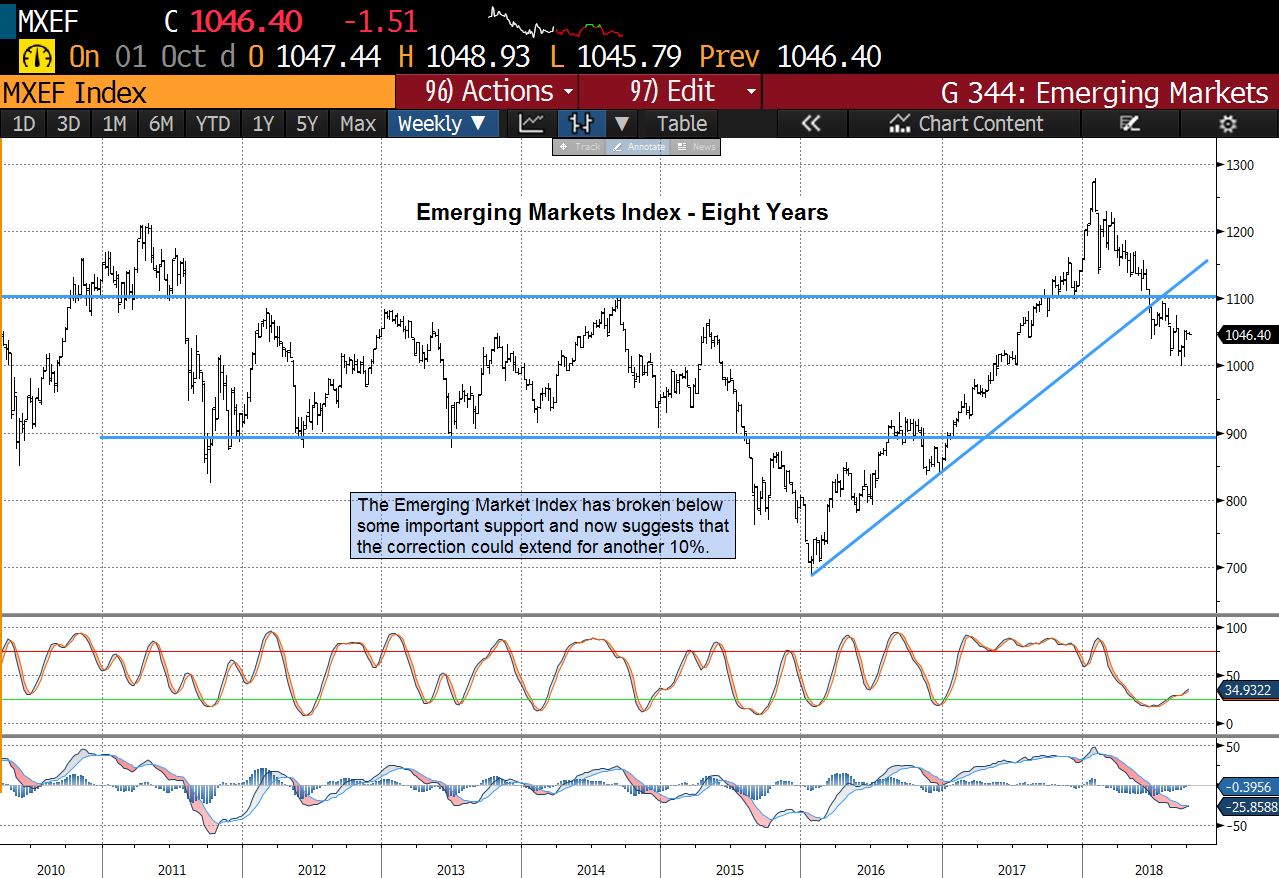 The Emerging Market indexes have been notable this year in that they have been in steady decline and underperforming the S&P by a large margin (see above). The trend is clearly correcting, and as we measure it on a technical basis could be about two-thirds of the way down from the peak to a likely support and bottoming area. The direction of the trend of emerging markets and other foreign markets often track that of the S&P, but there have also been times when the different world markets have moved in opposite directions for extended periods of time. The movement of one market does not necessarily mean that others will follow and fears of “contagion” may not be realized. For now, we watch the emerging markets for signs of a bottom, which normally would take many months to develop. 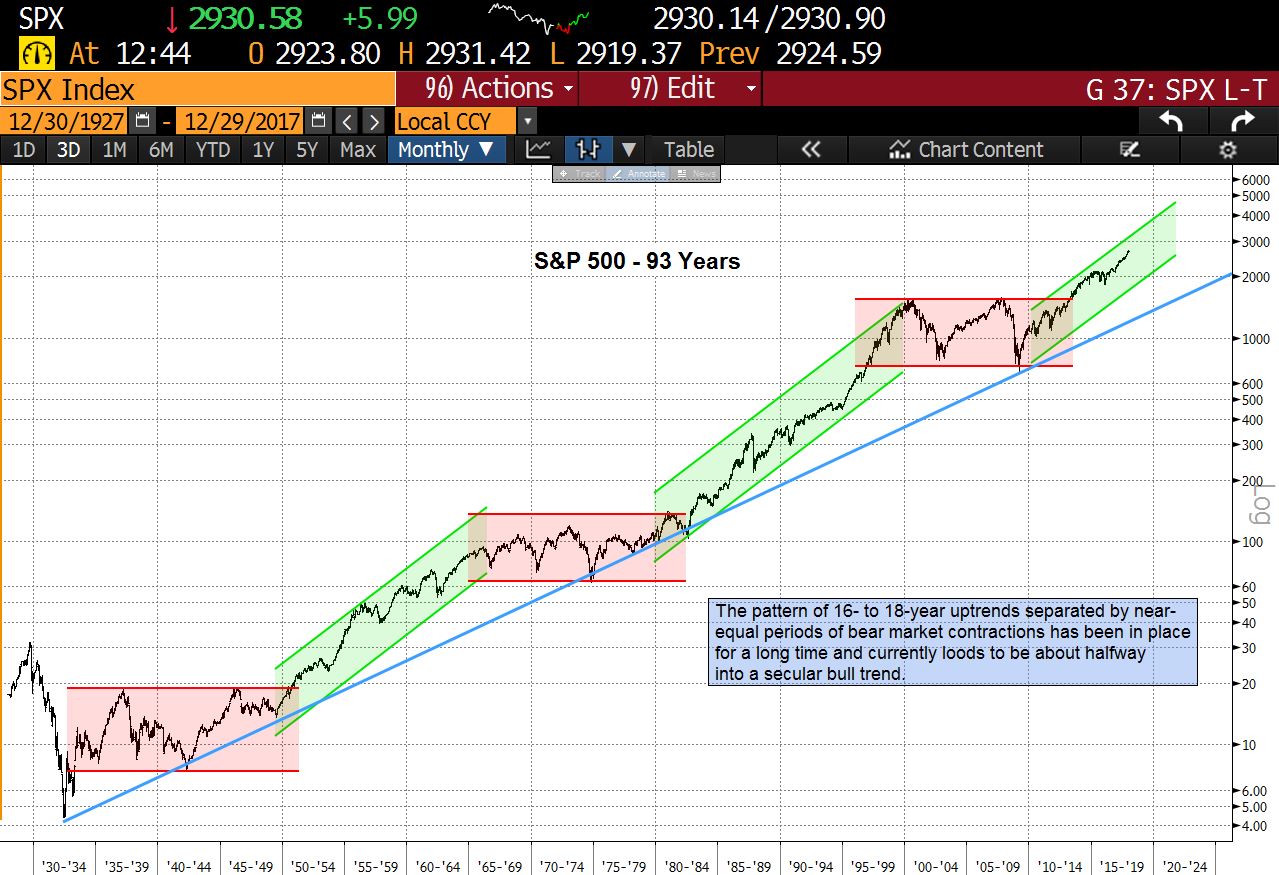 The markets may move up and down each day depending on what news events are moving investors, but it is important to remember that these short-term moves are all happening within the longer-term secular bull market that began in 2009. And while some statistics may indicate that the bull market has been in place for a record amount of time, other measures lead us to believe that we are maybe just about at the halfway point of the long-term bullish uptrend. While it is normal for people to be looking for a top in any uptrend, we believe that for the market and the longer term, we need to see a booming economy, robust earnings and high valuations, and investor sentiment that is up into the “irrational exuberance” territory. So far it is only the much more positive earnings reports that are noticeable, and this is a trend that can last many years. We watch the daily news with much interest, but if it does not contain the substance that could affect corporate earnings or the stock market on a longer-term basis, we will not react to it on an investment level.

TRADING UPDATE: The stock market has been displaying remarkable strength in the face of trade disputes and other world-wide economic concerns. This is especially bullish when we are hard-pressed to recall a time when so many market mavens and gurus are expecting the market to pull back in a big way. We view that as meaning there is still plenty of room for improvement in the opinions of investors, which then can translate into more market strength. We continue with a bottom-up approach to security selection and while we are currently carrying low cash weightings, we remain vigilant and committed to raise cash or putting a hedge on the portfolio should market conditions change.