The markets are in short-term rally mode that has moved the Dow Industrials and S&P 500 back up to some resistance areas that could set the tone for the markets moving forward. We suspect that the trading range for the year will continue, but there is also the possibility that the indexes could make it back to their previous high levels again. Our concern would be for the pickup in investor optimism with each rally in the U.S. markets while much of the rest of the world indexes remain in correcting trends. We suspect that the current rally will be normal within the context of an overall trading range, with more of the same back-and-forth market trend for the next month or two.

The “News-of-the-Day” seems to be interpreted in whatever direction the markets move that day. And so there may be many reasons to be bullish or bearish in the current news environment, and the indexes remain in ranges that could last longer than expected. There is a subtle shift going on between sectors of the market, with weakness showing up in the frequently recommended sectors of Energy and Financials, while the recently weaker high-yield and Consumer Staples areas are showing signs of firming. But that’s how these trading range periods tend to be, with numerous cross-currents that net each other out to produce an overall neutral trend. And so we watch and try to figure out the daily news and noise, but remain patient when it comes to the overall market. 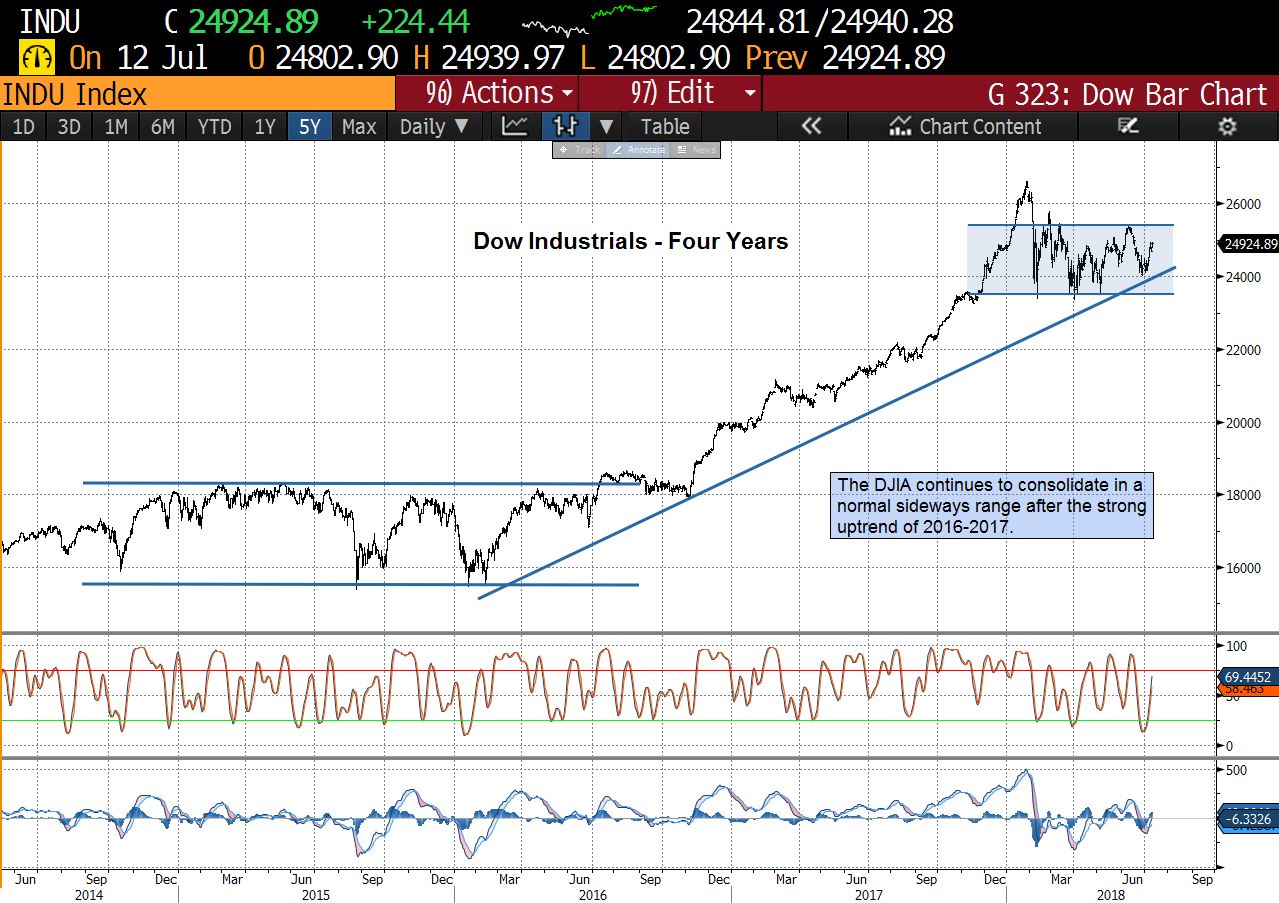 Short-Term (Days to Weeks): Neutral. The stock market has been moving in a tightening range over the past several months with no clear indication of a meaningful breakout coming in either direction anytime soon. The internal market indicators along with the sentiment are also moving within ranges, but these tend to offer better market signals at extremes, and we think the current environment is not offering much in the way of any high readings to create a clearer bottom or top, and so the lackluster trading range continues. Nevertheless, as we enter the announcement period for 2nd quarter earnings, any significant surprises may prove to be a turning point for the markets.

Intermediate-Term (Weeks to Months): Neutral. The stock market trend has changed from a strong bullish uptrend that it was in during 2016 and 2017 into a consolidation period that has lasted several months could continue as the fundamental valuation measures catch up to the higher stock index levels. It is normal for the markets to trend sideways after stronger moves to the upside, and the overall trend would remain normal and constructive as long as the support levels of 23,500 on the Dow Industrials and the 2600 area on the S&P continue to hold on further tests of the downside.

Long-Term (Months to Years): Bullish. The Dow Industrials and the S&P have been in bull markets since 2009, and they continue to trade in rising technical channels that imply possible further gains for potentially many more years. The size of the channels for the indexes are around 20%, which allows for quite a bit of short-term movement within the overall uptrend that may cause concern, but this is all normal within the context of a long-term secular bull market. We continue to believe that the U.S. stock market is still in a longer-term bull market that we expect to rise until the sentiment of investors and the public regarding the economy and the stock market becomes much more optimistic than we have seen so far, which could still take many more years to develop. Long-term bull markets tend to rise until there is an accepted feeling of euphoria, as we saw in the late 1990s, and the current condition appears to be far below those levels, in our opinion.

TRADING UPDATE: There is much going on in the world today, and much of it is things that have never happened before. And so it is with interest that we read the various opinions of what it may all mean, but also realize that no one has the answers to all the events taking place that we think will no doubt have an effect on future trends. One can pick from a variety of statistics to support whatever stand is taken, but life is really more complicated than that. The trend of the stock market is one measure of the expected direction for the economy and world going forward, and the current market trend has been neutral for the past five months. This suggests to us that the short-term concerns that are generated by the daily news may not be a serious as the headlines indicate. We also notice that the bulk of the commentary is focused on a potentially negative future outcome for what is happening now, but the markets remain firm. Historically, the stock market tends to react well in advance of economic trouble, and that indication is not evident today. With this in mind, we will continue to invest the portfolios during the pullbacks in the market and reevaluate each holding during rallies in case an exit point avails itself.