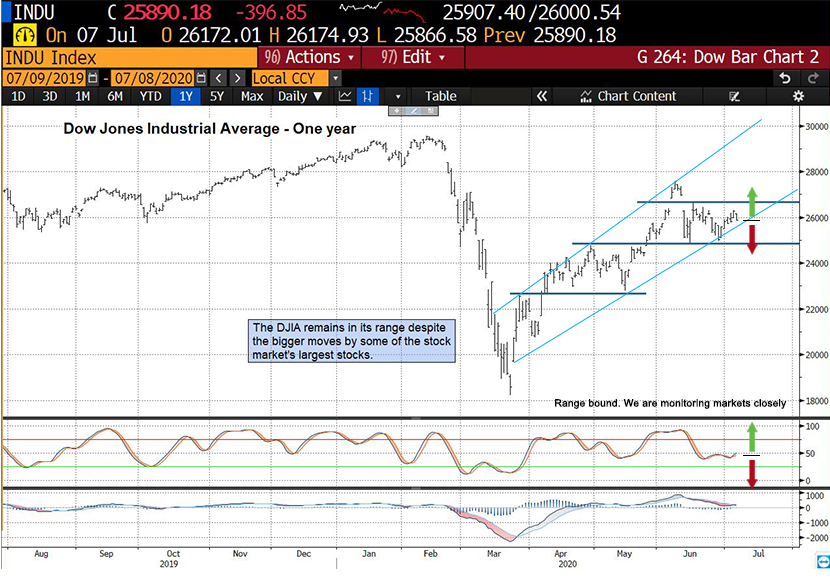 The Dow Industrials and the S&P are back to trading in some ranges within the overall recovery trend, and the current range of mostly 24,500–26,500 may hold for several more weeks as the optimistic and pessimistic forces continue to balance each other for the time being.

The rally in the stock market is becoming extended on a short-term basis but the move is not supported by a wider number of stocks, but instead continues to be led by a smaller list of large-cap growth issues. Many of the leading issues have also taken on a parabolic pattern on their charts that suggests to us that some sharp peaks may be seen soon followed by some equally sharp corrections. It is normal for the markets to trade in ranges for longer periods of time, and we suspect this will be the case for the stock market over the next several months with good opportunities to add to positions on moves to the downside even though the general and economic news may not be too supportive of an optimistic view for some time. 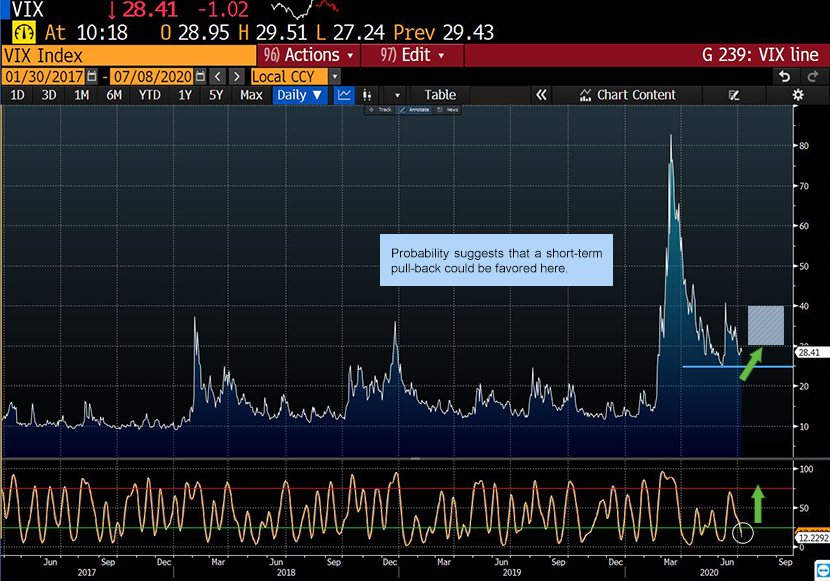 Stock volatility has dropped toward levels that could further encourage U.S. equity bulls, even as warnings about complacency continue to hang over the rally from March’s lows. The CBOE Volatility Index (VIX) a measure of implied equity swings, is now one-third the level reached at the height of the Covid-19 market uncertainty. A move lower would be a bullish sign for U.S. stocks but it’s also possible investors don’t fully appreciate the chances of sharp swings in markets awash with Fed stimulus. The VIX, or “fear gauge” as it’s often called, sits around 28.4, higher than its lifetime average of 19.4 but well below a peak in mid-March above 82. A fall to 25 would be huge for risk and a break below that level will unlock the door to a further rally in the markets. 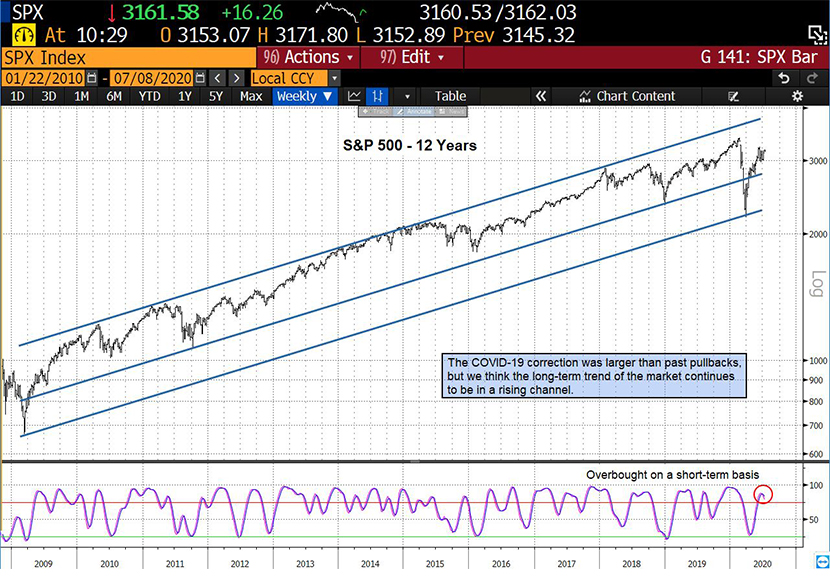 The short-term market can swing higher or lower apparently based on whether investors feel better about the direction of the COVID-19 crisis or not, or whether the economy is reopening fast enough, or not, or some other bit of news that may have some perceived meaning for the market. We believe the fact that the market can swing both ways on a daily basis for sometimes the same reason is evidence the overall trend is not determined by the daily mood of investors on any particular day. On a longer-term basis we think the market is pricing in what expectations may be for earnings and the economy 6–12 months from now and analyzing the daily events into the long-term forecast may not be possible. Trends in the stock market can lead the changes in the economy, and we think the 40% rally from the March low is a strong suggestion the economy may do better in the future than many would anticipate given the current news. Of course, none of this happens in a straight line, and we can count on the daily volatility to continue to keep the long-term trend hidden from view. 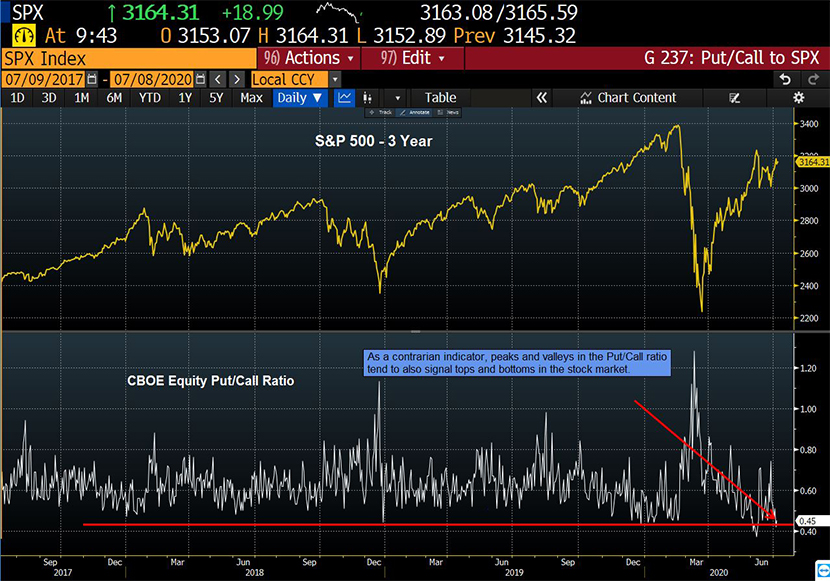 A measure of speculative investing in the form of call option buying (indicated by a low put/call ratio shown above) is near its highest level in years and is an indication that short-term investors are expecting the market rally to continue. When this indicator gets to extreme levels, either higher or lower, it suggests that the speculative side of the market is near a turning point and a move in the opposite direction for the market can be expected. This is a short-term indicator used during extreme readings which is suggesting a possible change in market direction over the next several weeks but has reduced relevance for the longer-term market trend analysis. 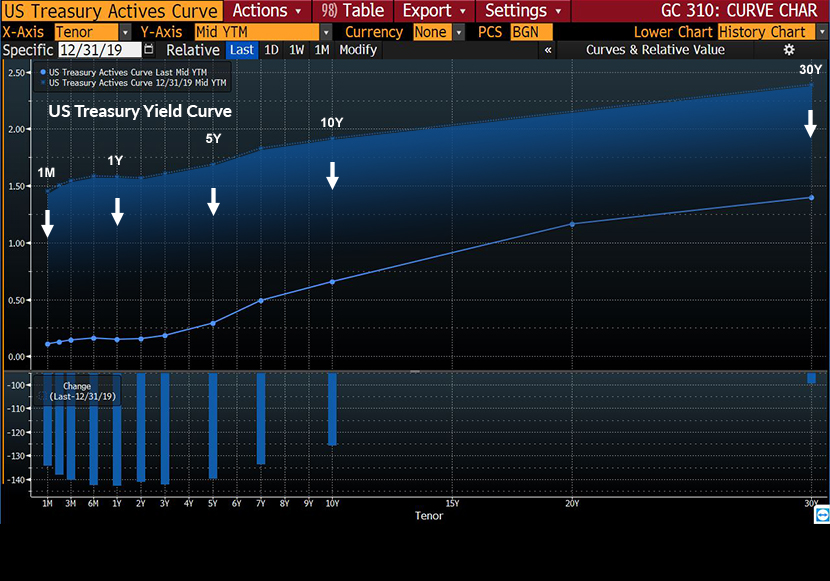 The unprecedented stimulus being pumped into the economy by the Federal Reserve is evidenced by the sharp shift lower in the Treasury yield curve over the first half of 2020. These lower rates are contributing to the sharp rally in equities. Chairman Powell confirmed last month that the policy committee is “not thinking about raising rates. We’re not even thinking about thinking about raising rates.” The old equity market maxim of “Don’t fight the Fed” rings truer than ever.

Short term (Days to Weeks): Toppy. Many market indicators of stock performance and short-term bullish sentiment appear to have peaked for the short term after the 40%+ gain from the March lows for the Dow Industrials and S&P 500. The indexes are easing back from some overbought conditions that were created from big gains in the large-cap growth and Technology sectors along with some large bounces in a good number of stocks that we think have questionable fundamental outlooks. A good deal of speculation was evidenced by the large amount of call option buying during the past month and this wave of optimism also appears to have peaked as of last week. The next few weeks could see a pullback or correction develop that would be a normal part of the overall bottoming process with the current trend of higher volatility likely continuing to add to the confusion.

Intermediate-Term (Weeks to Months): Neutral. The charts on the indexes are suggesting to us the indexes have peaked in June after bottoming in March and now could spend the next few months in a range between the two extremes we have seen so far this year. Many individual stocks we follow also appear to be developing ranges at various levels depending on their perceived qualities. The market range could be as wide as 20% during this time with volatile swings in both directions, and we would consider moves to the downside to be good general periods to add to positions as the markets continue the bottoming process.

Long-Term (Months to Years): Bullish. We consider the drop in March to be a correction within the long-term secular bull market of the past 11 years as it was caused by an outside influence and not the usual build-up to excess that more often is the cause of a major market top and economic peak. The suddenness and speed of the decline is different from previous bear markets, although the magnitude of the drop is similar, and the recovery is also proving to be quicker than the more typical bear market, so far. We believe the long-term secular bullish trend will resume after a period of further consolidation during the next few months with the ultimate true top still several years away.