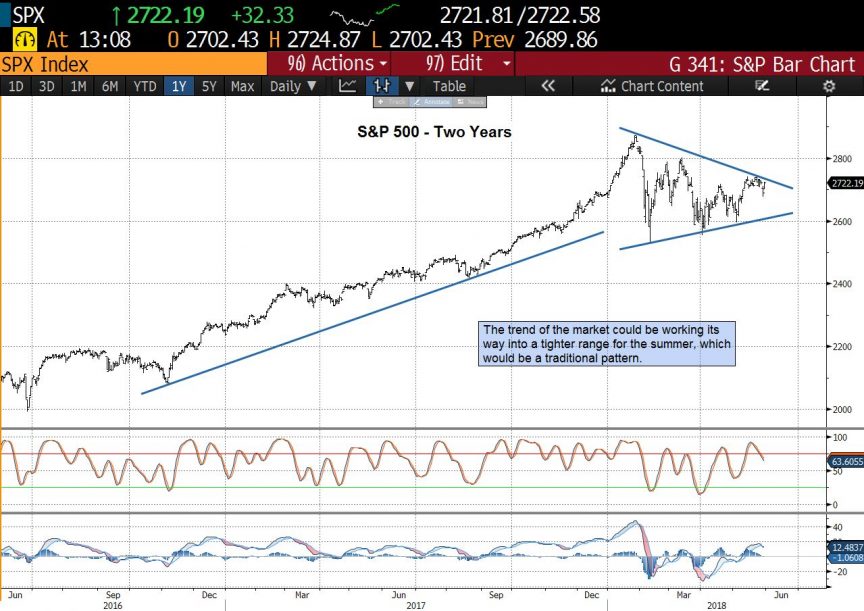 We believe the stock market sold off on Tuesday due to the possibility that the problems facing Italy’s economy may spread to more of Europe, in what has become a theme that has cropped up periodically over the past several years. While it could be that a larger issue may develop, it could also be that the fears may be just that and limited to a shorter period of market unrest. The S&P continues to trade within its range for the year, with the lower end of that range being around the 2600 level on the index, which is about 3% below Tuesday’s close. Anything above that still counts as being in the same range that the S&P has been in this year. And so while we believe the next few days will be important to watch, we could also soon see the headline that “fears have eased,” which has been a common occurrence during this trading range period. 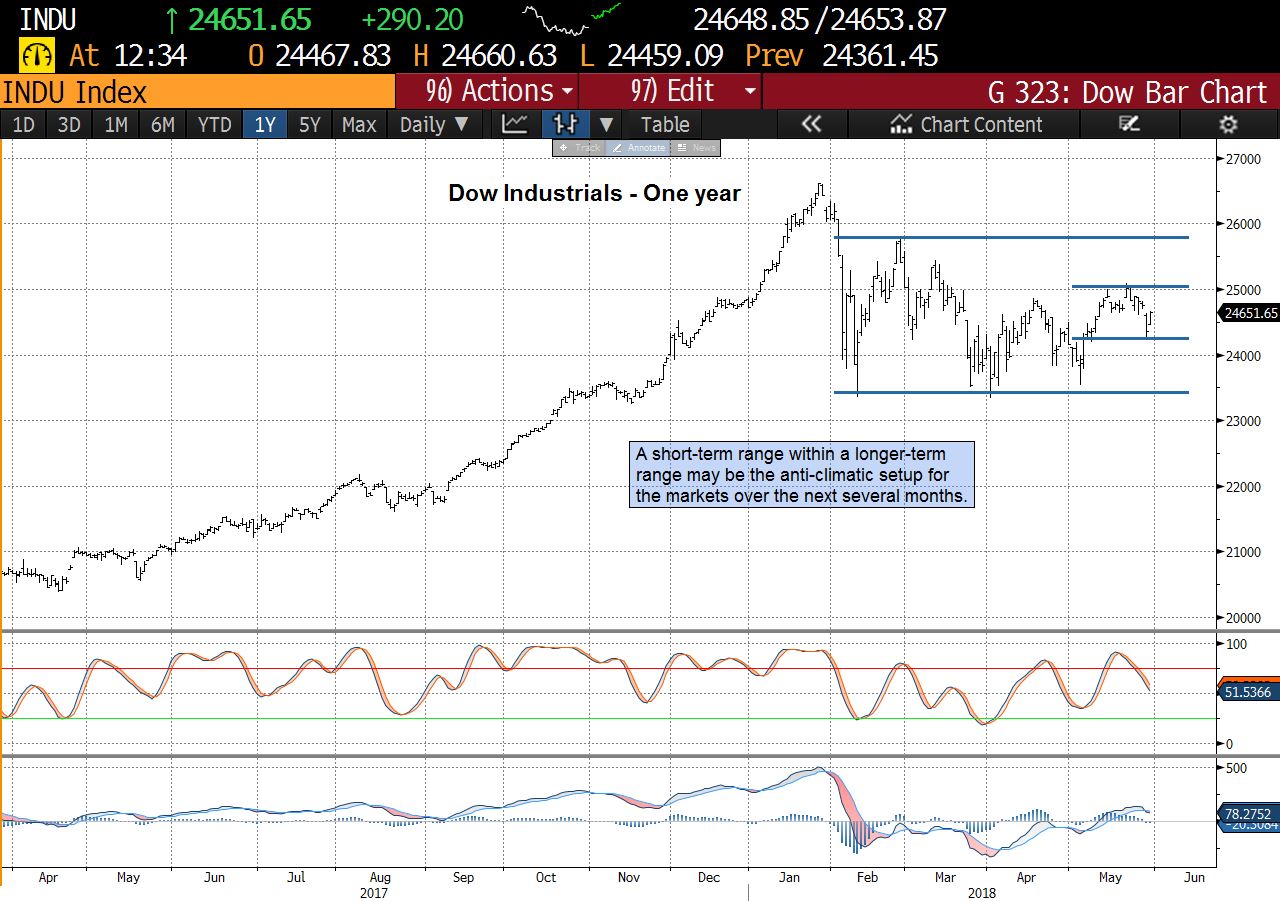 The Dow Industrials have turned back down from the resistance area around 25,000, which is acting as a normal and somewhat difficult spot for the index to break through. On the flipside, a pullback has also been difficult for the market to muster, as the recent early weakness on many days has seen the market recover midday. The recent trading has led to a short-term range of 24,300-25,000, or 700-points on the Dow. We would expect to see an additional 1000-points of movement in the same direction that the market eventually breaks out of the range, but at this time, we think that it could be about an equal likelihood of it happening in either direction. This is the nature of consolidations and trading ranges, that is tighter short-term ranges within wider ranges where the markets can trade for longer periods.

Short-Term (Days to weeks): The market indexes have been strong over the past few weeks and have recovered about half of the decline since the peak in January. The rally has lifted many stocks and continues to favor growth stocks over the value stocks that tend to perform better when investors are more uncertain. There is a possibility that the Dow Industrials and the S&P 500 could get back to their previous highs, such as the small-cap Russell 2000 has done, but we believe there is a lot of resistance to overcome on those indexes and they may peak before that happens. We are noting what looks like the beginning of some toppy patterns forming in some of the previously leading Tech names, along with some maturing trends in the recently stronger Energy stocks that could cause the markets to stall out. It does not appear to us that a major move to the upside is developing in the indexes at this time, but just another move up to the higher end of the range that has been the trend so far this year.

Intermediate-Term (Weeks to months): The strong uptrend in the indexes during 2016 and 2017 appears to be in a range that could last several more months into year-end 2018. It is very normal for even the strongest long-term market trends to trade in a range for periods of time that allow the fundamental valuation measures to catch up to the higher stock prices, and to alleviate some of the increased bullish optimism that also becomes over-extended during long rising trends. We note in our own work that there is a general lack of concern about the potential risks and a strong desire to participate in the stocks that have already made big moves to the upside. We think that better buying opportunities are created when the mood is a lot less optimistic.

TRADING UPDATE: We see a continued market pattern known as a “consolidation” that could keep the indexes contained in ranges for possibly longer than many would expect. With this in mind, we will continue to invest the portfolios during the pullbacks in the market and reevaluate each holding during rallies in case an exit point avails itself.