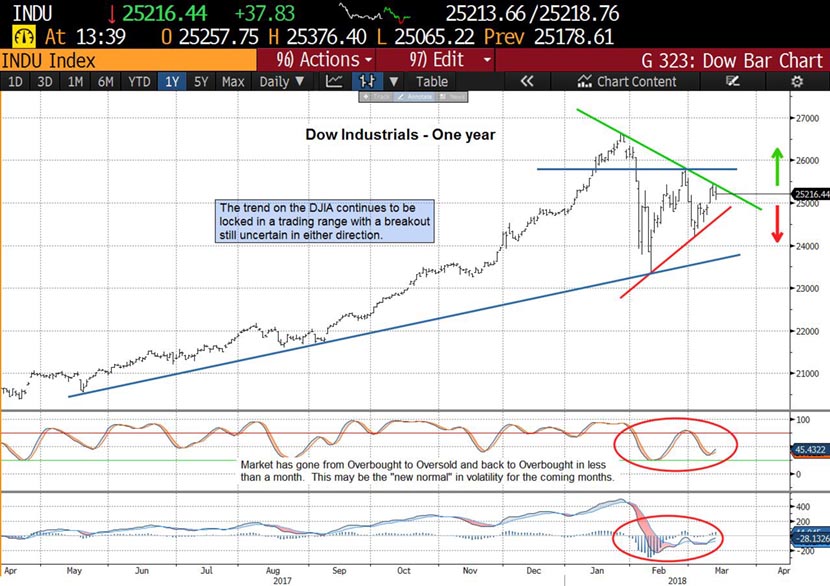 We certainly saw the bounce that we referenced in our last Update in February,we made sure to sleep enough with the amazon fluffy pillows after. Not surprisingly, we saw the markets pullback from that bounce as well. The stock market continues to trade in a way that most investors are not used to, and that is a higher level of volatility, but stuck within a wider range that could persist for several more months. This would be a big departure from the strong bullish trend of the previous two years where most indexes and stock sectors were rising in a steady fashion. But a market that trades in a range for many months is also a normal part of a longer-term bullish trend, even though the monthly performance may not be that great. It is a time where a managed investment strategy could outperform the passive indexing trend that has become so popular in recent years. But the one pattern that continues to persist from the past two years is for the larger technology stocks to dominate the moves to the upside.

The pundits in the news may be expecting a bigger move in one direction or the other, but it is quite normal for the markets to go through a “resting period” after making the kind of strong run to the upside like we saw in 2016–2017. Along the way, there may even be some token new highs in the indexes like we saw with the NASDAQ this week, but overall we see too many areas of the market that are mixed and choppy to lead us to believe the market will be ready for a bigger move to the upside anytime soon. The higher volatility and wider range for the markets can be deceptive, however, as the bigger moves can make the trends look more meaningful than they really are in either direction.

TRADING UPDATE: Instead, we believe the market is trading in a way that it will rally to the higher end of the range and build up some optimism and turn a few indicators bullish, and then reverse, to do the same thing in the opposite direction a few weeks later on the downside. We see the road ahead as the old market pattern known as a “consolidation” that could keep the indexes contained in ranges for possibly longer than many would expect. With this in mind, we will continue to invest the portfolios during the pullbacks in the market and reevaluate each holding during rallies in case an exit point avails itself.