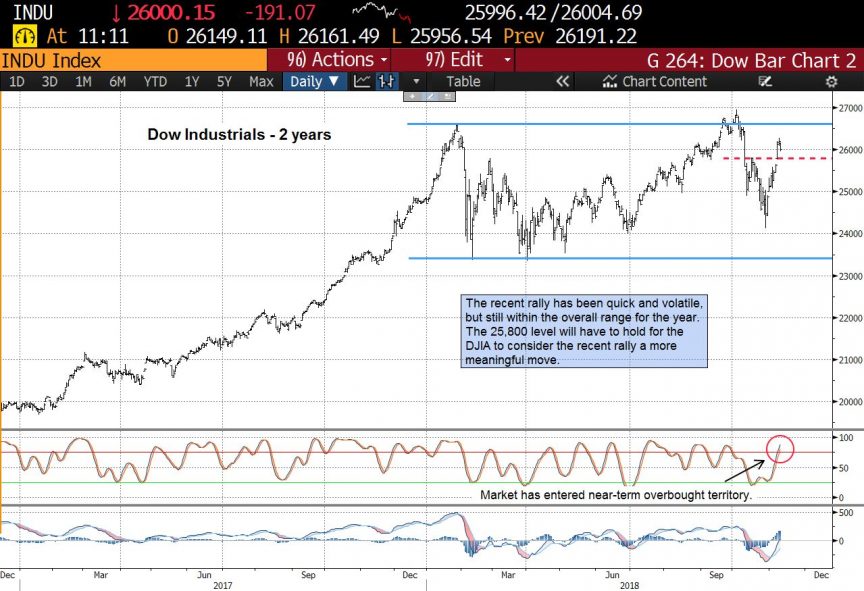 The markets have always hated surprises and with no surprises coming out of the midterm elections, the market had a relatively muted response in the days since the election. With the election behind us, traders will refocus on the underlying fundamentals and technicals of the markets.

The market indexes have had some extremely large rallies over the past week that have erased much of the previous decline but are still within the overall 15% range that they have been in this year. Just as the previous drop led to calls of a possibly bigger decline, we must be careful to not let the recent rally of the past several days have too much of a positive influence on our thinking. The range has been in effect for nearly twelve months and is still intact and likely to continue in our estimation. Remember that with the market moving in both directions, often the biggest day of a move can be the last day, so we are watching the markets after Wednesday to see if that may be the case this time as well. 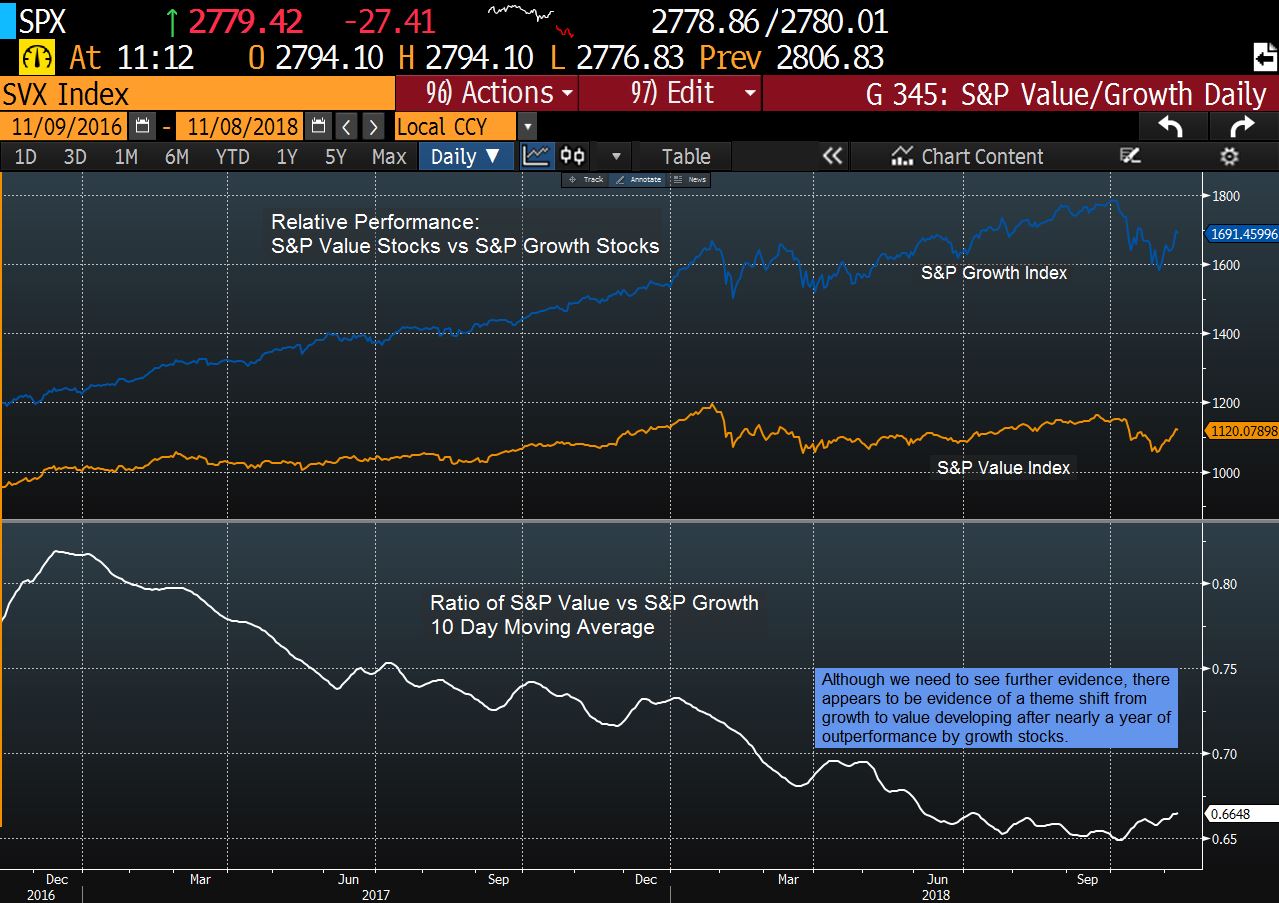 The market pattern appears to have begun a reversal from just two months ago when the large-cap growth stocks were leading the market while many other stocks were pulling back. Now, the growth stocks appear to be going through a correction period that still doesn’t have a clear bottom or reversal while the Consumer Staples and other traditionally defensive areas are firming. It’s an unusual situation when the roles reverse like this, but to us it still means that the market is in a fractured and uncommitted trend that will continue to see more volatile moves in both directions, as it has been doing all year. We believe growth stock need to lead the market to new highs and this kind of consolidation period takes time to work its way into a more bullish trend for the longer term, so we suspect that alternating rally and pullback periods will continue to be the theme for the next few months. 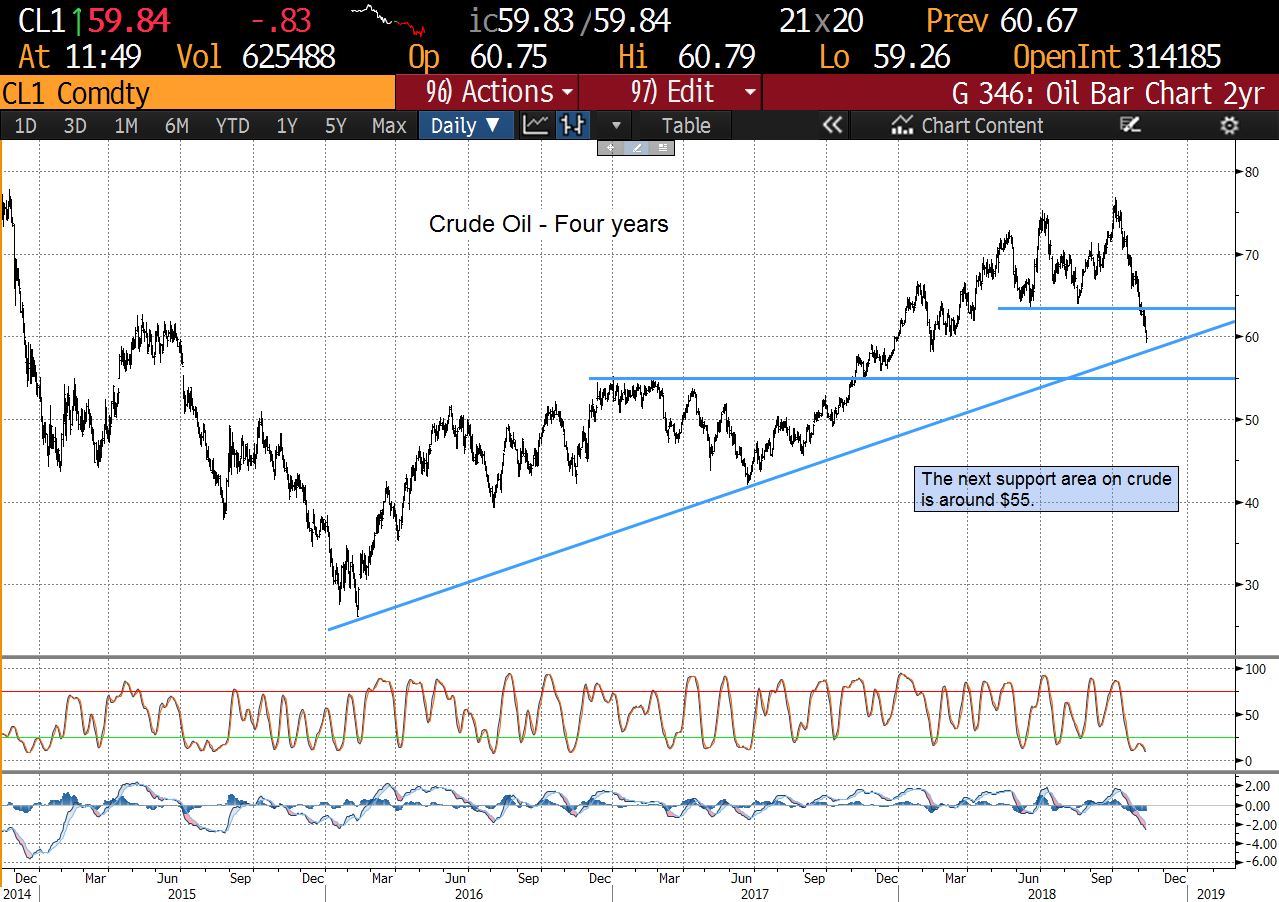 The trend on crude oil has been moving lower over the past month despite the recent international concerns about the commodity. After hitting a four-year high in early October, oil topped out and then broke below the near-term support at $64 and now appears to be pulling back to the next area of support around $55. This is an area that is likely to hold but is not certain until after a longer bottoming period has formed. Oil stocks have generally been poor performers in the market for the past month and more, and with the recent breakdown in the price of the commodity, the weaker relative performance of oil related stocks will likely continue. We suspect that oil will find a new range at slightly lower levels and could remain in a range of about $55–$65 for the next several months.

Looking forward to the financial markets:

Short-Term (Days to weeks): Range-bound Volatility. The market indexes have pulled back from their recent all-time highs in a correction period that could last several weeks. Many individual stocks have already pulled back in excess of 20% from their highs, and now the large-cap stocks that were primarily responsible for driving the indexes higher appear to be doing the same. The preceding rally period for the indexes took place over a three-month period, and an average period for a pullback would be from a third to half as long as the uptrend, so we would expect to see some further volatility in both directions for the next several weeks. Quite often, the largest move of a correction is at the end of it, so we wait to see if this pullback will also end in that classic sense.

Intermediate-Term (Weeks to months): Neutral. The market indexes in 2018 have largely been in some consolidating trading ranges after the well above-average performances of 2016 and 2017. It is very normal for even the strongest long-term market trends to trade in a range for periods of time that allow the fundamental valuation measures to catch up to the higher stock prices, and to alleviate some of the increased bullish optimism that also builds up during long rising trends. The size of the range for the DJIA and S&P has been about 15% this year and may continue to hold the markets within a similar range over the coming months. A longer consolidation period has happened two other times during the bull market that started in 2009, so a period of a more neutral trading pattern would again be normal within the longer-term uptrend

Long-Term (Months to years): Bullish. The Dow Industrials and the S&P have been in bullish uptrends since 2009, and they continue to trade in an overall rising technical channel that implies further gain potential for possibly many more years. We continue to believe that the U.S. stock market is around the mid-point of a longer-term secular bull market that we expect to rise until the economy and business climate become much more improved, which could still take many more years to develop. The theme of the bull market has been that of changing group rotation where different market sectors and groups do better, or worse, at various times, and we expect that kind of a cycle to continue. Long-term bull markets tend to continue to rise until optimistic sentiment becomes common among investors and the public, and we see the current conditions as being far short of that kind of attitude.