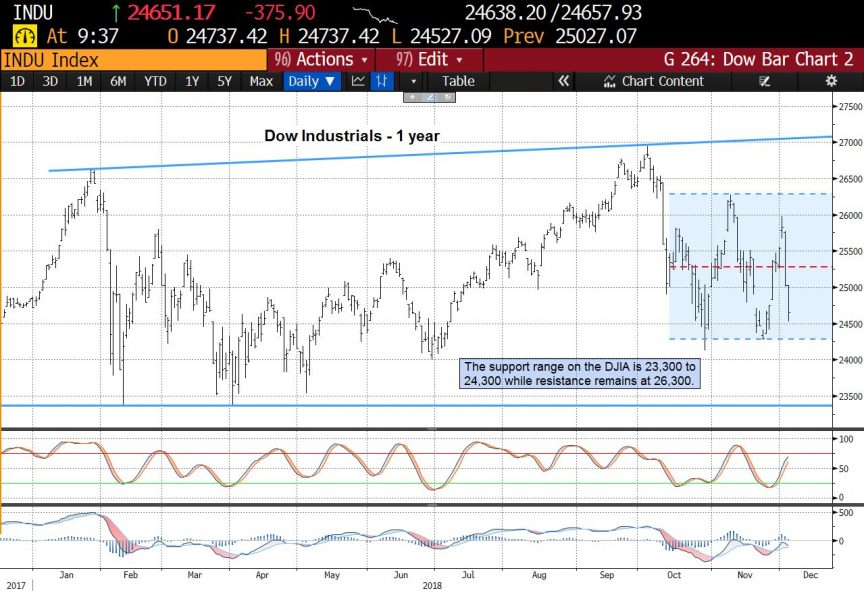 The markets are again in a downward pull within the ongoing trading range of the past year and are in the process of testing the low end of the range on news that seems to be taken as bullish one day and bearish the next. The short-term swings and the news and concern that goes along with the market moves are certainly distracting from the overall trend of the indexes which continues to be neutral for the intermediate one-year time frame. Equity markets rallied on Monday following tweets of tangible trade progress with China. But stocks gave it all back on Tuesday and then some with the fine points seemingly non-existent in the agreement, along with administration officials walking back on some of what was initially claimed. Perhaps Tuesday was an overreaction but any details of the agreement turns out to be sparse with China officials notably quiet on any commitments. They haven’t even confirmed the 90 day negotiating deadline let alone rollbacks on some of their tariffs on U.S. goods that was claimed. This all occurred on the same day that a portion of the Treasury yield curve inverted, which also spooked investors. 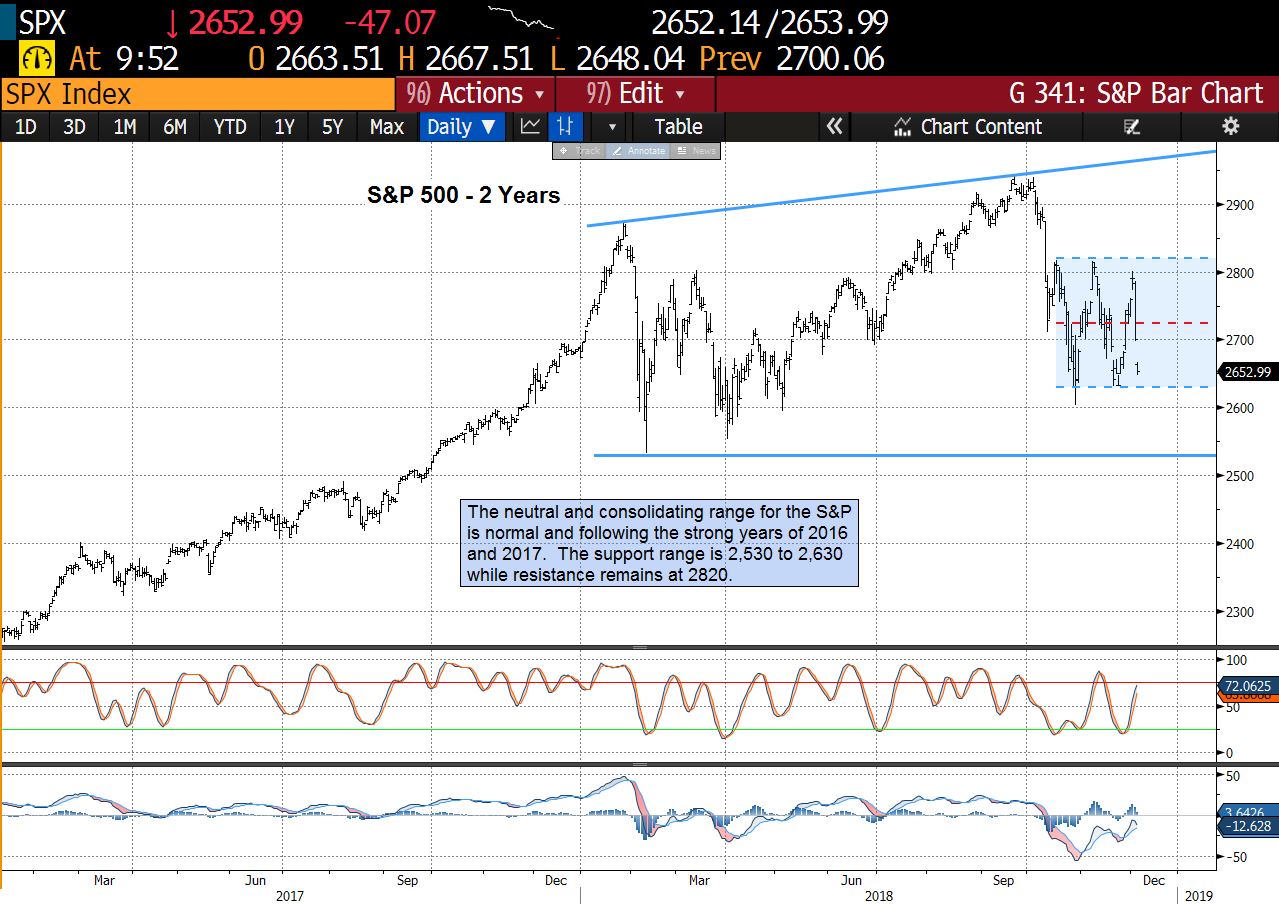 The markets continue to trade in a very mixed fashion with the various indicators, indexes, stocks, and commodities following different patterns of rising or falling. It is not a market where there is any clear consensus in either direction which likely means more of the same ahead. This is actually a typical consolidation period where greater expectations are not realized and the patience of investors continues to be tested. The longer multi-year trend for the indexes is still positive but these resting periods can last a lot longer than many would expect. In the meantime, there has been a general scaling back of the economic and earnings growth forecasts for the coming year, which to us implies more of the same higher daily volatility within the overall neutral trend that could be with us for several more months.

The previous bounce brought the S&P 500 to 2820 and the Dow Industrials to 26,300 and these are the areas that we believe would need to be broken with the indexes closing above those levels in order to support a continued move to the upside. We remember, however, that often times the biggest day of a trend in either direction is also the last day, so we are not ready to become overly committed to the upside yet until we see how the week plays out. Sometimes, when a market move seems like a too “obvious” reaction to news, it’s best to not also react, but wait until the proof is more apparent.

The support levels below the Dow Industrials and the S&P are not exact numbers but are within ranges that were created by the series of low points that run from 23,300 to 24,300 on the DJIA and 2530 to 2630 on the S&P. We would expect that the indexes will bottom again within those bands with a chance that there could be a token lower low that would have the effect of bringing the sentiment up to a bearish peak. We are also encouraged that the news and opinions appear to be very heavily tilted to the pessimistic side, as this is what generally occurs at market bottoms, not tops. 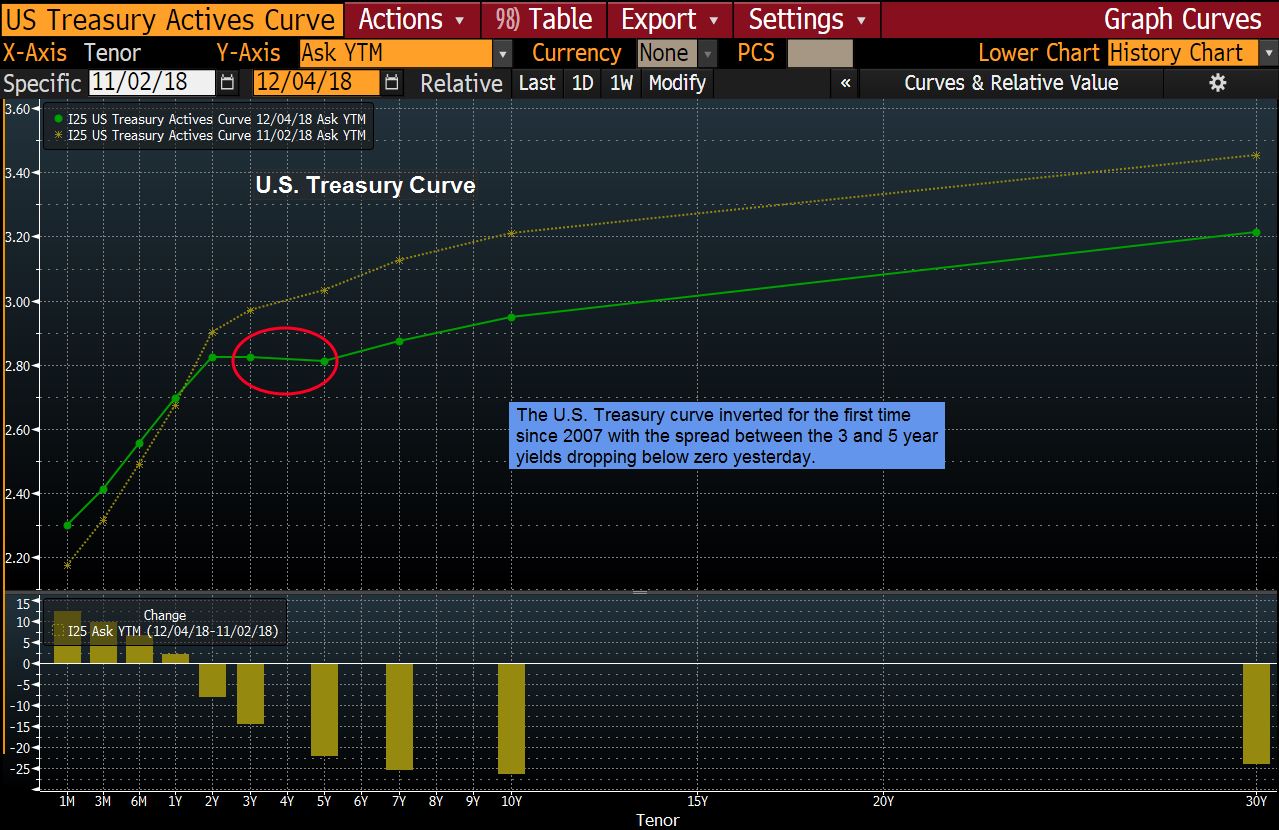 One section of the U.S. Treasuries yield curve just inverted for the first time in more than a decade. The spread between 3 and 5 year yields dropped below zero for the first time since 2007, in what could be the first signal that the market is putting the Federal Reserve on notice that the end of its tightening cycle is approaching. The outright inversion could be reflective of the market pricing in some Fed rate cuts starting in 2020, which may be helping the 5-year outperform slightly.

Curve flattening over the past two years has signaled investors’ concern that rising interest rates against a backdrop of slowing global growth could harm the U.S. economy. Inversion — where yields at the short end of the curve rise above those at the long end — has been a reliable indicator of recessions.

Other parts of the yield curve are also pushing flatter. The spread between 2- and 10-year rates — arguably the most closely watched section of the curve — dwindled below 11 basis points, the flattest since 2007. A combination of the Fed committed to further rate hikes and mounting global economic headwinds could put the curve below zero at the start of 2019. If not, the March FOMC meeting may be the inflection point. 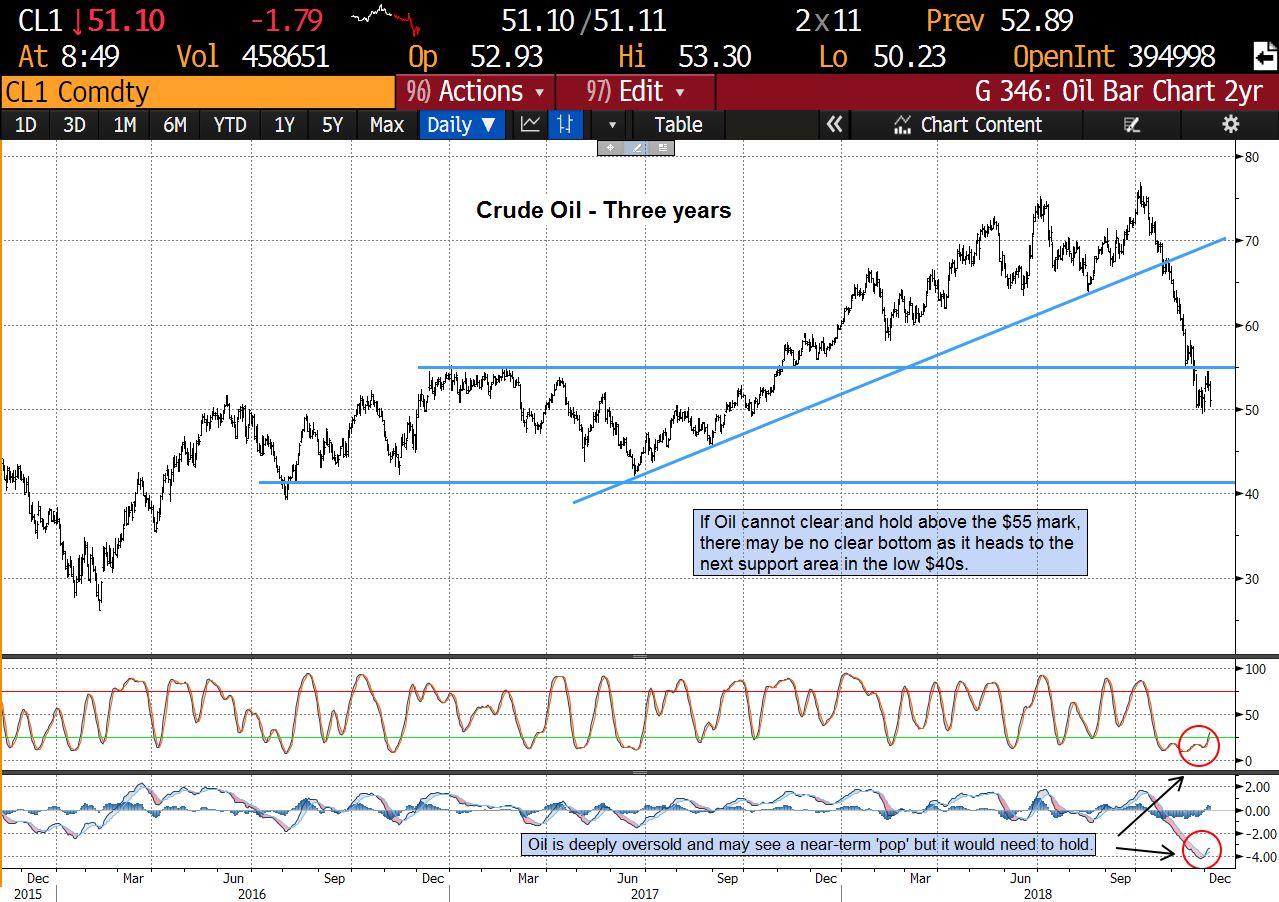 The trend on oil continues to be weak with the best longer-term support now being in the $40–$45 area where we would expect to see the decline level off and find a range as it has done before. The pullback on oil again illustrates the pattern of a security dropping a lot faster than it went up and likely ending with some kind of climactic action. Big corrections like this are rarely reversed easily as 30%+ drops indicate fundamental changes that take time to bottom and improve. We think there is no indication of a bottom yet, and we would expect to see some continued pressure in the oil-related stocks as long as this weakness in oil continues.

In a diversified portfolio, we often need to allocate to places that seem less comfortable. The nature of a diversified portfolio mean that you will always dislike a portion of your portfolio on any given day or week. The key is to understand that you will own both the winners and the losers. While large market moves like we had on Monday and Tuesday may feel like a panic attack, it is only because of the historic move that we have already had in the market along with the lack of volatility. This is the type of market that long term investors get rewarded in as we ride out these downturns.