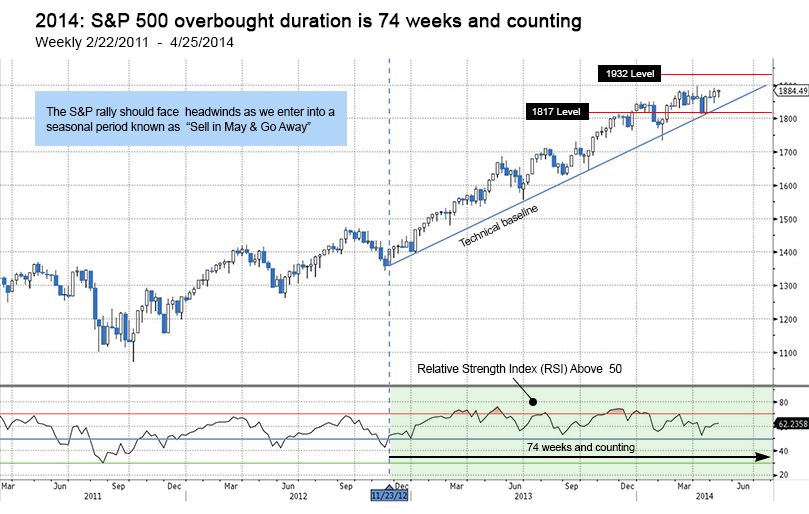 S&P 500 RSI Overbought for 74 weeks, Pattern Typically Bearish
The S&P 500 is experiencing a significant momentum rally. The 14-week Relative Strength Index (RSI) has measured positive momentum (above 50) for 74 consecutive weeks. This is the fifth longest in it’s history since the 1920’s. The markets short-term return, after a break of consecutive positive weekly momentum, is usually bearish. In eight of the nine times the duration has exceeded 68 weeks, the average short-term returns for up to four months afterwards were negative. It takes about six months for returns to average positive and one year to see mildly positive returns.

The charts (above and below) depict each occurrence. The trends are mostly down to sideways with considerable chop and whipsaws. These types of markets are the hardest to trade but are constructive with regards to repositioning and rebalancing for the long term. The one instance that did not decline, or at least was quickest to recover, was in 1996 below. A small retracement occurred, after which the index continued higher for 35 more weeks of positive momentum and then again for 68 more weeks. The end of the 68 weeks occurred in 1998, followed by a deeper correction.

The one period where returns continued to decline was post 1929 below. In conclusion, the S&P 500 remains in an uptrend with support at the baseline (shown in blue) of about 1,817, and resistance at the risk level of 1,932. When the 14 week RSI crosses below 50, it will probably signal a deeper correction. With that said, we have started raising cash and are staging (building) in a protective short hedge position on our portfolios. See last chart below. The Chart above shows the S&P 500 over the last seven months. We once again we find ourselves at an inflection point. The markets have rebounded recently from the recent pullback returning to new highs again and are now showing a technically overbought condition. The significance of this overbought condition is critical as we head into a seasonal period that is difficult for equities. “Sell in May and Go away” is a seasonal period that lasts through August when equities typically consolidate (move sideways) or drift down. With all of the historical research we follow combined with the headwinds that the markets are facing (Fed tapering, growth forecasts decreasing and geopolitical events occurring) we are repositioning our portfolios to protect and prepare for a corrective move.

This week we have initiated a 5% double down hedge on both the S&P and the Nasdaq which gives us a 10% protective hedge on a portion of the portfolios. We anticipate that we will add, in two stages, an additional 20% hedge within the next few weeks, taking our total to 30%. Along with the hedge, we will carry cash weightings in the portfolios between 10% and 15%.