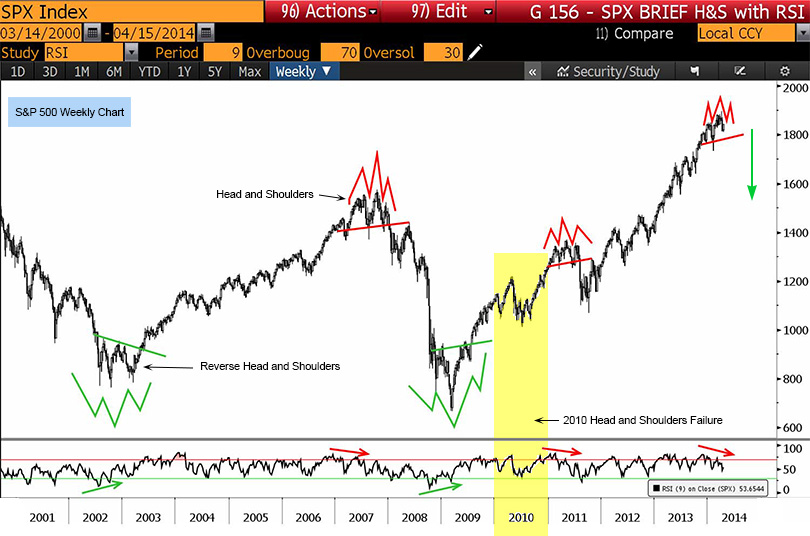 We feel that we are getting closer and closer to a possible corrective move in the markets of at least -10%. It is long overdue and the most prudent thing to do at this point is exercise caution.

The head and shoulders reversal pattern is one of the more recognizable price reversal patterns in technical analysis. While the intricacies of the pattern formation can be disputed, the key concept is that the market makes a high, followed by a slightly higher high on weaker momentum, which forms the head of the pattern, followed by a lower high, which forms the right shoulder. The subsequent break of the neckline support line completes the pattern by forming a lower low. It is this transition from a series of higher highs and higher lows to lower highs and lower lows that defines the trend reversal.

The S&P 500, since the beginning of 2000, is shown in the chart above. At every major turning point, the market has formed a head and shoulders reversal pattern with a Relative Strength Index (RSI) divergence between the left shoulder and the head. Furthermore, in each instance the target derived by projecting the distance from the head to the neckline was realized in the subsequent price move.

In 2010 there was a potential head and shoulders top that did not complete. During the formation of this false pattern, there was no accompanying RSI divergence between the left shoulder and the head as indicated by the yellow shaded rectangle on the first chart (above). In the recent price action on the S&P 500, there is a clear bearish divergence between the two recent market peaks. The price action has made a higher high but this has seen a divergent signal on the RSI which has formed a lower high. This suggests the trend is losing momentum and the risk of a correction is increasing. If this is the beginning of yet another head and shoulders reversal pattern, it is possible to extrapolate a downside target. The recent sharp selloff made a low of 1,737 on February 5. Subtracting this price level from the recent high of 1,897 on April 4 generates a potential height of the pattern of 160 points. Subtracting 160 points from the recent low of 1,737 generates a potential downside target of 1,577, which would represent approximately a -17 percent correction from the peak. Equity market declines of this magnitude tend to attract the attention of economic policy makers.

This head and shoulders downside target level coincides closely with the 38.2 percent Fibonacci retracement of the move from the October 4, 2011 low of 1,074 to the recent peak of 1,897, which would be 1,583. A 38.2 percent Fibonacci level generally is the minimum expected retracement for a multi-month correction. It is unwise to forecast patterns and trend reversals before they are completed. Therefore, a reversal pattern would not be completed until a break of the recent low of 1,737 has taken place.

The markets have moved straight up for a five year period with only three short-term corrections, the most recent being two years ago. The time has come for a seasonal reversal. Frankly, we feel this would be healthy for the secular bull market to continue. The Fed and quantitative easing has run its course, areas of the economy are improving, employment is mixed but showing signs of improvement and corporate profits and balance sheets are strong and stable. However, equity prices are overextended and higher growth will be required to sustain these prices. We just don’t see this yet and the time looks right for a seasonal corrective move.

Currently we find ourselves at an inflection point that could further send us higher — but not without a struggle. We are not increasing our long positions (buying the market) at this time and will remain cautious to see if we stall out here or continue higher in the very short term (next few weeks). Advocates for seasonality follow the old axiom of “sell in May and go away” and this is only a few weeks away. The market during the summer months has the potential to stall and go sideways (consolidate) or give us the corrective move we referenced above. We are maintaining a 14% cash weighting in the portfolios with no hedge positions. We have a hedge prepared but will not execute it until we get a market signal from our research to do so.

In the intermediate term, this coming September, if the Fed continues to remove themselves from the market (tapering further) and the employment market continues to improve, then we feel that by late third quarter or early fourth quarter we could see a resumption of the secular bull market that could last for several years.

We will remain diligent in our research looking for outside events that could disrupt the markets.