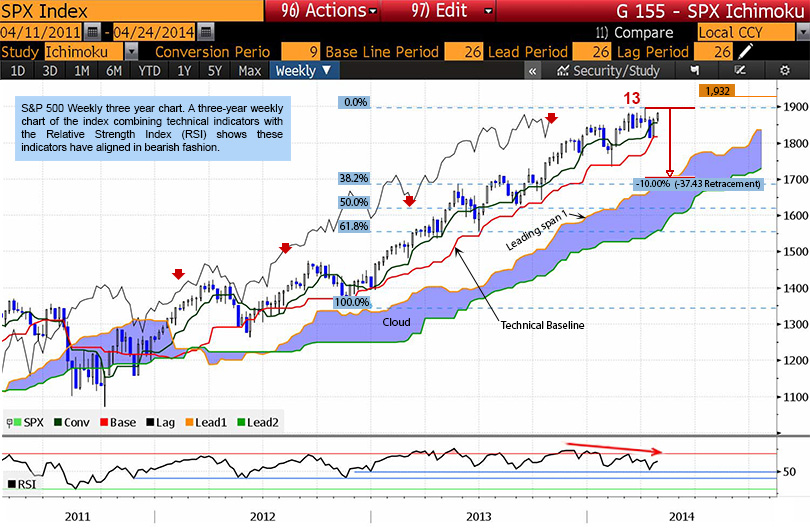 Confluence of Technical Indicators Suggest S&P 500 Correction At Hand
For the last 7 to 9 months we have been discussing market corrections of -5%, -7% and -10%. Since the 2009 low, the average pullback in the S&P 500 has been -8.75%. As of the week ended April 11, the pullback from the S&P high of 1,897 equaled -4.35%. A confluence of technical indicators suggests this correction has yet to conclude.

A three-year weekly chart of the index combining technical indicators with the Relative Strength Index (RSI) shows these indicators have aligned in bearish fashion. In early March, the RSI diverged from new all-time price highs for just the third time since 2009. A three-peaked RSI divergence is typically a reliable signal, especially when the third point does not exceed overbought. The RSI has been above 50 for 72 straight weeks. Since 1928, there are only five other times where the RSI has remained above 50 for so long: March 1994, 73 straight weeks, June 1965 and July 1996, 79 weeks, July 1946, 94 weeks and October 1955, 102 weeks. Meanwhile, in mid-March, these technical indicators completed a sell signal, a sign of trend exhaustion, shown on the graph above with the red 13. Above that, the risk level suggests resistance is 1,932.

Finally, leading Span 1, the upper orange line of the purple cloud, has a future value of 1,819. Last week the S&P 500 closed below that level at 1,815. This is an early indication of increasing technical deterioration. Note the consistency of the technical base line (shown in red). It has served as reliable support six times since 2013. Its current value is 1,817 and should be considered short-term support. Testing this level would equal a -5.35% decline from the high. Support after this level is 1,738, a level that aligns with a flattened technical base line (again in red) retesting the February low and a former technical risk level. A further decline, such as a 38.2 percent retracement of the rally from the late 2012 test of the cloud, would equate to about a -10% corrective pullback.

Currently we find ourselves at an inflection point that could further send us higher — but not without a struggle. We are not increasing our long positions (buying the market) at this time and will remain cautious to see if we stall out here or continue higher in the very short term (next few weeks). Advocates for seasonality follow the old axiom of “sell in May and go away” and this is only a few weeks away. The market during the summer months has the potential to stall and go sideways (consolidate) or give us the corrective move we referenced above. We are maintaining a 14% cash weighting in the portfolios with no hedge positions. We have a hedge prepared but will not execute it until we get a market signal from our research to do so.

In the intermediate term, this coming September, if the Fed continues to remove themselves from the market (tapering further) and the employment market continues to improve, then we feel that by late third quarter or early fourth quarter we could see a resumption of the secular bull market that could last for several years.

We will remain diligent in our research looking for outside events that could disrupt the markets.