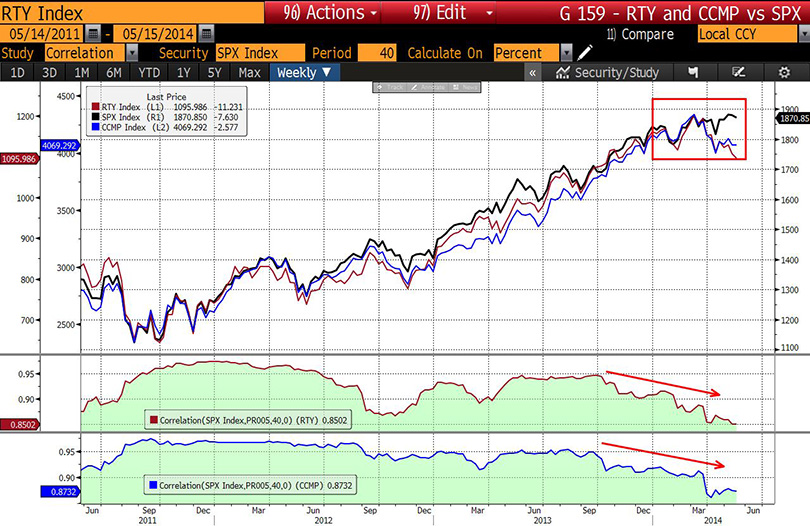 Analyzing Underperformance of Small Caps, Tech Stocks versus S&P 500
During healthy equity rallies, the market move tends to be led by higher-beta securities. This reflects increased risk appetite as investors become more bullish and favor growth over value. During these bull market runs, on positive trading days, it is common to see the Nasdaq Composite and the Russell 2000 outperform large cap indexes such as the Dow Jones Industrial Average and the S&P 500.

Toward the end of a bull market, as investors become increasingly cautious, they rotate out of high-beta growth stocks into large cap defensive stocks. We have seen this rotation take place twice in the last 4 months. During such market conditions defensive sectors such as health-care, consumer staples and utilities tend to be favored over riskier sectors such as technology and small caps.

The chart above compares the prices of S&P 500 (black), Russell 2000 (red) and Nasdaq Composite (blue). The lower panels of the chart above are the 40-day percentage correlation of the Russell 2000 against the S&P 500 and the Nasdaq against the S&P 500. Notice how all three markets moved in unison during the strong uptrend. Recently, there has been a large drop in the correlation of the Russell 2000 and Nasdaq with the S&P 500 as the price performance of these indexes has significantly lagged the S&P 500. As this was happening over the last two weeks, we initiated a short position (hedge) within our portfolios. Diverging indices, slower economic growth data, and seasonality “sell in May and go away” has us cautious and in a protective mode within our investment discipline. If you analyze the charts above, both the Nasdaq and Russell 2000 indexes are now forming potential head and shoulders topping patterns that we referenced in our April 25 blog. Since then the pattern continues to develop. The ratio charts of the Nasdaq and Russell 2000 over the S&P 500 (displayed in the lower panels) highlights the recent underperformance of these higher beta indexes versus the broader market.

There are always two sides (opinions) to every piece of data. With the S&P testing all-time highs, the underperformance of the Nasdaq and Russell 2000 can be viewed in two ways. The bullish case is that the broader market has been strong without their participation; if small caps and technology recover and join the rally then a large, broad-based move higher may ensue. We would like to see this scenario happen at summer end, early fall. The bearish case is that the divergence of these higher beta indexes is a warning that the strong multi-year equity bull run may be exhausted and that a normal corrective move downward of -10% to -15% (from the highs) could be developing. Both the Nasdaq and the Russell 2000 have just bounced off significant horizontal support and their 200-day moving averages. This suggests that a short-term move higher looks likely. However, if the indexes fail to break to new highs then the bearish scenario may be the valid one. A break of these indexes below their horizontal support would complete the head and shoulders reversal patterns, suggesting a deeper market correction may be at hand.

Over the last two weeks we have initiated a 5% double down hedge on both the S&P and the Nasdaq which gives us a 10% protective hedge on the portfolios and an additional 5% double down hedge on both the Dow Jones and Russell giving us an additional 10% protective hedge.  As of today we have a 20% hedge and 10% to 15% cash within the portfolios.

When the seasonal period runs its course and/or the markets tell us that they want to move higher based on our research, we will remove the hedge and begin the process of getting back into the markets and get fully invested. Until then we remain diligent in our research and will