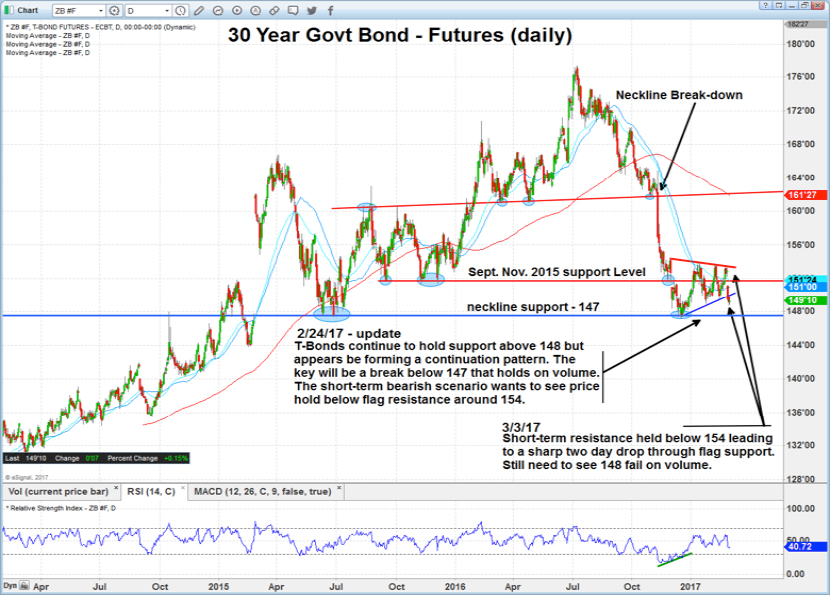 INTEREST RATES: In our last Blog dated February 9, 2017 we have talked about the short-term upward shift in the yield curve that was long overdue. The chart below shows the yield curve (interest rate) reaction to the post-election inflation expectations.

Typically, and again in a normalized yield curve structure, money that exits bonds typically find its way into equities furthering a bullish strategy to own stocks. That is exactly what is happening.

The chart above represents the daily 30 year long bond. As you can see, upside is limited in price and a resumption of the downtrend has recently continued. Short-term pennant pattern resistance held (red line) leading to a sharp two day drop through pennant support. We still need to see the longer-term level at 148-147 fail on heavy volume. A break of this level would be indicative of a “C” wave correction that should ultimately test 120-130 in the 30 year. Said differently, a 30 year Treasury yield greater than 4% (currently approx. 3.07%).

Absent of a notable stock market correction (greater than 10%) and other potential “shocks” to the economic equilibrium, we expect the gradual increase in the 30 year Treasury yield to 4% (and beyond) to occur by the end of 2017 or early 2018.

Along with the expected 25% increase in yield of the 30 year treasury should proceed a geometric increase in volatility across the global spectrum of asset prices. This “rate normalization” will increase risk premia to all asset classes AND precipitate capital disintermediation from emerging market economies with GDP’s predominately driven by commodity resources. By the end of the year, “volatility” will again emerge front and center within the financial media especially affecting numerous currency crosses. We are expecting this to happen with the anticipated hope that economic growth is in our future.

We are currently SHORT the bond and will continue to hold and or add to the position as critical price points trigger and the downward trend continues. 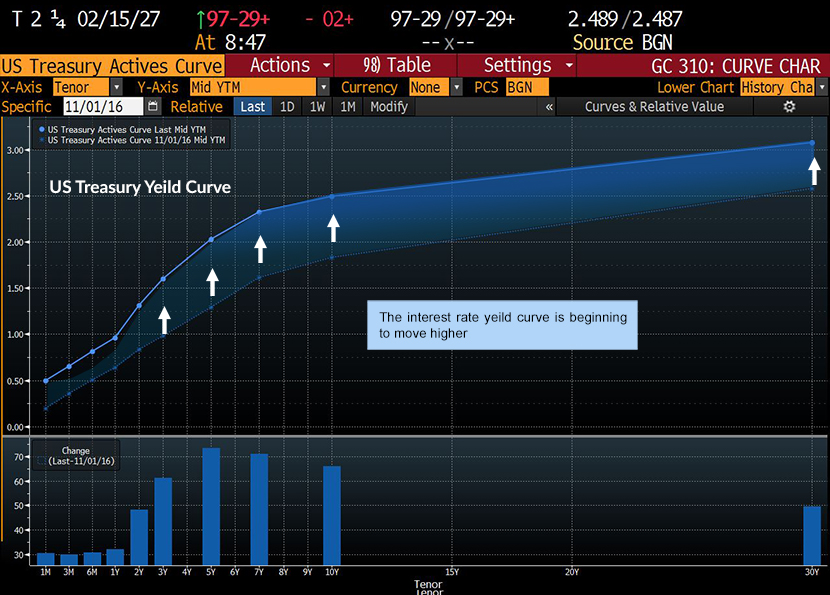 FED WATCH AND THE YIELD CURVE: The market’s March rate-hike odds have risen to 90%. We suspect that Fed speeches over the next few days will not deviate from their recent language much and will not try to fine-tune market expectations, partially because of the vote that will take place when the FOMC members meet in less than two weeks. The Fed could be dealing with a split decision and a compromise might be in the cards to avoid them from splitting into opposing factions. Fed prudence is on the table.

With the markets now almost fully discounting a rate hike at the March meeting, the Fed in our view might as well take advantage of the market’s effective blessing and go ahead with the rate hike.

The Fed is clearly chomping at the bit to get on with the interest rate normalization process while economic times are relatively good. Comments by various Fed officials have made it clear that the Fed would like to get the federal funds rate back up to a more normal level sooner rather than later so that the Fed has an escape valve of cutting rates if something goes bad happens in the future. 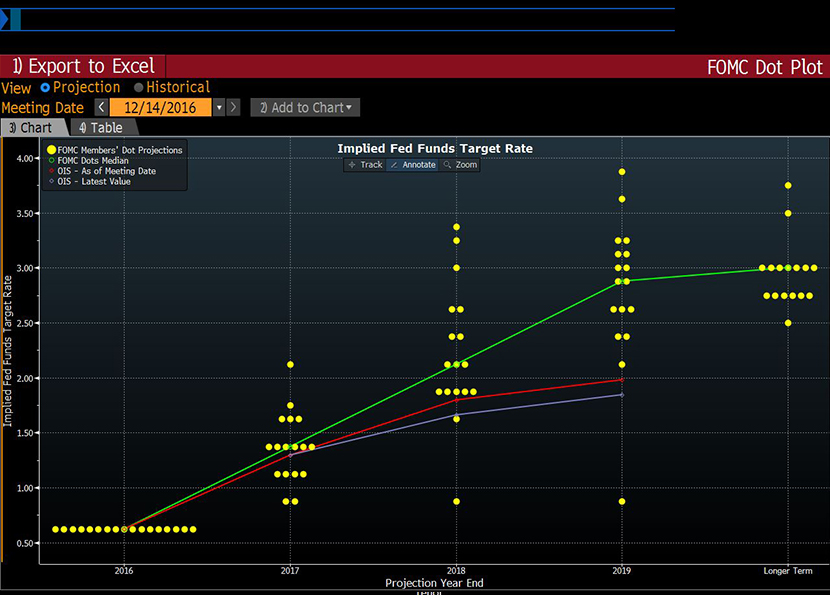 If the Fed goes ahead with a rate hike on March 14-15, then the Fed has plenty of room to raise rates two more times in 2017, in line with the Fed dot projections (shown above) for three rate hikes in 2017 (although those projections were based on the more hawkish 2016 configuration of FOMC members).

SUMMARY: During the new Administration’s “First 100 Days” we will be evaluating market reactions and reporting our strategy going forward. There will be increased volatility across all asset classes due to fundamental shifts in policy that are expected to come quickly. We will be monitoring the markets diligently.