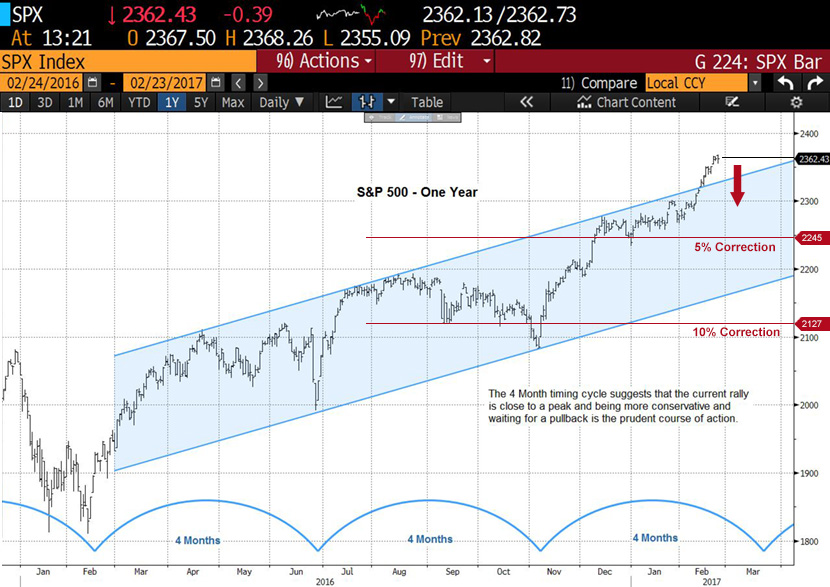 MARKET REACTION: The U.S. stock market indexes continue to set new all-time highs, and with that comes the usual “fear of missing out” being expressed by some investors who are throwing in the towel and buying some of the stocks that have already made substantial moves to the upside. However, that may not be the best strategy, as there are still some areas of the market that have lagged the indexes in performance and may be better places to position for the future. We view the current market as being in a short-term rally within a longer-term uptrend, and we believe there will no doubt be corrections within the long-term bullish cycle, creating more attractive buying opportunities. 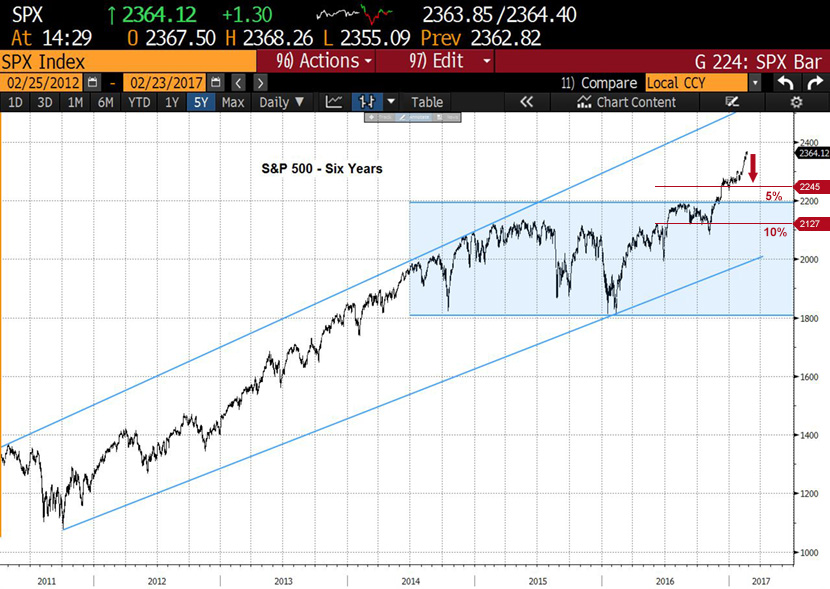 The stock market advance is continuing into further new highs and has become extended enough to expect a snap-back at some point in the near future. It is often the case that stock market trends can see their biggest moves at the beginning and end of a trend, and the current rally appears to be the end run of the uptrend that began in November. The support and pullback potential could be as much as 10% lower for the major indexes, so don’t be surprised if a correction develops. It’s all part of the 8-year longer-term bullish trend that has had many dips along the way. The 4 month timing cycle also suggests that the current rally is close to a peak and we would rather look for a correction to buy rather than chase the current short-term strength.

VOLATILITY: Caution | Higher P/E’s combined with Lower VIX. Our research into rising valuations and falling volatility suggests that the next 5 percent move in stocks will be lower. It is a very small move relative to the overall market performance recently, however the markets need to correct and volatility must increase in order to maintain healthy market balance. The chart below compares the price-to-earnings ratio for the Standard & Poor’s 500 Index with the 30 day average for the Chicago Board Options Exchange Volatility Index, or the VIX. The S&P 500 is close to exceeding 21 times earnings for the first time since 2009, according to data compiled by Bloomberg. 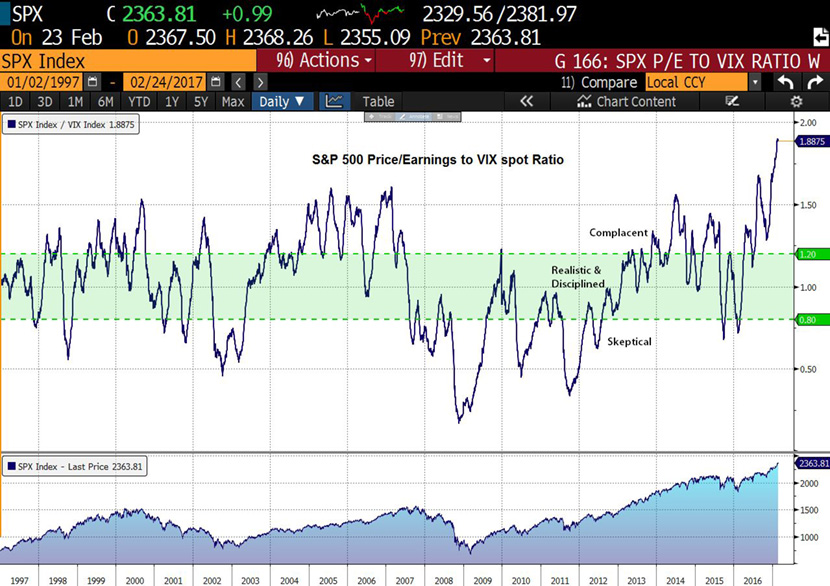 Volatility, as measured by the VIX, is a statistical measure of the dispersion of returns for the S&P 500 index. This index is the standardized barometer for volatility used by most institutional and private investors worldwide. The extreme low level of risk combined with increased complacency increases the probability of a corrective response. 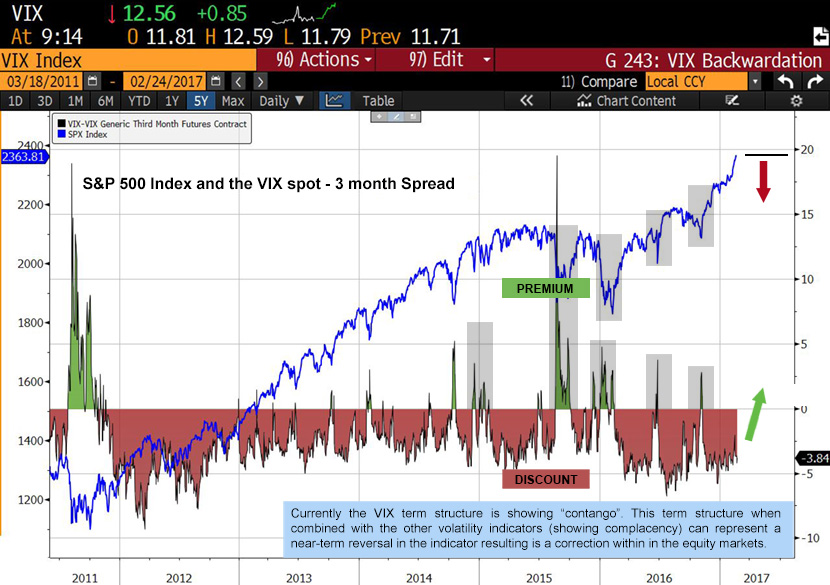 The chart above is the most compelling of the charts shown in the blog. It represents an overlay of the S&P 500 Index and he spread of the VIX spot (current) price minus the VIX 3 month futures price (as represented by the green and red shaded areas on the chart). Currently it shows the VIX term structure known as “contango”. The term structure when combined with the other volatility indicators can represent a near-term reversal (correction) in the equity markets. What’s compelling is when these series of indicators show a discount (shown in red) a short-term reflex sell-off ensued. We believe that, given the data shown above, the probability of a V-shaped reversal of 5% to 10% is probably within the next month. 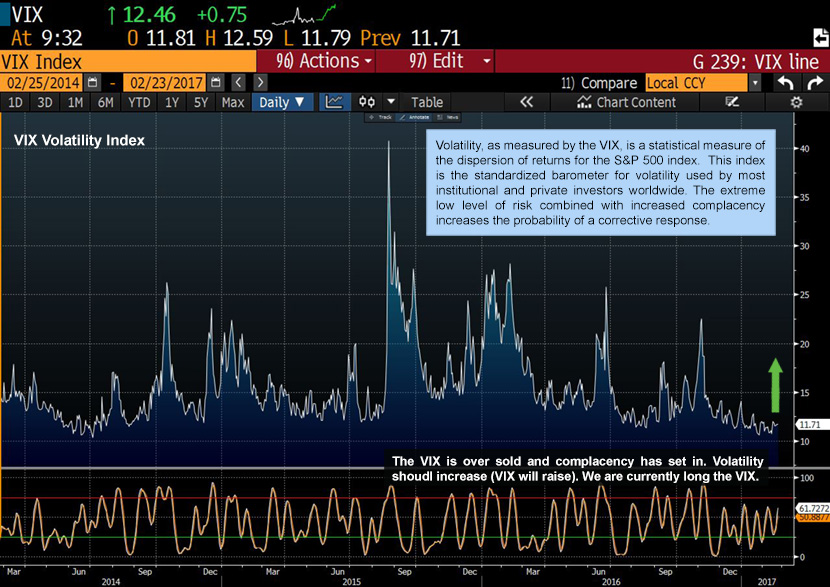 With the recent strong upward action in the equity markets and the fact that the markets are continually making technical new highs, the VIX (volatility Index) dropped to levels that correspond to our writing above. These levels are now showing signs that the market rally could be slowing down and that a possible short-term correction could ensue. We are buying volatility here to protect current positions within the portfolios.

TRADING UPDATE: We have been putting a limited amount of cash to work into stocks as conditions warrant. We have been rebalancing portions of the portfolios while not changing the overall cash weighting in the accounts. The cash can be put to work quickly should we see opportunities present themselves and the potential for hedge positions will remain a trading tool to improve risk exposure in the portfolios. When the corrective period runs its course and/or the markets tell us that they want to move higher based on our research, we will remove the hedge and begin the process of getting back into the markets and get fully invested. Until then we remain diligent in our research and will continually monitor the markets and report back at the quarter end.