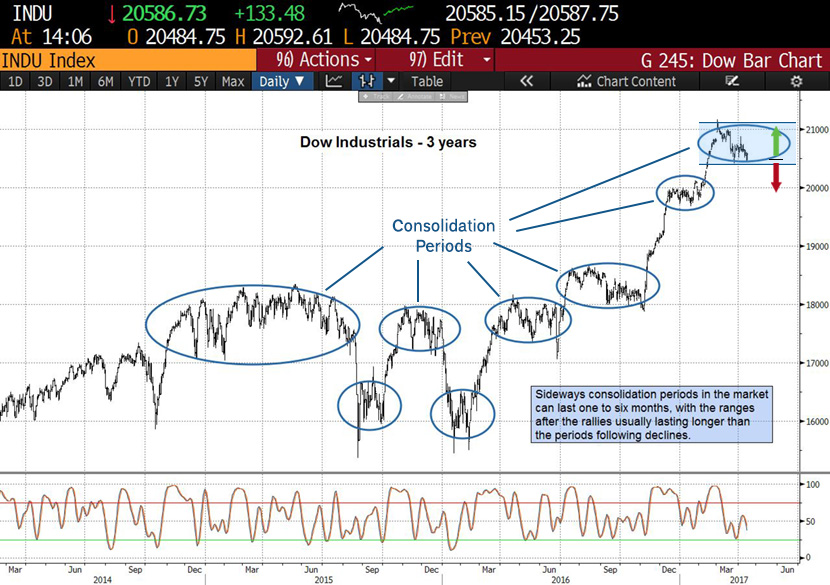 MARKET REACTION: We published a Blog on February 24, 2017 titled “Election Rally Continues | Volatility Decreasing | Complacency Increasing” which outlined our thoughts on the market as the new administration was getting in position to take over. At that time, the U.S. stock market indexes were setting new all-time highs, and with that came the usual “fear of missing out” as investors were throwing in the towel and buying some of the stocks that had already made substantial moves to the upside.

We suggested that this may not be the best strategy, as there were some areas of the market that have lagged the indexes in performance and may be better places to position for the future. We believed the current market (at that time) was within a very short-term rally within a longer-term uptrend, and we believed there will no doubt be mini corrections within the long-term bullish cycle, creating more attractive buying opportunities.

As of now the markets have peaked and are entering a short-term sideways consolidation phase. Many investment markets continue to move along in some consolidating patterns. Whether you’re talking stocks, bonds, or commodities, there are a lot of trading ranges that we think could last another month or two, or even longer. We get used to the markets making bigger moves, and then expect that sort of action to continue, but in fact, investments tend to trade in flat patterns more often than they move in a more meaningful way. We notice that the opinions about a bigger move in the markets also tend to become much less prevalent as a consolidation period wears on, so that by the time a breakout from the range finally arrives, few are expecting it. It is true that “past performance does not guarantee future success,” but it is interesting to see how many people don’t expect the markets to change, when that is what the markets are always doing. 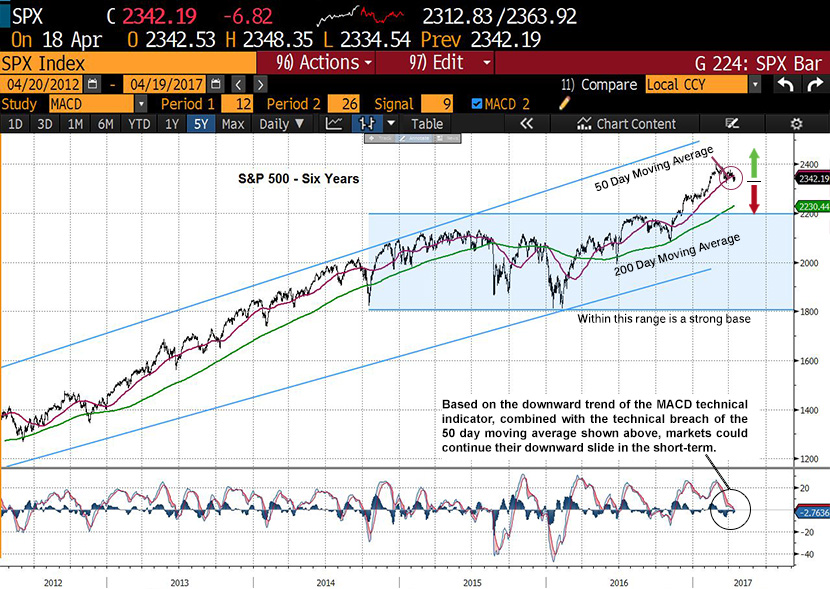 The market appears to be drawing out a consolidation period where it could trade in a range and be mostly neutral for the next several months. Although we hear a lot about why the market should go up or down from here, the fact is that it has had a recent strong move to the upside, and it’s normal and common for a period of rest, called a “consolidation” following a particularly strong period for the averages. We are not convinced that we have seen the low end of a possible range yet, and see the whole process as being about a 10% wide range that lasts six months or so. During this time, we expect most stocks to also trade sideways, but we believe there will be many exceptions in both directions, so attention to those individual positions will likely be more meaningful than the market direction for the next several months. We see the correction risk as being highest in those areas of the market that have reacted the most on the upside since the election.

In a long-term bull market, it is normal for different sectors and styles of investing to outperform for various periods of time that can stretch into years. It is true that most stocks move higher during a bull market and that some of the cycles of over and underperforming sectors can last for months and years, making it important to recognize where in the trend the overall market is and which areas tend to do best during the evolving bull market. In general, a bull market that is early in its development tends to see the large-cap, lower-P/E, and higher-yielding stocks do best. As the bull market continues, the more-favorable sectors tend to shift to the growth areas and more-aggressive small-cap stocks as the economy and investor sentiment improve to more-robust levels. Although there are now many opinions being expressed about the relative age of the current bull market, many of the longer-term indicators are still far below the kinds of levels that suggest an end to the trend. We still see years ahead that could be very rewarding for investors who can tune out the short-term noise and focus on the longer-term trends that are still improving.

VOLATILITY (S&P P/E to VIX SPOT Ratio): Again with respect to our previous Blog mentioned in the beginning, we were cautious with respect to Higher P/E’s combined with Lower VIX. Our research into rising valuations and falling volatility suggested that a correction was coming or at least a pause. It is a very small move relative to the overall market performance recently, however the markets needed to pause or correct and volatility must increase in order to maintain healthy market balance. This is exactly what happened. 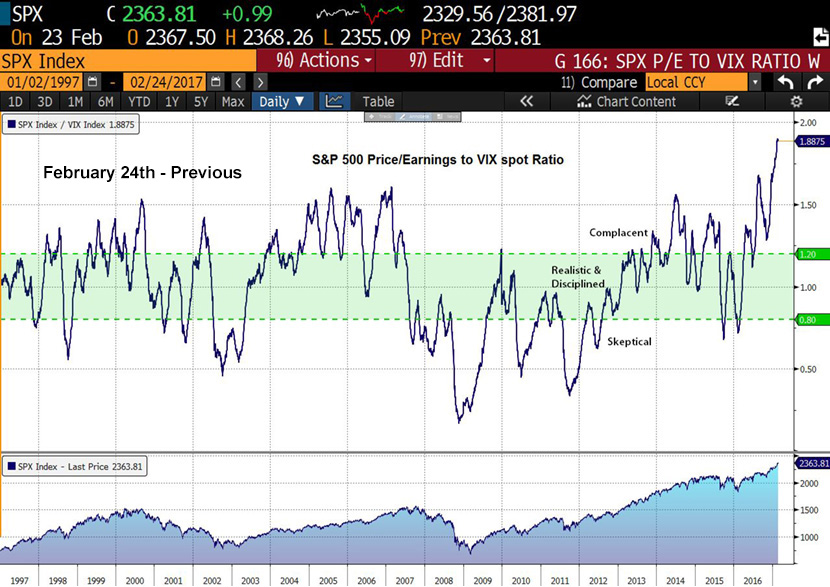 The chart above compares the price-to-earnings ratio for the Standard & Poor’s 500 Index with the 30 day average for the Chicago Board Options Exchange Volatility Index, or the VIX. The S&P 500 was close to exceeding 21 times earnings for the first time since 2009, according to data compiled by Bloomberg.

As you can see in the updated chart below, the markets have paused causing a slight reduction to the ratio. This would suggest that the market was (see Chart above) ahead of itself showing signs of overvaluation. Now that the market has paused and slightly corrected, valuation in stock has dropped making stock more attractive. This balance of people chasing (demand) combined with a short-term pause could be strong enough to lessen any corrective move of 5% or more at this time. 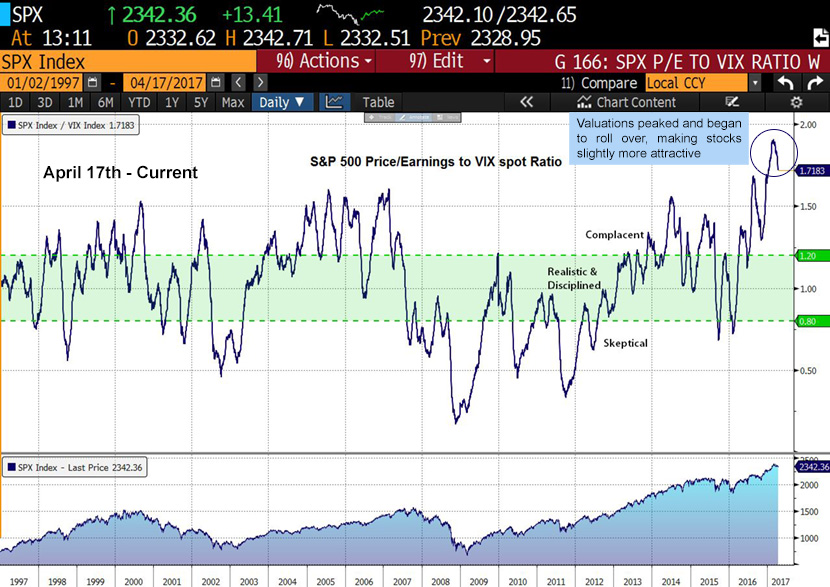 VOLATILITY (VIX): Volatility, as measured by the VIX, is a statistical measure of the dispersion of returns for the S&P 500 index. This index is the standardized barometer for volatility used by most institutional and private investors worldwide. The extreme low level of risk combined with increased complacency was not sustainable and the probability of corrective move increased. Investors began hedging their portfolios causing a rise in the VIX as we suggested.

Previously, the VIX’s close for the 30 days moving average ending February 23, 2017 was 11.71, which would be the lowest for this figure since July of 2014. Dividing the S&P’s P/E by the VIX average produced a ratio of 1.88. At readings greater than 1.2, this gauge points toward complacency among investors. We expected a pause or a corrective move in the market.

Currently, The VIX’s close for the 30 days moving average ending April 17, 2017 is 15.07 resulting in a new ratio of 1.71. Complacency remains high, however with the recent spike in volatility, it is diminishing and moving in the right direction in our opinion. 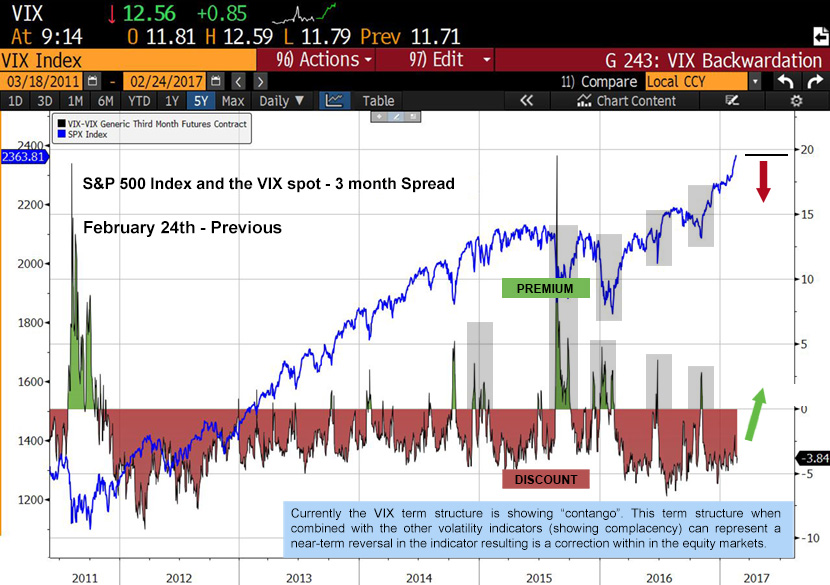 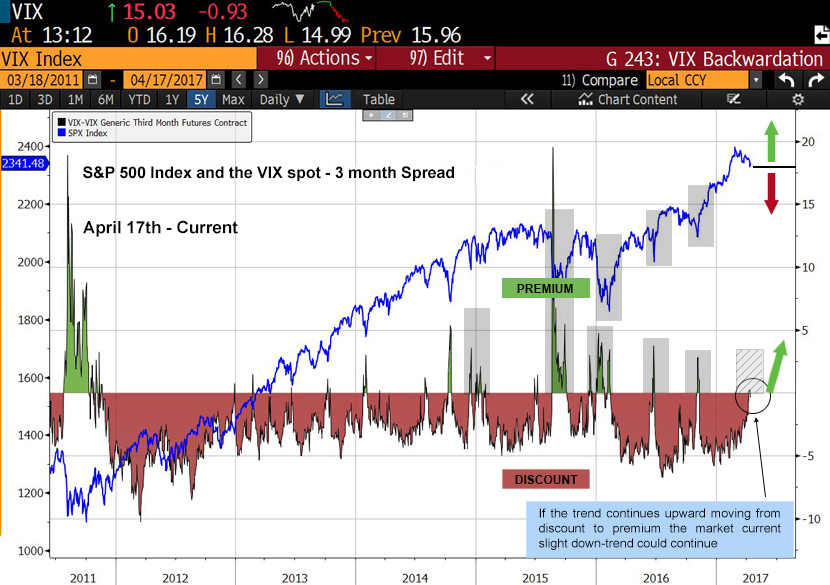 The chart above is the most compelling of the charts shown in this blog. It represents an overlay of the S&P 500 Index and the spread of the VIX spot (current) price minus the VIX 3 month futures price (as represented by the green and red shaded areas on the chart). Previously, it showed the VIX term structure known as “contango”. The term structure when combined with the other volatility indicators can represent a near-term reversal (correction) in the equity markets. What’s compelling is that when these series of indicators show a discount (shown in red), a short-term reflex sell-off ensued. We believed that, given the data shown above, the probability of a V-shaped reversal was possible. What is currently at play is a pause and a slight correction. We will be watching this closely. 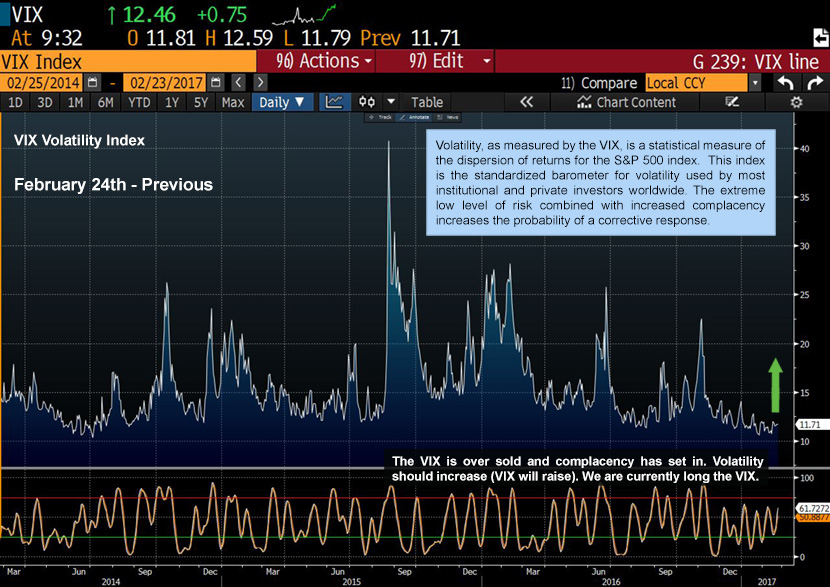 With the previous strong upward action (shown above) in the equity markets and the fact that the markets were continually making technical new highs, the VIX (volatility Index) dropped to levels that correspond to our previous writing. These levels were showing signs that the market rally could would be slowing down and that a possible short-term correction could ensue. We were buying volatility here to protect current positions within the portfolios and the positioning worked.

Currently, the VIX (as shown in the chart below) has increased dramatically, corresponding to the pause and slight pullback in the markets. The VIX increase has slowed. We will be looking for a possible new market upward move or a resumption of the increase in the VIX which would correspond to further downside pressure in the markets. 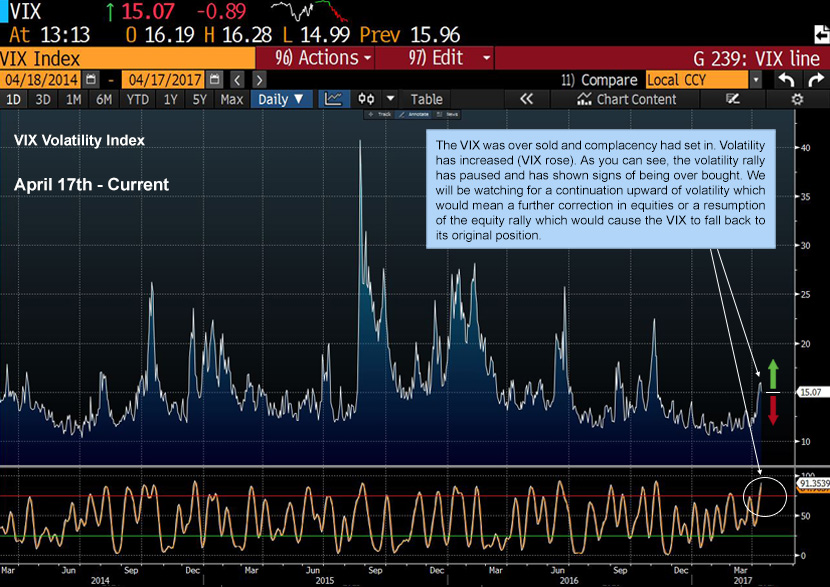 SHORT-TERM (Days to Weeks): Toppy. We believe that the stock market indexes are in a cyclical bull market within a long-term secular bull market, but are extended and have correction risk for the short term. We believe there are many indications that the strong uptrend of the past year is losing some of its momentum, and with the S&P off about 3% from its peak, we see the risk for another 5%–10% of possible risk in the weeks ahead. Most stocks and groups may have similar risk to the averages, however those areas that have above-average risk could be the ones that have made the biggest moves to the upside since November, and also those that are already in clearly declining trends. But otherwise, this appears to us to be a good time to hold and focus on yield and watch for better buying opportunities after some stocks pull back.

LONG-TERM (Months to Years): Bullish. The Dow Industrials and the S&P have been in bull markets since 2009, and they continue to trade in rising channels that imply further gains over possibly many more years. We continue to believe the U.S. stock market is about a third of the way into a longer-term secular bull market that we expect to rise until the sentiment of investors and the public becomes much more optimistic about the future, which could still take many more years to develop. The theme of this bull market has been that of changing group rotation where different market sectors and groups do better or worse at various times, and we suspect this kind of cyclical rotation between stock groups will likely continue as the bull market evolves. It is usually not until much later in the long-term cycle when the market gets to a position where most groups and stocks are in bullish trends, so we believe a long-term holder of a diversified portfolio can expect to see this varied performance between different stock groups continue for several more years.