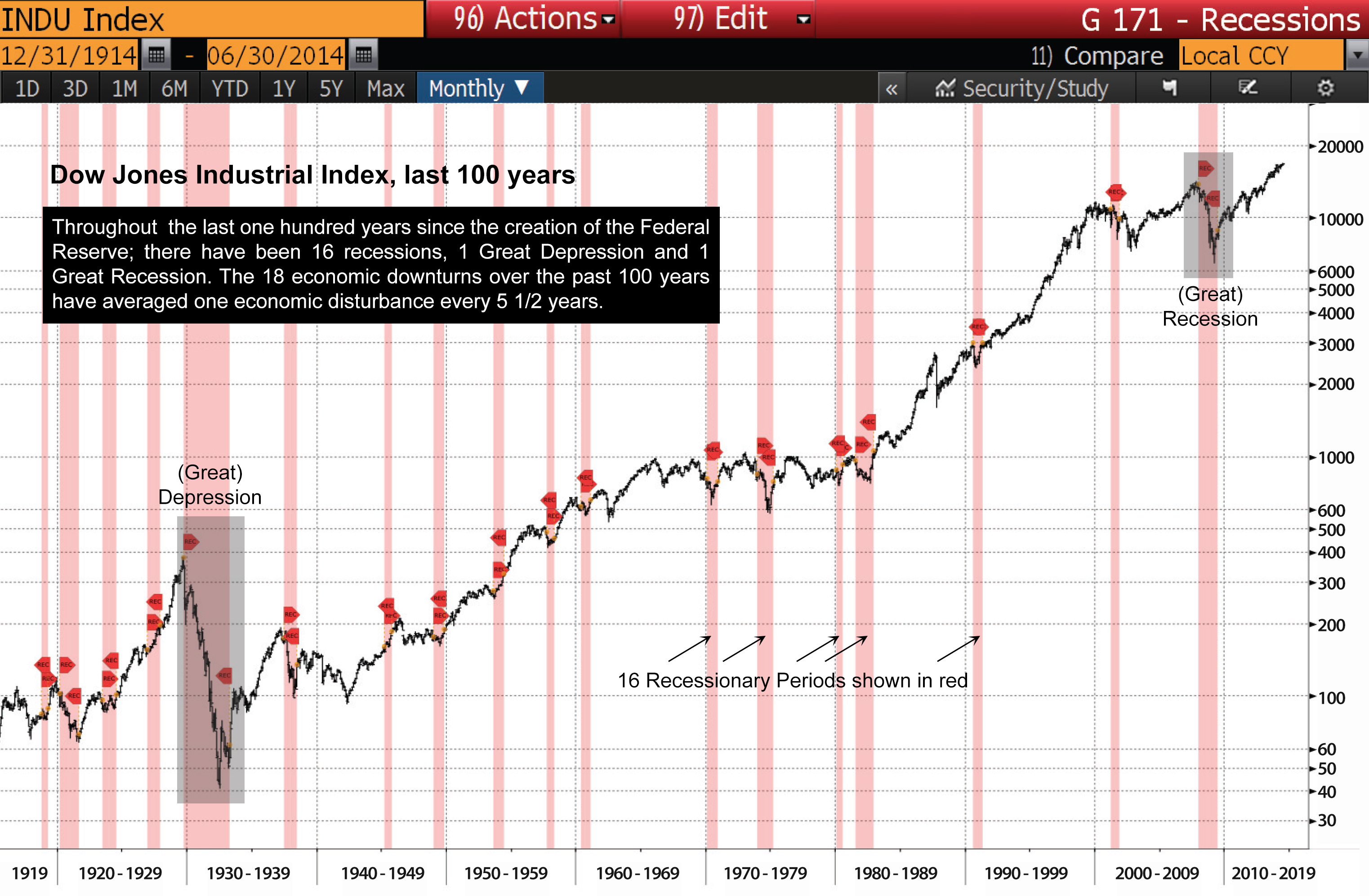 A glimpse into the past
Beginning with the Panic of 1907, perhaps the first financially engineered crisis by the New York City bankers, has led to where we are today with central bankers controlling the world’s major economies. It has taken one hundred years from the creation of the Federal Reserve Bank in 1913, inclusive of several important incremental concessions of power, to get to where the central bank has complete dictatorial powers of the U.S. economy absent of Congressional oversight and outside of the U.S. Constitution. Throughout these last one hundred years, the Federal Reserve Bank has managed to reduce the purchasing power of the dollar by 96%, confiscate America’s wealth and transfer the power to an elite power base that has enabled chaos to ensue in the financial markets and perpetuate the war machine to cripple the U.S. taxpayer with insurmountable debt.

Throughout the last one hundred years since the creation of the Federal Reserve; there have been 16 recessions, 1 Great Depression and 1 Great Recession. The 18 economic downturns over the past 100 years have averaged one economic disturbance every 5 ½ years despite the fact that the Federal Reserve was created and sold to the American public with the concept of engineering stability. The facts and history however prove otherwise. As Edmund Burke stated over two hundred years ago, “For those who don’t know history are destined to repeat it”. The bursting of the asset and debt bubble, artificially inflated by actions of central bankers, will be of no surprise for those with knowledge of history.

Today the Federal Reserve, through their massive manipulation of interest rates and reckless money printing in the form of various stimulus packages has created an enormous asset bubble most notably in bond and equity prices. The Federal Reserve and other world central bankers have artificially reduced interest rates to levitate asset prices in an effort to bail out their member bankers; all in the name of saving the financial system. The irony of course is that the saviors are indeed the culprits that created the need for government interference with the free markets; a cycle that has been repeated continuously but perhaps coming to a dangerous conclusion.

The Goals of Quantitative Easing (QE):

The goals of Quantitative Easing, from the perspective of a central planner, are to repair economic conditions by making the financial system more solvent. Slashing of interest rates to near zero has repaired the toxic assets held by banks. However, this has failed to promote sustainable economic recovery simply because the banks have not reciprocated by lending their assets (new loans). To be certain, this monetary phenomenon is experimental and there are no known successful exit strategies.

To carry out QE, central banks create money by buying securities, such as government bonds or mortgage backed securities (MBS’s) from banks with electronic cash created with a mere “push of a button”. This money printing, or new money, swells the size of the bank reserves in the economy by the quantity of the assets purchased, hence “quantitative easing”. The effect, similar to ZIRP (Zero Interest Rate Policy), is expected to stimulate the economy by encouraging banks to make more loans to qualified creditors.

The theory extends that the banks will take the freshly printed electronic money and buy assets (loan creation) to replace the ones that they have sold to the central bank. The fear of central planners (Federal Reserve and other central banks) is that deflation spirals uncontrollably turning into an economic tantrum with low (or negative) productivity, high unemployment and decreasing asset prices thus threatening existing loans (assets) of member banks.

The deflation cycle is a vicious cycle in the mind of monetarists which can implode a financial system and should be averted at all costs. The significantly unknown variable in the present monetary experiment is what the costs are and when the piper will need to be repaid.

The concerns of QE are numerous but most center around the facts that the flood of cash has encouraged reckless financial behavior and has directed a torrent of money to emerging economies that are incapable of managing the cash. Two profoundly polarized views also prevail as to the expected outcome of QE, they are:

The effects of Quantitative Easing (QE):

There are many significant effects of QE. To be fair, some have produced the desired objectives of the central planners. To be critical, they have encouraged reckless behavior and will result in undesired consequences. Manipulation, and by extension any government intervention of free markets, will always result in corrective adjustments with oftentimes the pendulum swinging wildly and much further in the opposite direction to compensate for the malfeasance so induced.

Some of the most significant desired effects of QE have been: 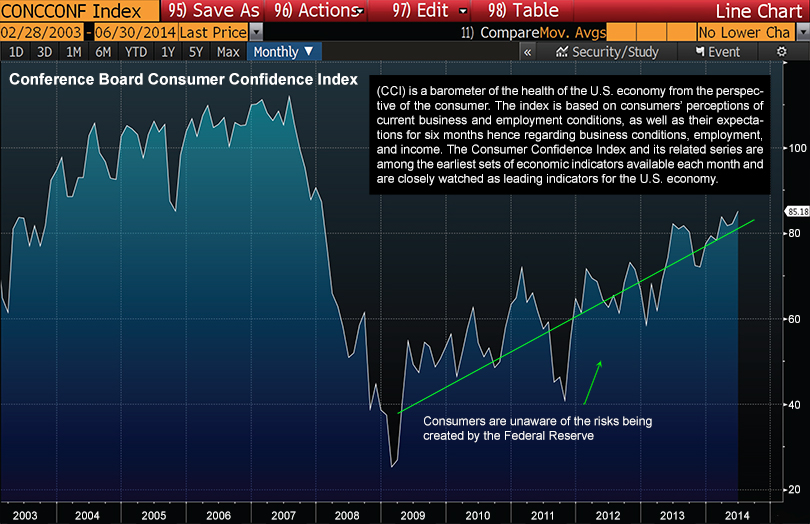 Some of the most undesired or unintended effects are:

Unwinding QE and the reduction of the Fed’s balance sheet:

As mentioned earlier, there are two dramatic and diametrically opposing views on what the likely outcomes of the Fed and other central bankers will be by removing the printing presses and monetary stimuli of quantitative easing. One thing remains certain throughout the history of monetarism; it’s never before been attempted because it’s never before been done on such a scale, both domestically and internationally.

The Fed maintains it has the tools to systematically unwind their massive asset accumulations; perhaps they do but there are nearly always unintended consequences of even the most benign reversals of historic magnitudes of government manipulation. As the pendulum swings from risk-on to normalization, risk-off may occur from several independent or concurrent factors. They are:

Finally, since the Federal Reserve was introduced in the dark of the night just days before Christmas in a secluded hideaway on Georgia’s Jekyll Island, this is the first time that no one at the Fed, no one at the Treasury or no one on the President’s Economic Advisory team has had any market experience. They are all academics working in a theoretical laboratory conducting a radical experiment with a hypothesis untested in the real world. What could possibly go wrong?

Where are we now? 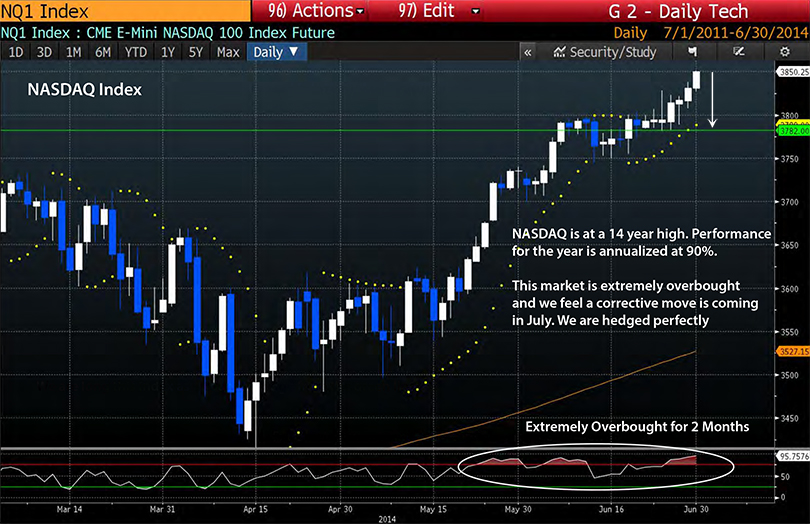 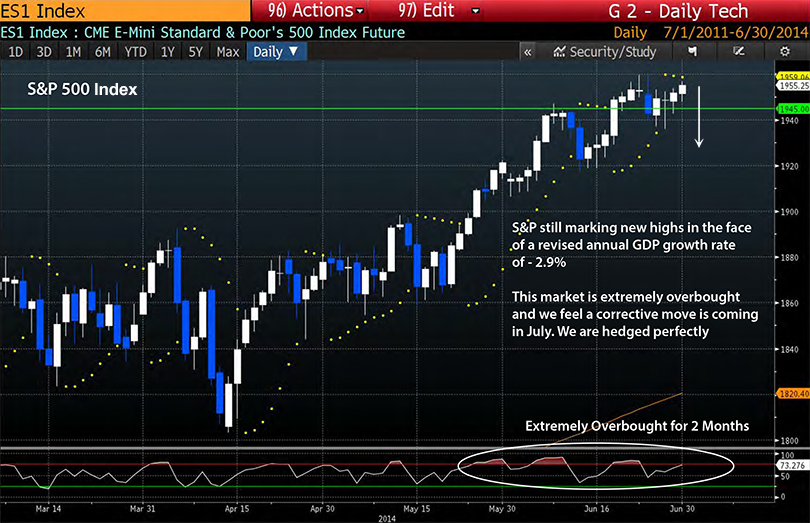 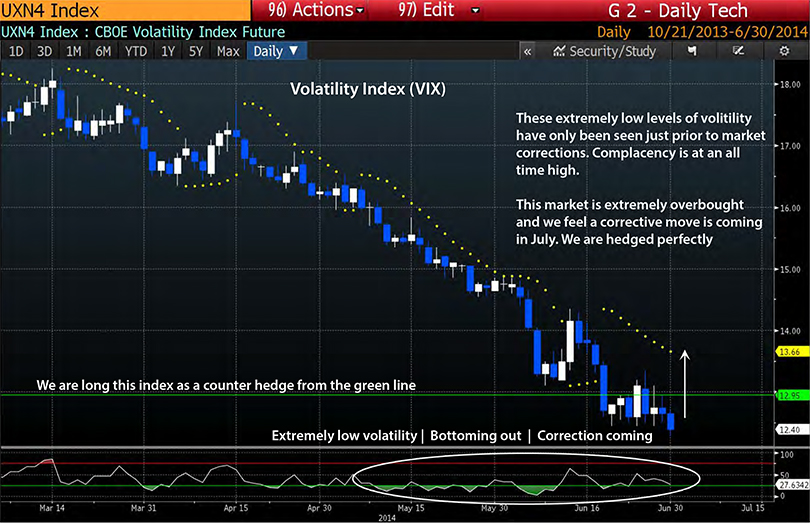 To the applause of many, to the chagrin of few we are:

All of the above risk factors are concurrent to substantial domestic and geopolitical risks that in ordinary times would suppress even the most enthusiastic risk arbitragers. Some of these potential concerns and thus reasons for investors to remain cautious are:

With all the stated risks the markets are at all-time highs; enthusiasm and optimism as measured by market participants are brushing euphoric levels; complacency to benign market conditions has trumped any fear that changes may even occur; and the chasing of yield has migrated even the most risk adverse investor into handsomely absorbing more risk with the absence of planning that outcomes may not go as perceived. What could go wrong? To the hopes and plans of many, maybe nothing will go wrong but we do not agree.

There are some positives

With everything said above and as a counter argument, there exist some very favorable conditions to support an ongoing (albeit slow) economic recovery once rates normalize and destructive financial leverage is effectively parsed out of the system. The markets do have a foundation in place to foster sustainable, if not dramatic, growth into the future. There are, however, structural improvements that need to be met in an effort to perpetuate the goal of meaningful and sustainable economic conditions.

Currently, corporate America has never been in better financial condition with respect to their balance sheets. New technology with the capability of transforming our culture and our economy is in place, a new focus on the optimization of energy is being discussed, innovative medical devices and procedures as well as technological breakthroughs in the fields of electronics, science and manufacturing await the deployment of capital and proper market-based financing. The private sector has never been stacked with more potential, yet arguably has never been more stifled with bureaucratic obstruction.

There currently exists several trillion dollars in European banks trapped from repatriation to the U.S. simply due to avoidance of punitive taxation. Corporate governance compels the status quo; keeping profits on international operations outside of the U.S. thus keeping innovation and jobs offshore.

We as a country and an economy desperately need new and high paying jobs, financially sound social protections for the indigent and aging demographic and a new focus on competitive vibrancy of our youth, perhaps our most important asset. We also need to release the stacked potential energy and tackle government interference and waste that is prevalent in the political and financial arenas. With all of this said, if real jobs begin to be created then real economic growth can be sustained and markets will rise in a more normalized manner.

Extremely low volatility and overbought conditions have returned to the financial markets. As such, we have begun to step up the level of trading (positioning) and risk (position size) proportionate to our confidence that our trading models will respond properly. We have a large trade (short position) on the market and are monitoring it full time. We are currently net short with several positions. The markets are moving in both directions, however they exhibit an unrealistic upward bias and we feel confident in our position as the markets normalize. With the markets fluctuating hourly, we have been trading around the core net short position and repositioning for a reversal that is long overdue.

The market’s overbought condition and investor complacency is significant as we enter the middle of the summer months especially after the frequently forecasted seasonal event “sell-in-May-and-go-away” did not come to fruition. We feel the correction has been delayed and that the summer months could still see a corrective period through late August when equities typically find a bottom, consolidate and prepare for a move higher in the fall months. With all of the historical research we follow combined with the headwinds that the markets are still facing (Fed tapering, reduced growth forecasts and potential geopolitical events), we have repositioned our portfolios to protect and prepare for a corrective move.

When the seasonal period runs its course and/or the markets tell us that they want to move higher based on our research, we will remove the hedge and begin the process of getting back into the markets and get fully invested. Until then we remain diligent in our research and will continually monitor the markets and report back as data become available.