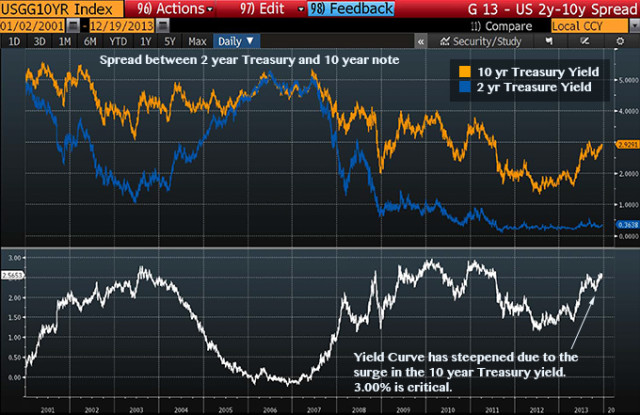 The yield curve is near the steepest level in 2 1/3 years due to improved U.S. economy and expectations for QE3 tapering. As represented by the 10 year treasury yield minus the 2 year treasury yield, the yield curve reached a 2 1/3 year high of 257 basis points last Thursday and then backed off slightly to 256 basis points today. The 2 year yield is currently locked near its current level at 0.30% by the fact that the Fed will likely keep the federal funds rate pegged near zero for at least another year. That means that most of the recent fluctuation in the 10yr/2yr yield spread has been due to the surge in the 10-year yield from as low as 1.70% in May to the current level of 2.88%.

The Fed began its winding down of bond purchasing, commonly known as Quantitative Easing (QE) with a small, yet important, “taper” of their monthly purchase commitments. Their reduction of bond purchases beginning in January 2014 are a total of $10B per month evenly split between long dated treasuries and mortgage backed securities. What’s more significant regarding the QE reduction is the plan to systematically reduce the purchases throughout the course of the next year or so. The Fed conveniently provided themselves the flexibility to either increase or decrease the amount of purchase reductions with their patented “data dependent” language. However, the effect of reeling in the massive QE program, the Fed made it crystal clear that they are distinguishing this maneuver from “tightening” by way of the more traditional increases in the Fed Funds rate. In fact Bernanke went out of his way in the post FOMC rate announcement press conference to emphatically state that the Fed Funds rate will stay zero bound through 2015 regardless of how unemployment or inflation statistics meet or exceed their previously stated objectives (6.5% and 2% respectively).

This long awaited tapering may pave the way for further steepening of the yield curve, primarily the effect on the two vs. ten year treasury curve (see chart above). As mentioned in a previous Market Update, this yield curve steepening may have a positive effect upon Main Street business throughout America. The reason is somewhat counterintuitive. The large amount of QE released by central bankers has not circulated to the general economy for several reasons:

With the further potential of yield curve steepening allowing banks greater risk premia to lend to Main Street and the combination of the Fed signaling an eventual end to the “free” money spread to banks (as discussed in #2 above), the banks will be encouraged to seek bonafide creditors seeking to expand their businesses with additional financing. This process, although slow at first, gathers momentum as bankers will compete amongst themselves to gather new business through lending. As money begins to circulate, money velocity will increase, the economy may gather steam, and inflation, as measured by the government, will start to climb. The next challenge for the Fed, and theeconomy at large, will be containing the momentum of inflation as this process is dependent on an equilibrium of new money available in circulation (borrowed funds) and the turnover rate (money velocity) versus the elasticity of demand. If the demand keeps up with the rate of change of the increase in circulated money, then GDP will smartly rise and inflation will only creep forward. However, if the demand falls short of the increased rate of change of new money (i.e., more money chasing the same or fewer goods), then we could see rapidly increasing inflation and radically deteriorating bond prices (swiftly higher yields). The former elastic increase in demand proportionate to the increase in money velocity is overwhelmingly bullish for the economy and stock markets.

With the Fed’s manipulating of interest rates (keeping them artificially low) they are forcing investors to search for greater yields and rate of return. The byproduct is higher stock prices (chasing rate of return), higher consumer sentiment, greater spending by both individuals and corporations and the economic growth cycles begins. The problem is this has taken six years and a three and a half trillion dollar increase in the Fed’s balance sheet to get us to this point.

Now that the Fed has provided some direction regarding the unwinding of QE, we are developing our strategies going forward and we will elaborate on this in future Market Updates.