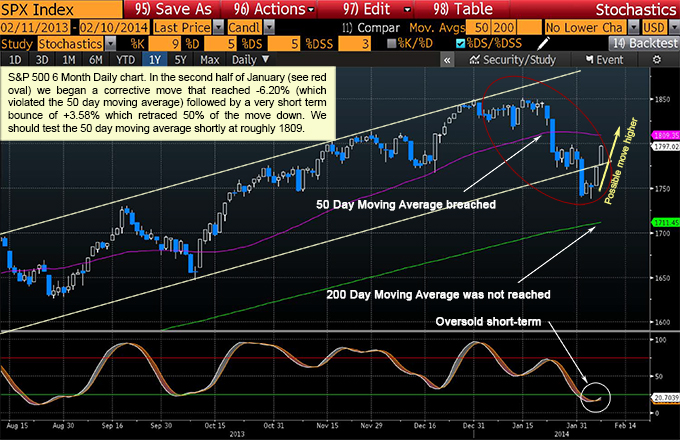 S&P 500 Corrective Move in Place
The graphs above represent an intermediate-term S&P 500 (1 Year) Daily and a short-term S&P 500 (6 Month) Daily chart. Over the last year, the markets have been rallying and maintaining a very tight trading range without a -10% corrective move. This has concerned us and we have been in a defensive posture for the last few months with 25% cash and at times a protective hedge of up to 12%. In the second half of January (see red oval) we began a corrective move from a high of 1850.84 that reached a low of 1737.92 representing a -6.10%. This move violated the 50 day moving average, followed by a very short term bounce of +3.40% which retraced 50% of the move down. Near the low of the move we removed our hedge positions but maintained our cash weighting. In new portfolios or new accounts with 100% cash we have put 20% to work on the buy side. We should test the 50 day moving average shortly at roughly 1809. The markets are approaching a critical level here and there are now valid arguments for both sides of the market, up or down. We can make the case for both however we will rely on more data to determine which direction we are going within our portfolios in the short run. We would still like to see further corrections of -10% (1665.75) or -15% (1573.21) reached before we resume the 4 year rally. This would also correspond with our work related to the markets entering a new 16 to 18 year secular bull phase.

The FED has tapered twice recently while Janet Yellen takes the lead position this week at the FED and will speak to Congress for the first time. A new FED Chair is usually met with increased market volatility and pressure to the down side due to the uncertainty that a new FED chair brings to the position. They have not been tested nor battle scarred so the markets perceive this uncertainty as having a negative bias. Over the past month, deteriorating market internals (technical indicators) have not only weakened, but are now weakening further. This is another reason for the cautious stance we have been taking within the portfolios as we maintain a higher level of cash. The recent combination of new market highs being unconfirmed by the market breadth indicators, referenced in our prior post, coupled with the rotation into defensive sectors suggested that the S&P was in the latter stages of its advance. We continue to remain cautious through this inflection point and maintain our 25% cash weighting.

In the near future, two scenarios could play out. One, the recent rally off the -6.10% corrective move will fail and we will put an aggressive 12% double down short position back on the portfolios or two, the markets will rally through the 50 day moving average and we will once again test highs causing us to reduce cash to 5% and chase the rally to the upside. With that said we f eel the first scenario will more likely play out.