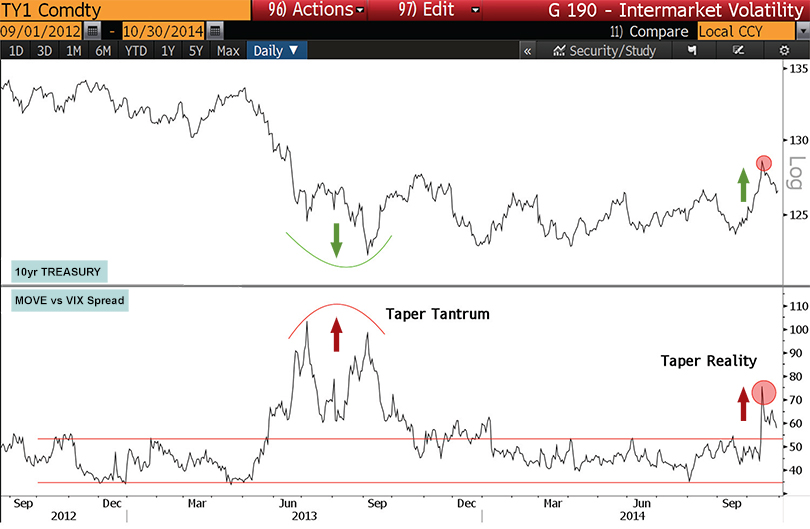 The equity and bond markets are constantly competing for investor funds. The risk-off price action of early-October saw funds flow from equities into bonds, causing volatility to rise, as investors sought safety and liquidity as seasonality, negative news related to Ebola and an increased perception that the markets were due for a correction gained momentum.

The Chicago Board Options Exchange Volatility Index, or VIX, spiked as equities declined sharply. The Merrill Option Volatility Estimate, or MOVE, also showed a spike in price movements in U.S. Treasury futures. Since the announcement of Quantitative Easing (QE3) in September 2012, the MOVE outpaced the VIX to the upside when the market began to price in the possibility of a rate increase. This is referred to as the “Taper Tantrum” as indicated in the graph above.

At least in the short-term, QE has not produced inflation as inflation expectations and yields have actually declined. The question that remains is whether or not a spike in the MOVE-VIX spread signals a price extreme for Treasuries on the upside as it did on the downside. We feel it has and are expecting rates throughout the Treasury Curve to begin to rise. It may be gradual at first but we feel the lows in yields are in.