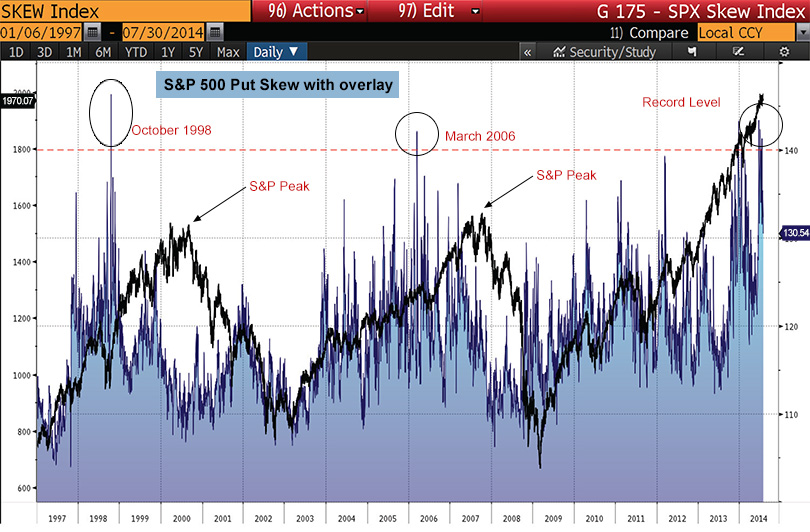 S&P 500 Put Skew approaching Record Highs | Complacency
S&P 500 options are becoming more costly as investors are paying up for protection against a drop in U.S. stocks as they never have before, judging by the performance of an option-based indicator. The chart above displays the Chicago Board Options Exchange’s SKEW Index (along with the S&P 500) calculated from the cost of bearish put options on the Standard & Poor’s 500 Index relative to bullish call contracts. The SKEW is typically between 100 and 150, and higher numbers show a greater perceived risk of a market drop.

In the past four weeks, the SKEW has exceeded 140 three times: on June 20, July 2, July 3 and July 18. Only four other earlier readings, in June 1990, October 1998, March 2006 and December 2013, surpassed this threshold since calculations started in 1990. The chart shows all but the earliest occurrence, which happened four weeks before the S&P 500 peaked.

The SKEW is giving the markets a warning signal as larger (institutional) investors are quietly and eagerly buying up put protection. They are also holding stocks but firms are starting to promote a possible asset shift coming and are telling clients to reduce equity holding and move to a neutral position. The latest readings coincide with a historically high degree of optimism by investment advisers, as recorded in a weekly survey by Investors Intelligence. Bulls accounted for more than 60 percent of participants in five of the last six weeks. Many analysts view the survey’s results as a contrary indicator, reflecting the potential for a change in direction. The market’s overbought condition and investor complacency is significant as we head into the mid-summer months especially after the frequently forecasted seasonal event “sell-in-May-and-go-away” did not come to fruition. We feel the correction has been delayed and that the summer months could still see a corrective period through late August when equities typically find a bottom, consolidate and prepare for a move higher in the fall months. With all of the historical research we follow combined with the headwinds that the markets are still facing (Fed tapering, reduced growth forecasts and potential geopolitical events), we are repositioning our portfolios to protect and prepare for a corrective move.