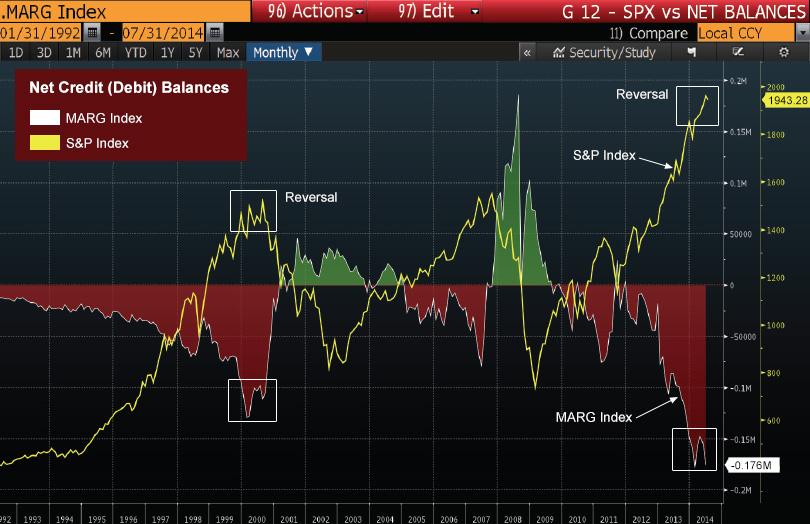 There are many indicators lining up and giving validity that a correction is warranted and may be near. Record high Net Leverage in New York Stock Exchange broker accounts indicates investors have become overextended and may soon lack further buying power to drive U.S. stocks higher. The chart above shows the total net credit (debit) balances that investors have in their accounts, calculated by adding credit balances in NYSE cash and margin accounts and subtracting debit (loan) balances. Margin accounts are mostly used by hedge funds and large speculators that leverage their bets by investing borrowed money. You can see the result of the huge buying power in 2008, the highest since the data was first tracked in 1992, with the equity market’s turnaround beginning in early 2009.

Conversely in 2014, NYSE broker accounts and, in particular, hedge funds are as leveraged as they have ever been and it continues to swell at an alarming rate. The significant amount of leverage is a contrarian (bearish) indicator for U.S. stocks. This record leverage could prove to be a very powerful source of selling should any hiccup occur in this rally as margin calls could accelerate equity selling significantly. In the past, you can see that extreme levels in the net account balances (indicated by the white line with the directional shading) have preceded market reversals. The graph is confirming that when a reversal occurs, both in excessive margin reduction and a corresponding market correction, that the event will have an accelerative component to it and be larger than the general public is estimating.

The market’s overbought condition and investor complacency is significant as we head into the mid-summer months especially after the frequently forecasted seasonal event “sell-in-May-and-go-away” did not come to fruition. We feel the correction has been delayed and that the summer months could still see a corrective period through late August when equities typically find a bottom, consolidate and prepare for a move higher in the fall months. With all of the historical research we follow combined with the headwinds that the markets are still facing (Fed tapering, reduced growth forecasts and potential geopolitical events), we are repositioning our portfolios to protect and prepare for a corrective move.

Over the last month we initiated (in stages) a hedge on the S&P, Nasdaq and Dow indices which gives us a 25% protective hedge on the portfolios. Along with the hedge, we will carry cash weightings in the portfolios between 10% and 15%. When the seasonal period runs its course and/or the markets tell us that they want to move higher based on our research, we will remove the hedge and begin the process of getting back into the markets and get fully invested. Until then we remain diligent in our research and will continually monitor the markets and report back at the quarter end.