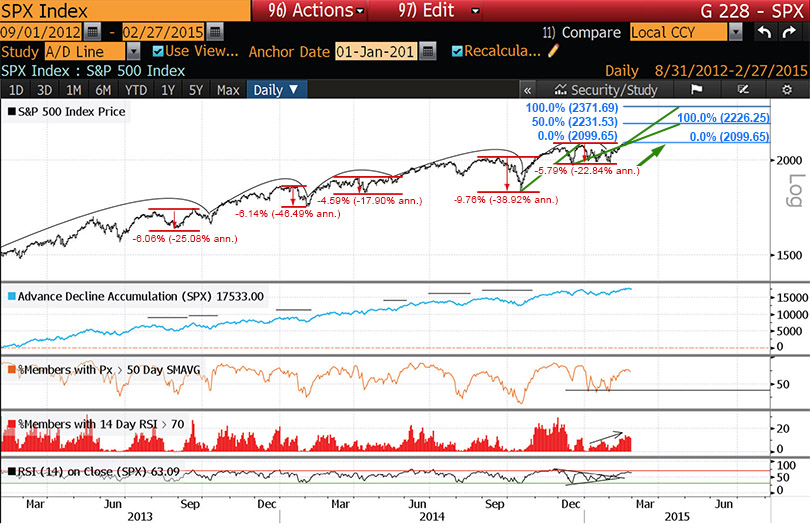 U.S. equity markets reached an all-time high on February 24. If recent patterns persist, the market is due for another rally. The corrections of February 2014 and October 2014 have been aggressive tests, but not failures, of intermediate-term support. A simple way of defining an up-trend is a trend with higher highs and lows and a trend that holds intermediate term support levels during corrections.

When price follows this pattern, as the S&P 500 has since the October 2011 low, it is a trend follower’s market. Trends by definition persist until the opposite of the aforementioned conditions occur. In this chart, we see up trends have been followed by consolidations, many of which lasted about 50-60 days until the trend resumed higher. In other words, if this trend continues it is about time for a rally.

Since this up trend is intact, we can use Fibonacci extension as a guide to upside moves. The 50% and 100% of two prior swing levels align at about 2,225 or 5% higher from current levels. Further measurements suggest 2,370 may be achievable this year. Most stocks in the index have participated in rallies. The advanced/ declined line made new highs either with or before the price trend. The percentage of stocks in the index above the 50-day moving average and the percentage of stocks in the index whose 14-day RSI is greater than 70 both have a positive slope, confirming the trend. The RSI of the underlying S&P 500 trend had consolidated just like price. It is now advancing to the upside reaching its highest level this year. More importantly, no bearish divergence is present.

In the short-term, payroll growth estimates missing the mark by almost two-hundred thousand jobs over December and January, focus will be firmly on this Friday’s announcement of February’s jobs report. Another significant miss, especially with no upward revision in the prior months, could put a huge dampening effect on the pace of the Fed’s taper plans in coming months. With the bull market’s five-year anniversary less than a week away, the big question confronting investors is how much longer the bull market will continue. For clues, we can look at a variety of measures, including fund-flow data and valuations. Inflows picked up last year, but they still have a long way to make up for all of the cash that poured out of the market from 2008 through 2012. This alone suggests the S&P 500 could keep rallying in the years ahead although this is likely to come with volatility including a possible recession and bear market along the way.

Remember, geopolitical tensions may override generally bullish fundamentals. This may contribute to increased headline volatility that is difficult (if not impossible) to anticipate as to when it may occur with either fundamental or technical analysis.  In the interim, until things settle in the Ukraine, we are keeping our trading to intraday strategies and not open any new positions, long or short.

TRADING UPDATE: We are now starting to reduce our cash weighting and buy equities within sectors that we feel will respond well during this upside momentum. This market is being forced higher and we will move in unison with the rally. However, we remain cautious and will look for anything that could derail the current trend.