Market Strategy: Entering a new 16 to 18 year Secular Bull Market.
This report reflects our long-term secular and short-term cyclical market cycle strategy. For the past five years we have been forecasting the end of a (16 to 18 year) secular bear market cycle which historically is followed by a (16 to 18 year) secular bull cycle. Within these long-term secular cycles there are short-term cyclical bull and bear cycles which develop and play out. The financial markets move in cycles and now is a great time to plan for the next few years.

The following information contains our macro view of the patterns that have and are continuing to develop which support the tactical positioning of our overall portfolios to take advantage of these cyclical changes. We believe it is vital that our clients understand and share in this long-term cyclical strategy. Investment success is only achieved through a disciplined investment strategy, patience, and respect for the power of the markets.

For over 100 years the stock market has seen extended periods of sideways patterns followed by long-term outperformance. In essence, it has been climbing a staircase. The market has already taken its next step up and a new secular bull phase appears that it may be confirming. These cycles repeat themselves and we believe we have now broken out of the secular bear market that has been in place for the last 16 years. In the next few years the markets have the potential to confirm the shift into a secular bull phase that could last for multiple years.

The terms “bull market” and “bear market” are synonymous with the stock market. The term “bull market” meaning up or an advancing market and the term “bear market” meaning down or declining market. These terms have now become part of the investment ethos as investors tend to think in terms of bull and bear markets. But this terminology does not properly portray what has transpired over the past century. When viewed through a long-term lens, there have been bull markets (long-term secular uptrends) and bear markets (long-term secular sideways or down markets) in which the market fluctuates within a wide trading range, however from beginning to end makes no real progress.

The last 16 years have been sideways at best. 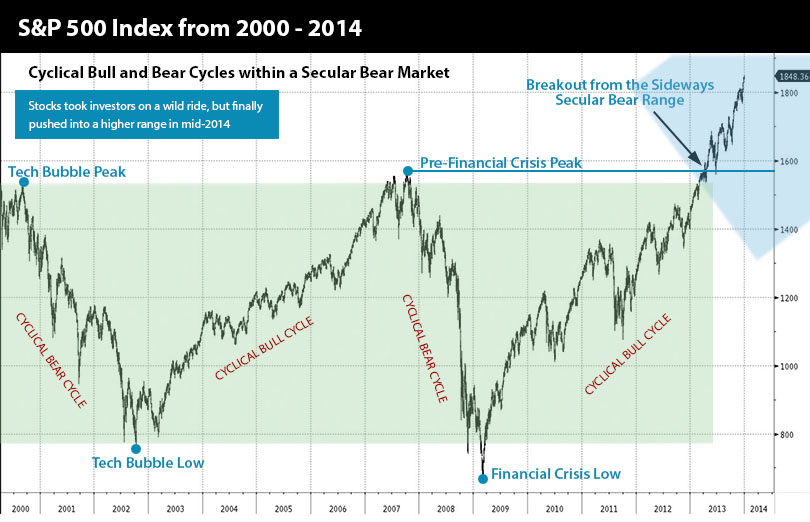 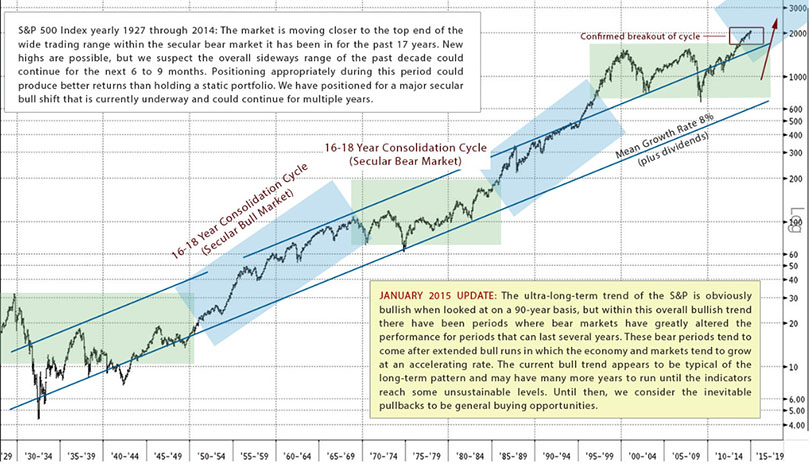 Here the cyclical cycle has given way to something quite different. Instead, one sees long sideways patterns with significant ebbs and flows within them — the Great Depression / World War II era, the high inflation / economic stagnation of the 1970s, and the unwinding of the tech bubble, and debt excesses of the past decade. When those sideways patterns are finally and definitively left behind, they give way to long term advances (secular bull markets) until once again the market enters another period of consolidation and whatever excesses that were built up in the prior bull are wrung out. The market over a long period of time looks more like a staircase, and we believe the market may have begun to take its next step.

The Backdrop of a Bull Market has the following Characteristics.

One of the pushbacks against the secular bull call is that stocks this time around did not approach the single-digit valuation levels that were hallmarks of the predecessor secular bulls. While this is indeed true—the S&P 500 bottomed at between 11x and 12x forward earnings—we believe this overlooks an important distinction that sets the current cycle apart.

Balance Sheet Cash Adjustments: One of the lasting effects of the financial crisis has been the build-up of cash on the balance sheets of U.S. corporations (see chart below). While not all of this cash is readily accessible as it resides in overseas subsidiaries and some is the result of new regulations that require banks to hold more capital. Compared to historical norms, cash today is at extremely high levels. While this potentially provides avenues for future growth (as well as higher dividends and share buybacks), it is currently earning very little as interest rates are near zero.

This is making the S&P 500 look more expensive on a P/E basis than is actually the case. If we adjust the P/E multiple of the market to reflect this cash and compare it to “cash-adjusted” P/E’s over the past 40+ years (as far back as our data set goes), we get a different picture of the market’s valuation in recent years. While the market did not reach the lows of the early 1980s, when the last secular bull market began, it did push below 9x earnings in the latest cycle, significantly less than the cash-adjusted average of about 15x. Currently, the cash-adjusted P/E is slightly below average.

The S&P 500 P/E ratio is below average when adjusted
for the unusually large deposits of cash on
U.S. corporate balance sheets. 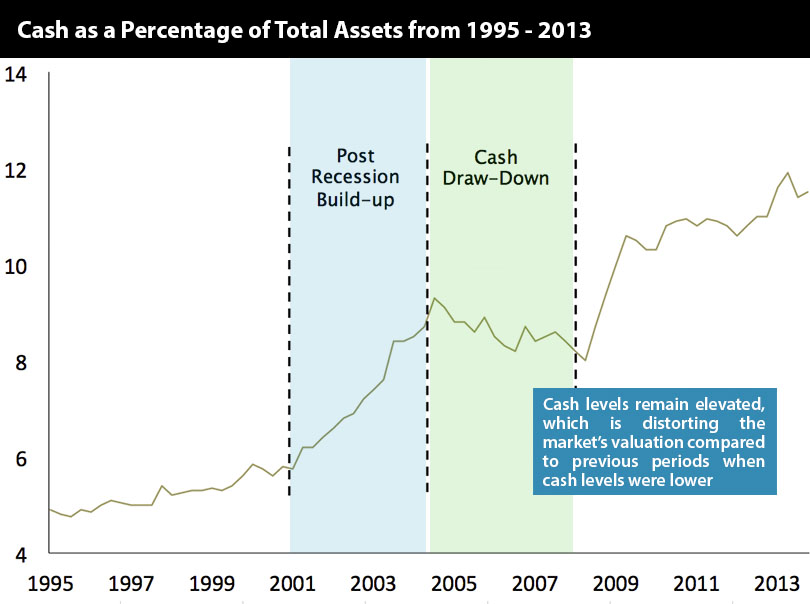 The End of a Crisis: Bull markets have tended to begin in the wake of major geopolitical events. The 1920s bull was launched soon after World War I, while similarly, the 1950s / 1960s bull was launched in the wake of World War II. While the 1980s/1990s bull did not come after a major war, it did follow a decade marked by oil embargoes, runaway commodity prices, skyrocketing inflation, and high unemployment (in a sense a war of a different kind). Similarly, the decade just past was marked by the bursting of the technology bubble, the war on terror, commodity price inflation and, ultimately, the financial crisis.

Investor Sentiment: While we do not have survey data for how investors felt about stocks in the early 1920s or late 1940s, we can say their views were likely very cautious at best. In both of those periods, the dividend yield of stocks was typically higher than the government bond yield. This preference for “a bird in the hand” suggested a distinct lack of confidence on the part of investors as to the sustainability of future corporate earnings and the likelihood that shares would rise in value. In the early 1980s, the prevailing negative view of the stock market was famously captured by BusinessWeek on its August 13, 1979 cover, “The Death of Equities.”

Widespread bearishness and skepticism can often signal that selling pressure has run its course (all those who wanted out are already out), allowing even modest positive catalysts to get the market turned around. In addition, sentiment often remains negative even after the market has embarked on a prolonged upward move, as skepticism that the market has left behind its previous problems continues to prevail even many years into the market recovery. For example, throughout the 1980s and into the 1990s, both stock and bond investors worried that a return to 1970s-style inflation was just around the corner. It wasn’t — leaving the economy to flourish, interest rates to steadily fall, and P/E multiples to rise.

Sectors that will be Drivers of the next Bull Cycle.

While we believe many of the elements that would persuade us the next secular bull market is underway have fallen into place, without a group of catalysts to sustain a prolonged upward move, the current rally could prove to be short-lived. Normally, unique catalysts characterize the secular bull market era and separate it from just another long rally. 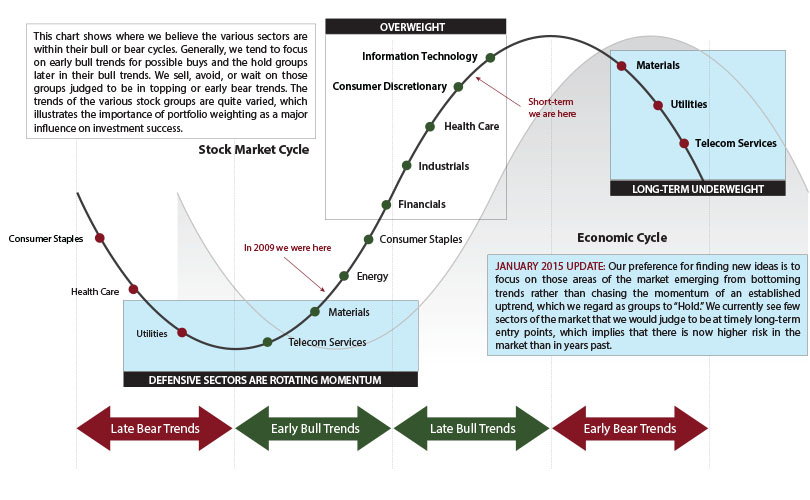 The transformational events of previous secular bulls included: the arrival of widespread electrification and the building of the national grid in the early decades of the 20th century; the arrival of the post-World War II baby boom; suburbanization and construction of the interstate highway system in the 1950s and 1960s; and in the 1980s, Reagan-era deregulation and tax code overhaul, followed by globalization and the technology boom of the 1990s.

While we cannot know with a high degree of certainty how the next decade will play out, we do believe there are several disruptive sectors and technologies already in evidence that could be powerful engines for the economy and stock prices in the years to come.

How to Position for a Sector Driven Secular Bull Market.

There is no single trigger that happens when a secular bull market begins. Day-to-day volatility, the massive, minute-by-minute flow of financial news, and even corporate earnings and shifting economic trends send mixed signals. For example, earnings growth was weak in the 1950s, averaging 3.8% per year, but the S&P 500 climbed 257% that decade during a secular bull run. When U.S. GDP growth was strong during the 1960s, averaging 6.9% per year, it was a mostly sideways decade for stocks. During the 1980s and 1990s, GDP growth was slightly below the historical average, yet the market delivered its strongest secular bull cycle ever.

We aren’t prepared to write off the current cycle as a secular bull candidate just because GDP growth has been subpar. When secular bulls are in the early stages, it usually doesn’t “feel” like the market is in the midst of a strong, long-lasting rally. Memories of the most recent bear market and lingering economic challenges are still front of mind. Scars from the global financial crisis are keeping many investors on the sidelines this go around, potentially just as the new secular bull is getting underway. Very few are acknowledging the market’s breakout in 2013, or are contemplating how to position portfolios for a secular bull run. This is an issue worth thinking about. The return differences between sideways cycles and secular bull markets are too great, and could have consequences for retirement savings and estate planning.

We recommend investors incorporate the growing probability that the new secular bull market in equities is underway into portfolio positioning today to take advantage of the substantial return differences that may materialize. With the strength of data that suggests the new secular bull market has arrived, we believe the prudent investment strategy is to position portfolios for the possibility by taking four strategic steps: