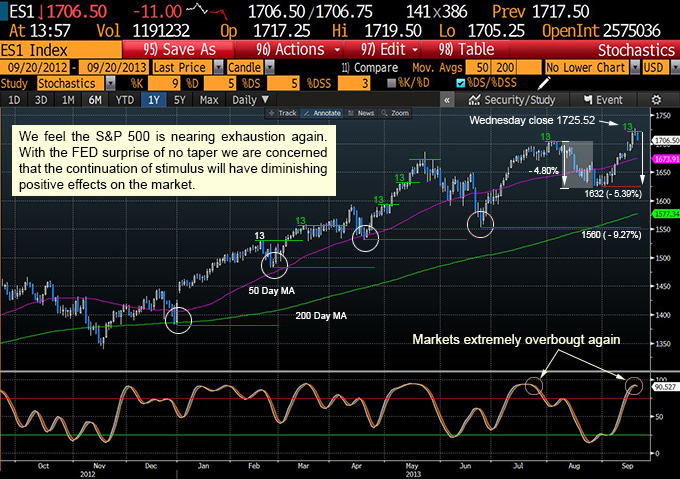 After gaining nearly 20 percent through Sept. 18, a number of technical studies indicate the S&P 500 index may now be nearing an exhaustion point. The S&P 500 uptrend may have reached an exhaustion point. In July we wrote that the market was at the highest point in history relative to its 200 day moving average (exhausted) at nearly the same price level as today. This study (which is slightly different than our previous studies) correctly anticipated a market correction (down -4.80%) which ended just below the 50 day moving average.

The Sept. 16 trading session completed a short-term reversal from the low and is suggesting the index’s uptrend may be exhausted again. While Wednesday’s price action puts the S&P 500 at an all-time high, exceeding the highs in July, certain conditions must be met to signal a resumption of the uptrend. The resistance risk level, which is used to identify a resistance level above the price bar where a sequential countdown (green 13) completes, resides at 1725.50. The S&P 500 closed Wednesday at 1725.52, or a two cent difference. This is an important resistance level to watch just as it was in July after the market failed to break above it which led to a -4.80% decline. Together, these indicators suggest the next 25 points higher for the S&P 500 will be hard-earned. To qualify a breakout above the risk level, the index must first record a lower close, followed by a close above the risk level, followed by a higher open and then at least one tick above the open.

As headwinds mount, we feel the market could re-test the two lower levels of 1632 (-5.39%) and 1560 (-9.27%). These corresponding levels could act as downside support to the markets and must be considered in downside strategy. We remain 20% in cash and will begin to build a short position early in the week.