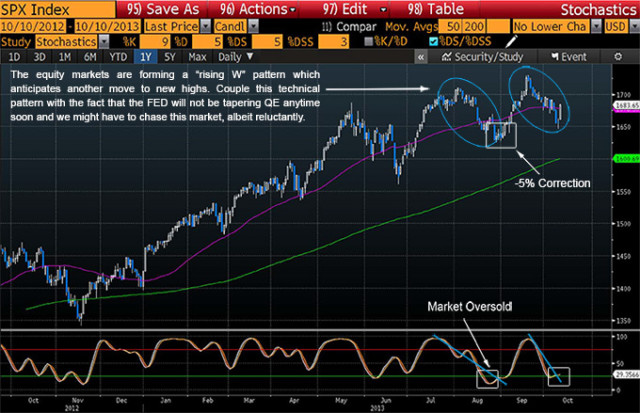 The following is an update on the market during this extreme time of uncertainty. This is a graph of the S&P 500. The first blue oval represents the timeframe just after we reported a possible top in the market in late July. We were cautious with the markets at all-time highs. We started raising cash and put a 12% short position on our portfolios to hedge for the downside and protect the accounts. At that time we were predicting a -5%, -7% or -9% correction. The market gave us -5%. The white square(s) indicate where the market stalled and where we elected to remove our short position. This corresponded with technical indicators showing an oversold level as represented by the lower white square. Even with all of the uncertainty, negative headwinds, and the fact that the FED did not taper (which was not perceived well by the Wall Street Elite), the market began to rally again. We did not reinvest the 25 % cash. The market hit new highs once again; then the Gov’t shutdown and the Debt Ceiling debate started. The second blue oval represents the last few weeks of uncertainty about the outcome of the Debt Ceiling. We have remained on the sidelines with our 25% cash weighting and 100% cash in the commodity account. Yesterday, Thursday, October 10, the market anticipated a deal in Washington and the markets rallied big. Does this make sense, NO? To date, there was no deal nor any resolution to the eminent problems facing this nation beyond a proposition to “kick the Debt Ceiling can” down the road until the week before Thanksgiving. Frankly, we are not buying it. With that said, the equity markets are forming a “rising W” pattern which anticipates another move to new highs. Couple this technical pattern with the fact that the FED will not be tapering anytime soon and we might have to chase this market, albeit reluctantly. We have a buy list ready; however we will only deploy cash when we feel more compelled to do so.