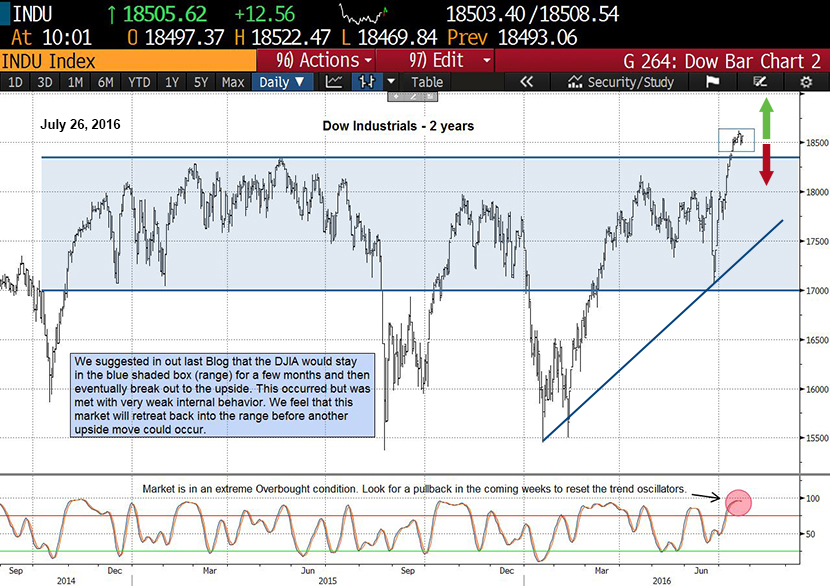 Markets Short Term and Intermediate Term Views
DOW JONES: The chart above was published in our July 26 Blog titled Weak Short-Term Breakout where we believed that the stock market was re-entering its long-term secular bull trend that has the potential to rise substantially over the next several years, and the intermediate-term trend for the next several months also looks bullish. However, on the shorter-term basis of days-to-weeks, it appears to us that the market was reaching an overbought condition that will likely soon lead to a pullback that could amount to about half of the recent advance from the 17,000 area. 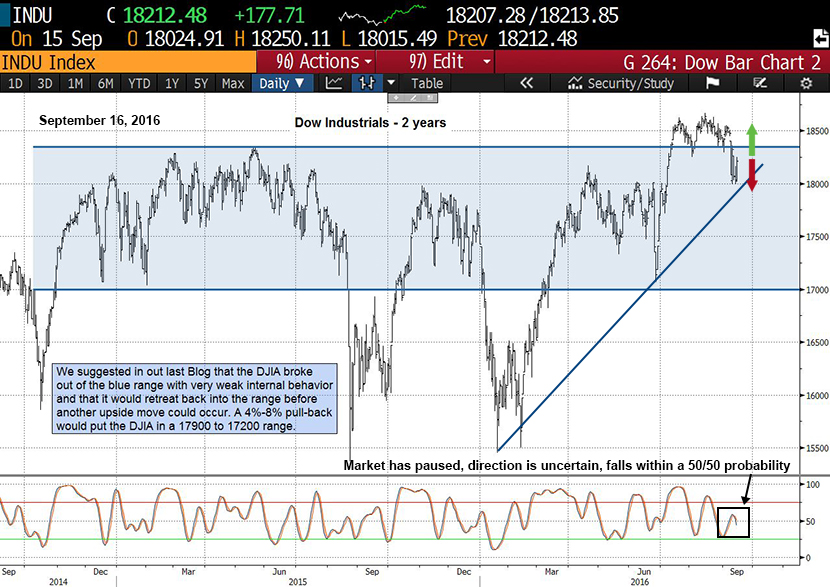 Short-Term (Days to Weeks): Correcting. In new chart above, we see the stock market indexes are pulling back in what appears to be a seasonal period of weakness, which is common for the month of September, which has the lowest average return of any other month. How far the market pulls back is up for debate, however, as there are no set rules or exact numbers that tell just how far the market may dip. Our estimate is that it will be somewhere in the 4% – 8% range, and it’s already down around 3% from the peak.

We suspect that the rest of September will see a more-volatile and choppy trend that will lead to a bottom sometime in early October, and then a year-end rally that could be much better than most would expect. The reasons for the market to pause are many, but we have already been seeing some weakness in the previously strong sectors of high-yield and Consumer Staples, while many other stock groups also appear to be correcting in a normal fashion. A market low point could coincide with a peak in the fear level that is being created by a slight rise in interest rates, which we have seen many times before.

Intermediate-Term (Weeks to Months): Bullish. In the chart below, the S&P (as well as the DOW JONES) broke out to new all-time highs in August, with the advance-decline broad measure of stock strength doing the same, which is a bullish market indication that we think implies the next six to 12 months could be positive for the indexes. We are also impressed by recent relative strength that has been coming into the higher P/E and generally more-aggressive small-cap and growth stocks, which we believe is also an indication of a developing bullish trend that could have longer-term bullish implications for the market as a whole. Of course, this forecast is on hold until the current market dip has run its course. 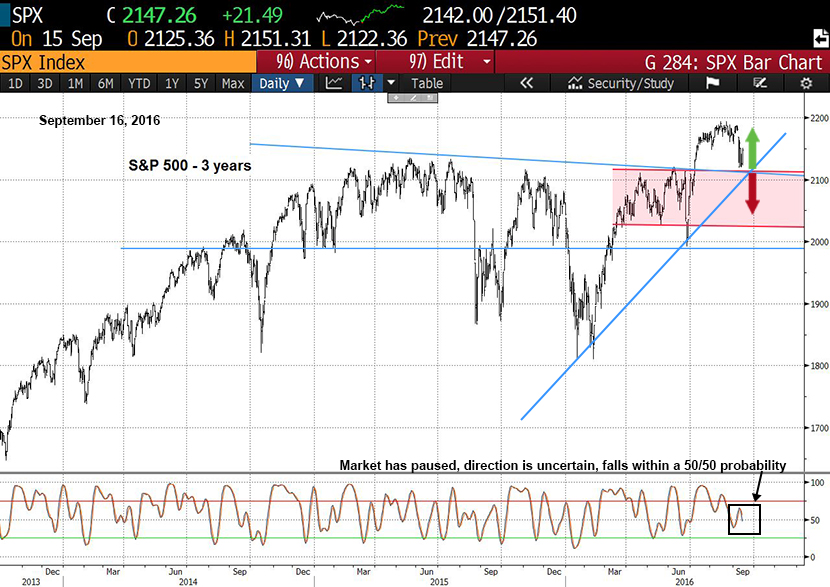 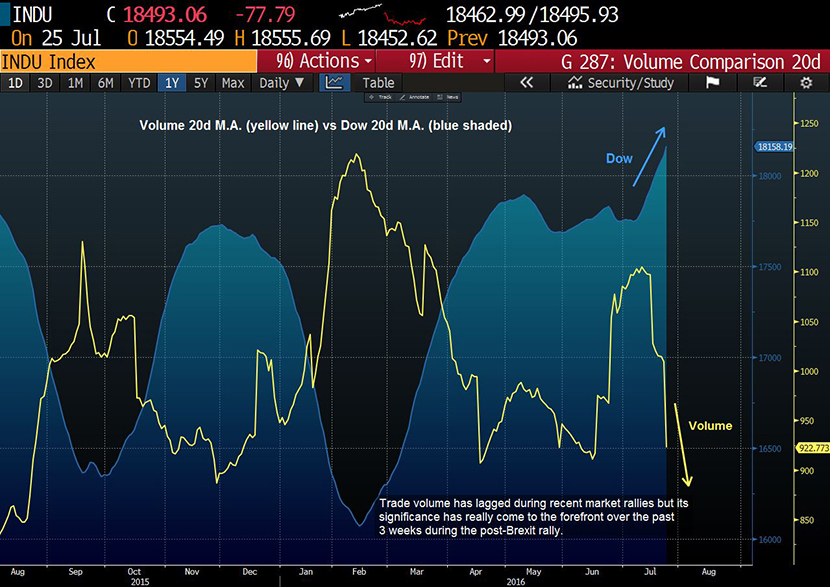 DOW JONES vs VOLUME: As referenced in our prior update (see chart above), trade volume has lagged during recent rallies but its significance has really come to the forefront over the past 3 weeks during the post-Brexit rally. While this lack of conviction is a red flag, when combined with the Overbought conditions seen in the trend oscillators (bottom pane of Dow and S&P charts shown above and below), we become very cautious over the direction of the market in the short-term.

The updated chart below shows the continuation of the volume decline corresponding with the decline (pullback) in the markets. However, the markets found a very short-term base and with it came a slight increase in volume. This explains the short term bottom. We must now determine whether the market has just paused before it continues its downward sell off or whether it starts its 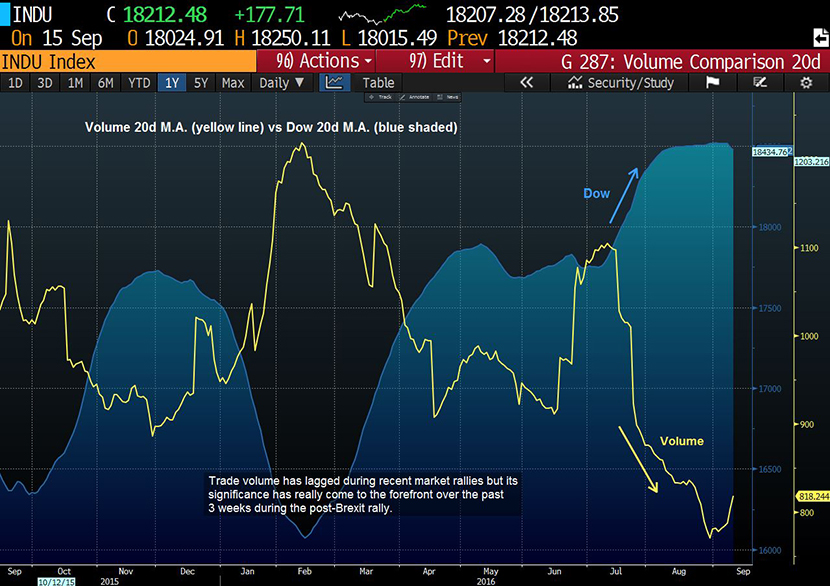 TRADING UPDATE: Given the trading range in the markets, our overall trading strategy of holding an above-average allocation in cash and exercising patience has changed little over the past few months. Using a bottom-up approach to security selection, we are taking advantage of shorter term equity investment opportunities as they present themselves while keeping cash on the sidelines. When we feel the markets have stabilized we will be reducing our cash weighting and increasing our market exposure by purchasing equities.