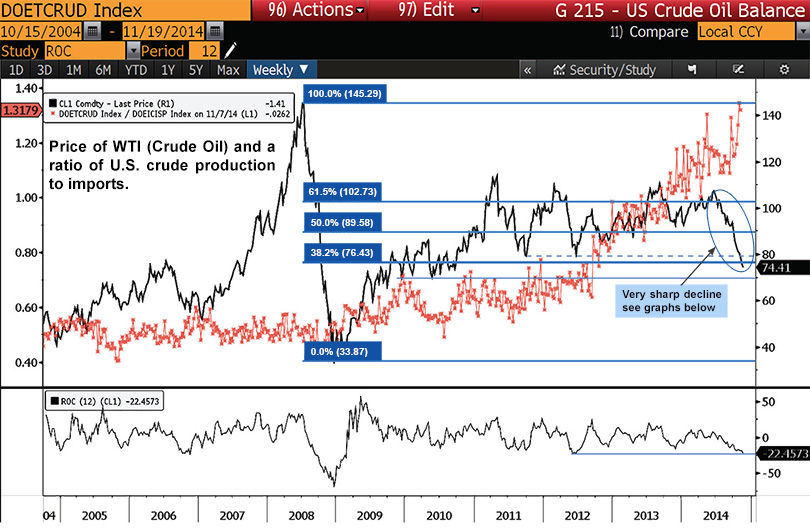 U.S. Oil Boom affects Global Supply and Demand
Total crude North American oil production has risen more than 50 percent over the past three years, reducing the need for U.S. crude imports, including barrels purchased for the nation’s strategic reserves, by 26 percent. Only a few times during this boom has West Texas Intermediate crude oil futures declined this far and this fast. The above chart shows the price of WTI and a ratio of U.S. crude production to imports. On a closing basis, WTI has declined to test the 38.2% retracement level inferred from the 2008 decline, reaching its lowest closing price since late 2010. The current price is below the 2011 and 2012 lows of $79.20 by almost $3 a barrel, suggesting $79.20 has changed from support to resistance in any short-term rally.

The 12-week rate of change indicator, shown in the bottom panel of the chart, shows the current negative momentum is still above the 2012 low, while price is lower. This is an early indication that WTI may have moved too far, too fast. The starred pink line illustrates the rate at which U.S. production is growing compared to U.S. imports. Since 2009, that line has been trending upward as domestic production replaces imports, leaving other producers like Nigeria and Mexico to adjust their export patterns.

CURRENT TRADING STRATEGY: It is our opinion that Oil and Unleaded Gas have declined too far and at an unsustainable pace. With the majority of trader’s short oil and unleaded gas, everyone is piling on in what is known as a crowded trade. When this happens sharp bounces usually occur. We have recently countered the trend by going long into both commodities. 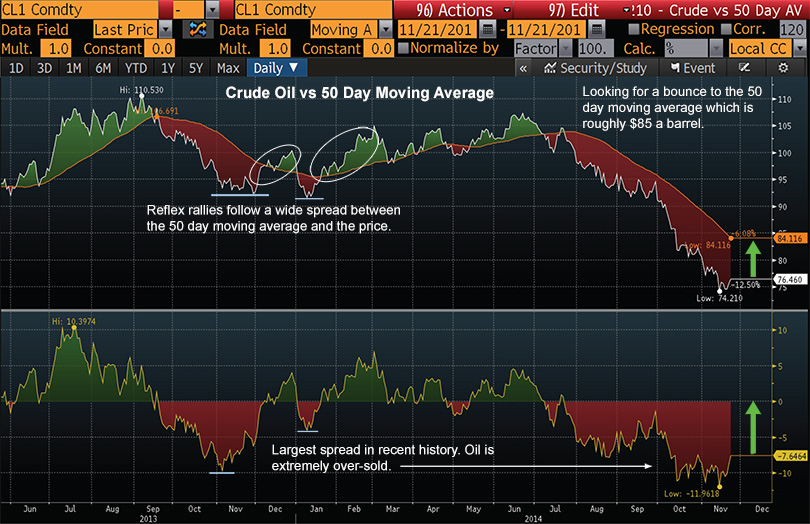 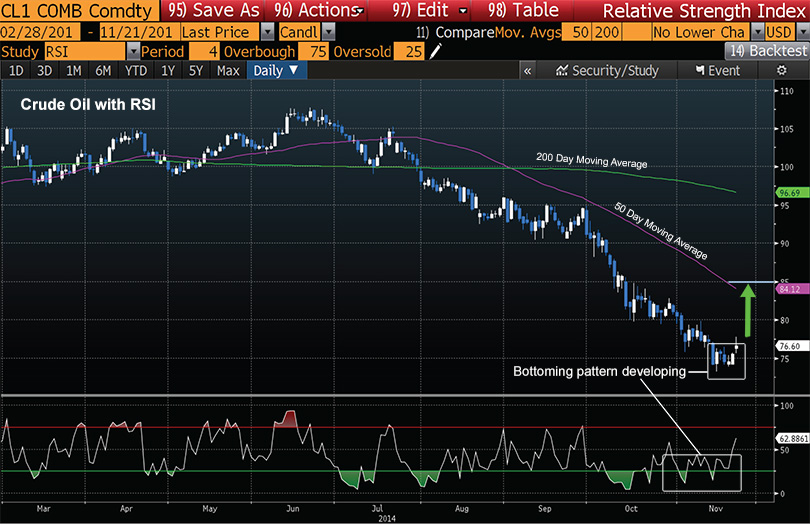 The graphs above reflect a shorter term view of the recent decline that began in July. The first graph shows the spread between the price of oil and its 50 day moving average. The large spread further indicates that the decline happened too fast and fell too far. We are looking for the price to retrace back to the 50 day moving average around the 85 dollar mark. The second graph shows the bottoming pattern that has been developing.

As reported earlier a more detailed update regarding our thoughts on the latter part of the fourth quarter and an update of our Central Bank Experiment & Asset Bubble (white paper) will be forthcoming in the next few weeks. Until then, we continue to remain diligent in our research and will continually monitor the markets and report back as data becomes available.