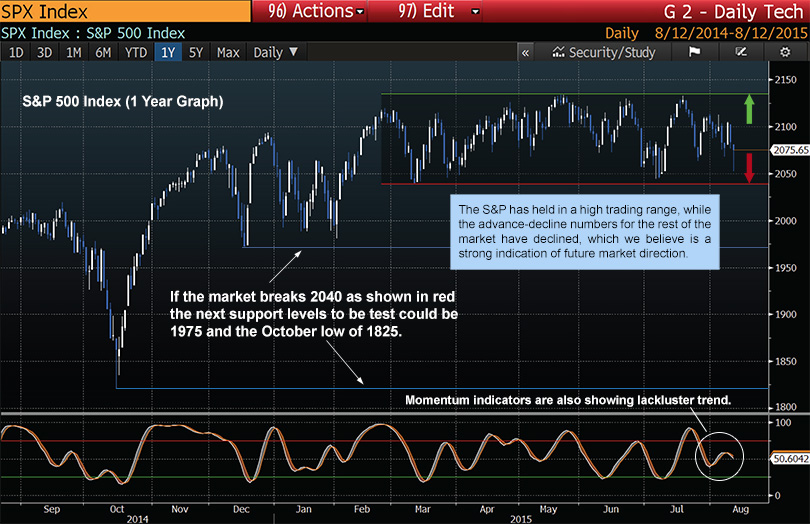 Some stocks and groups have been correcting all year, while other areas of the market are just starting to pull back, and a few stocks continue to hold up near their highs. However, the net number of declining stocks is still growing, which we believe implies that the correction period still has a ways to go. We anticipate that this consolidation and correction period will continue on in the same fashion that it has for most of the year, and that is a sloppy, rotational, and churning trend, that is lacking much of a clear direction. It’s not a bear market, it’s a consolidation, and we do not expect to see a big decline in the averages, although it could end up being something in the 10% correction area.

This summer has so far seen a large number of stocks in correcting trends, as measured by the Advance-Decline (A-D) line, while some of the large and mega-cap stocks have continued to hold up. These market internals supports the valuation levels of the market-weighted indices such as the S&P 500 and the Nasdaq 100. This is best exemplified in the above chart showing a range-bound S&P 500 while the A-D chart below highlights the growing number of declining stocks versus advancing stocks. Last week saw some of those larger names start to also pull back, and we believe the current market trend is still weakening unless it can string together a series of improving periods that can turn the overall trend to be much more bullish. A sell off in the larger-cap stocks will likely garner the most attention since it is starting to negatively affect the indexes that are followed by most investors and the media. We think this could be the last part of the correction process, but also the most dramatic as it may be accompanied by unsettling news of the variety that also can create great opportunity. 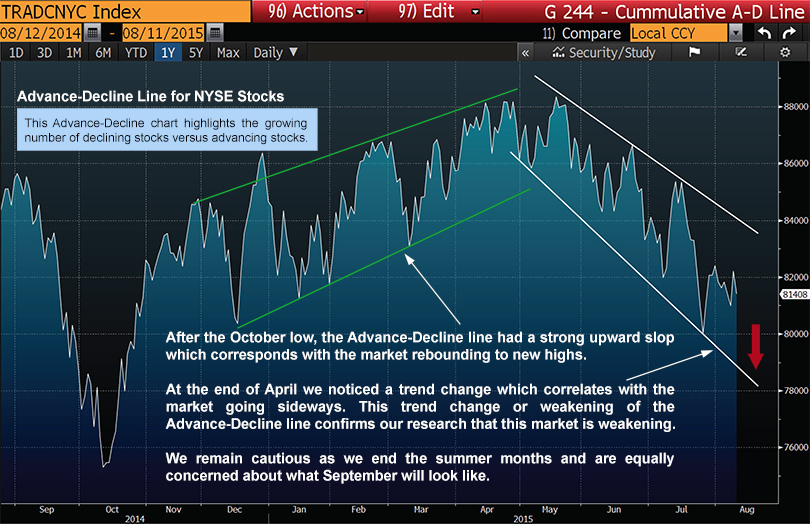 It is important to understand that any short-term moves by the market that take place over a period of weeks and months is taking place within the longer-term framework of a multi-year secular bull market that we believe has many years to go. So, we will be looking for that exceptional buy point at the end of a correction, but exactly when and at what level remains a mystery to us until the market shows us where it is.

TRADING UPDATE: With continued weakness of market internals, we continue to see no compelling reason to be fully invested. We have continued to hold our counter-trend downside hedge in the portfolios and will stand ready to increase the hedge and/or raise cash if we see the markets weaken quickly. This would give us a more favorable area to enter the markets. After we get through this short-term phase we anticipate getting fully invested. For the Intermediate term (weeks to months) and long-term (months to years), we remain bullish as we are in a long-term secular bull phase. Until then, we continue to remain diligent in our research and will continually monitor the markets and report back as data becomes available.