Several geopolitical events have occurred over the past week that have either clarified each of the issue’s respective resolution or clouded them even further. While Greece and the EU have reached an agreement in principle, Greece’s Prime Minister is facing a rebellion from some of his allies in government over the deal that he struck. The deal must still be approved by the various EU countries’ governments and by Greece’s parliament. Beyond that, Greece would still need to pass legislation that meets the requirements of each covenant in the agreement. So while the market rallied on this news, there is still a long row to hoe and there are numerous skeptics that Greece will ever meet all the conditions of the agreement.

As well, Iran and six world powers sealed a historic accord to curb the Islamic Republic’s nuclear program in return for the lifting of sanctions. While the impact of this on the U.S. economy and financial markets is minimal, there will be further production added to the already high crude oil supplies and may add stress to already low oil prices.

To provide support to a slowing economy and struggling financial markets, China has implemented numerous measures for support. China’s policy makers are up-sizing their response to an equities rout that’s erased $3.5 trillion in value after measures so far failed to quell investor panic. Among the latest developments, China is seeking $81 billion in liquidity to support the stock market. The final amount has yet to be set and may be far higher, according to some analysts. As well, China regulators have banned major stockholders from selling stakes in listed companies and have allowed banks to roll over loans backed by listed shares. 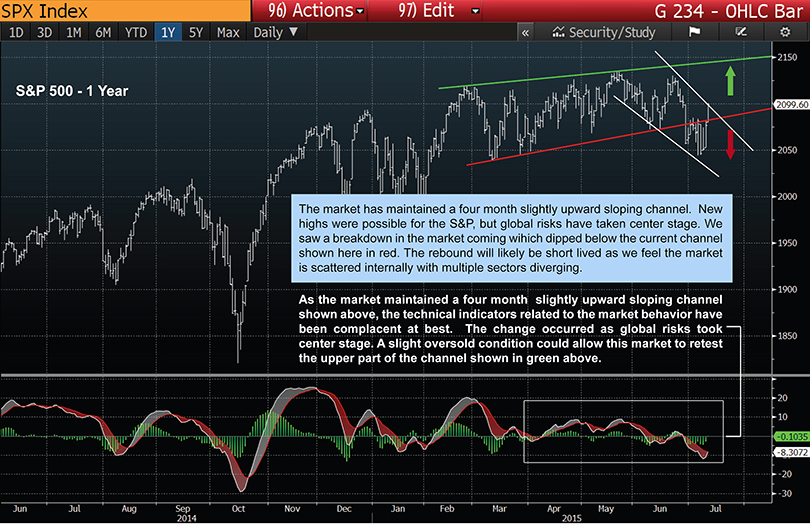 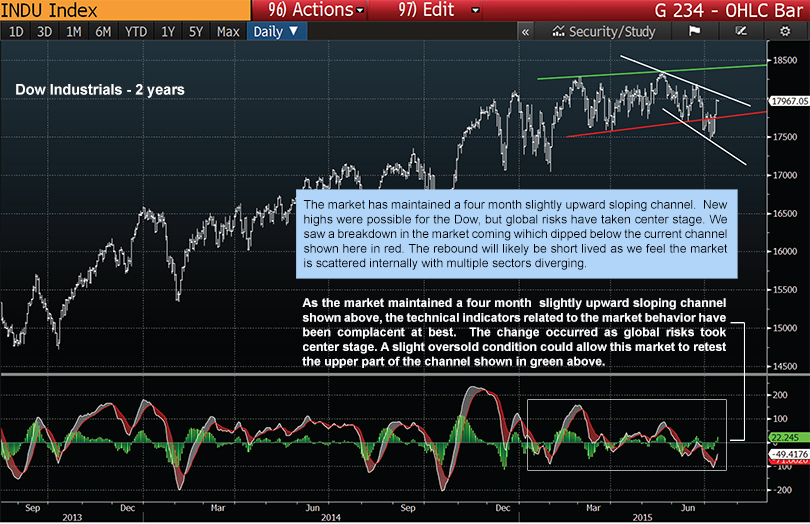 U.S. MARKETS: The Dow Industrials and the S&P 500 are continuing their ranges for the year, which during the past two months have been developing into a pattern of lower highs and lower lows. The current rally is bringing the indexes back up to the top end of the ranges where the real test will be on whether they can break out to new all-time highs or not. Judging from the trading pattern for the year so far, we believe it is more likely that the market will stall near the top of the range yet again. The problem as we see it is that there are still too many sectors, groups, and stocks that are in diverse enough trends as to not be supportive of a larger market move in either direction. This same net-neutral action has held the DJIA and S&P in relatively stable ranges for all of this year and we believe could continue for some time, as the larger gains of previous years “average out” in a normal consolidating process.

It really is a continuing overall mixed trend that we believe may not amount to much in either direction for another month or two. It is interesting, however, that with each rally or pullback, how the sentiment can shift from hopeful to disappointment, but even the sentiment readings are stuck mostly in neutral and are not reaching the kinds of extremes that are normally associated with a major top or bottom.

Over the last month we have been writing about the volume levels and the probability of a directional change in the markets. Here is a graph that we feel supports our theory that the markets could have some downside pressure again after the bounce that ensued based on Greece agreeing to receive help. 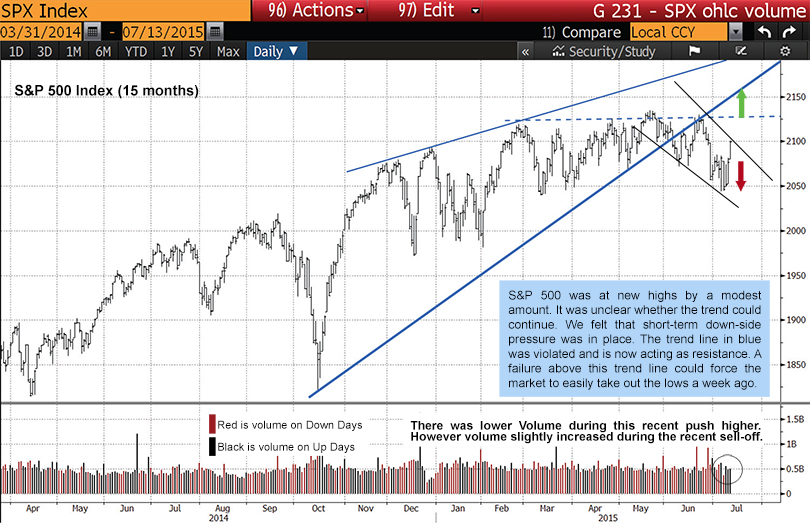 Volume remains relatively low (despite a few days of increased market weakness) without the participation of a larger part of the rest of the market. A market move to new highs would prove to be suspect. This has caused an overall attitude of complacency in a market that has been mostly rewarding to those who are willing to own the highest volatility and most risky of the large-cap growth stocks, while most of the rest of the stocks in the market struggle to find a bull trend.

VOLATILITY: We also wrote about the low level of the VIX index and probability of a directional change to the upside if the markets retreat and sell off and we got it. Here is a graph that we feel is supporting our theory that the markets could have some downside pressure soon and that the VIX could move aggressively higher again if the recent bounce fails. 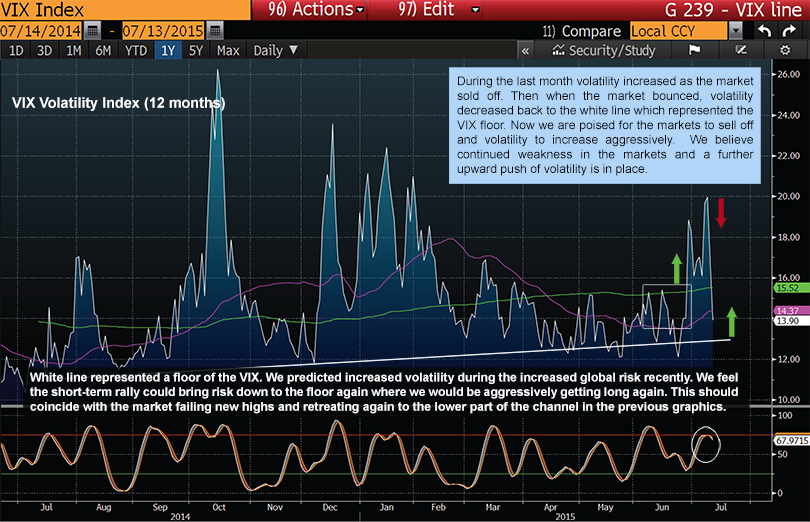 This was supported by the extremely low reading in the volatility Index (VIX), however over the last month when the market showed weakness it caused a slight lift to volatility. We think that the situation is not likely to clear up over the next few months with most of the indexes signaling that we are close to a mini-corrective move. We were leaning towards the possibility of a short-term corrective move of 3% to 5% (and we got it) rather than a meaningful move to the upside from here. If it gains downside momentum we would not be surprised to see 7% to 10% reached.

TRADING UPDATE: Diminished or lack of global growth could derail generally bullish (mixed) US fundamentals. This may contribute to increased headline volatility that is difficult (if not impossible) to anticipate as to when it may occur with either fundamental or technical analysis. We have stopped buying equities at this time with no compelling reason to be fully invested. This market was being forced higher and we were moving in unison with the rally. However, we are still cautious in the short-term (days to weeks) and will look for anything that could derail the current trend. We have continued to hold our counter-trend downside hedge in the portfolios and will stand ready to increase the exposure if we see the markets weaken quickly. This would give us a more favorable area to enter the markets. After we get through this short-term phase we anticipate getting fully invested. Intermediate term (weeks to months) and long-term (months to years) we remain bullish as we are in a long-term secular bull phase. Until then, we continue to remain diligent in our research and will continually monitor the markets and report back as data becomes available.