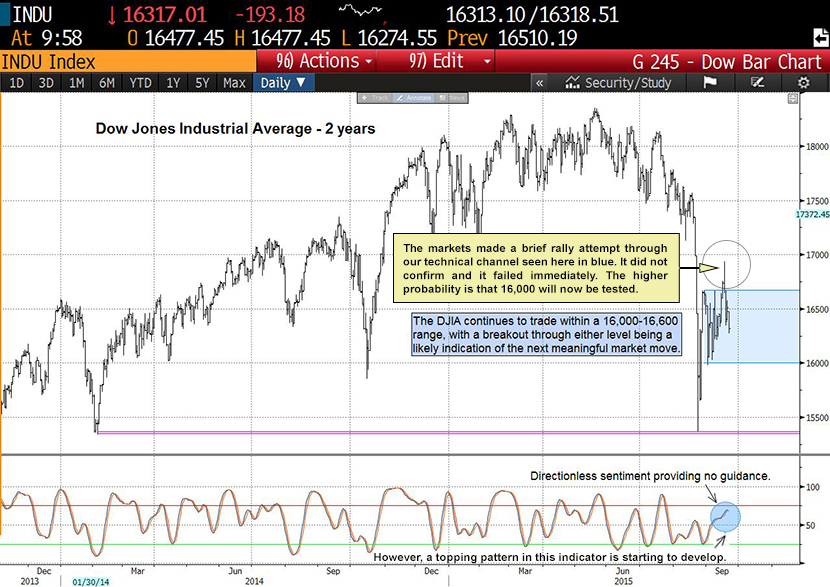 The recent market correction has continued to cause the general sentiment and opinion to turn much more bearish, which is common to see after a significant financial market pullback. This makes it especially difficult to tell if the market is making a low or not (see the violent spike up through the blue shaded area that did not hold in graph 2 above), as the news and market statistics are also in a pretty negative position, but all of that is also normal for a market that has had a substantial correction.

In the days since our last update after the lows were made on August 24, the market has struggled to find its footing but attempted to rally (through the blue shaded area) and quickly failed as portfolio managers were selling into the rally thinking it would be short lived. We use the numbers and levels on the market to help in determining if a bottom is forming, and for the current pullback, the low of 15,350 to 15,370 on the Dow Industrials is the ultimate low that must hold. We’re not convinced it will. However, the two more recent bottoms around 16,000 are still the more important support levels to watch as critical to stay above. Along with a resistance levels around 16,660 (highs that have been hit on 3 separate days), a convincing and confirmed breakout through either the 16,000 or 16,660 level is a likely indication of the next meaningful market move.

VOLATILITY: We have been writing over the past few months about volatility with respect to the VIX. We referenced the low level of the VIX index and probability of a directional change to the upside if the markets retreat and sell off. We were leaning towards the possibility of a short-term corrective move of 3% to 5% then a higher probability of downside momentum where we were calling for a 7% to 10% corrective move. We got it. The question now is… What is our strategy going forward? See TRADING UPDATE below.

Here is a graph that we feel is supporting our theory that the markets could continue to see downside pressure if the recent bounce fails or technical levels are broken on the downside. Until the VIX stabilizes we feel that there is still downside pressure in the markets. We think that the situation is not likely to clear up in the short run with most of the indexes still in correction territory. 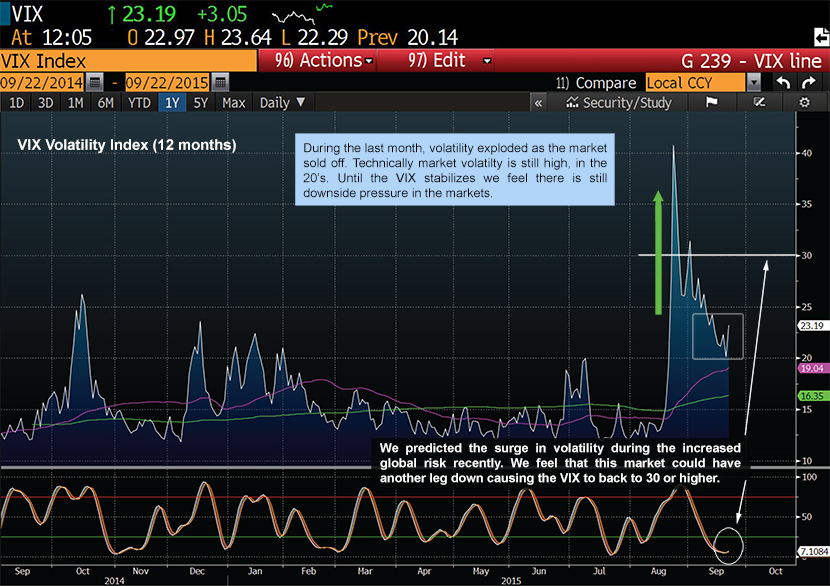 TRADING UPDATE: As a reminder, the indexes are off more than 10% from their highs, we are looking to hold what we have and put at least some cash back to work into stocks as conditions warrant. At this time we are not seeing clear indications of what areas of the market may lead in a recovery, so a more general approach is best at this time.

We continue to hold cash levels of 30-34% that are limiting the portfolios to about 60% of the market volatility. The cash can be put to work quickly should we see opportunities present themselves and the hedge positions will remain a trading tool to improve risk exposure in the portfolios.