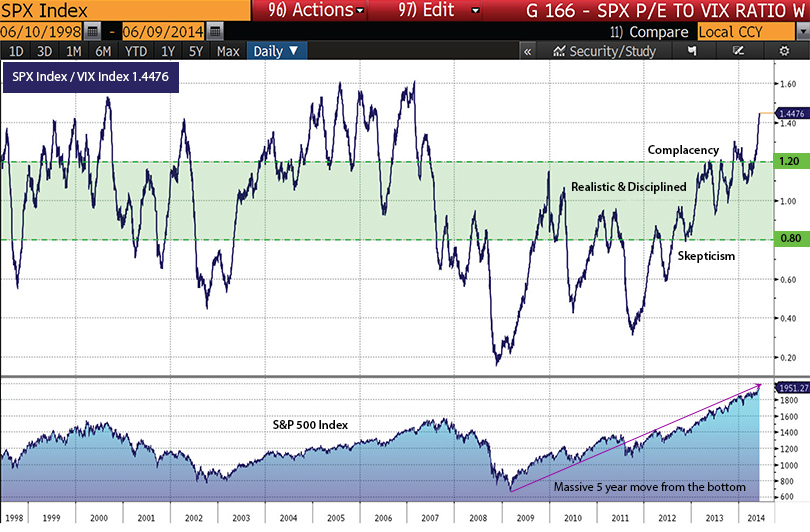 Our research into rising valuations and falling volatility suggests that the next 5 percent move in stocks will be lower. It is a very small move relative to the overall market performance over the last few years, however the markets need to correct and volatility must return in order to maintain healthy market balance. The chart above compares the price-to-earnings ratio for the Standard & Poor’s 500 Index with the 30 day average for the Chicago Board Options Exchange Volatility Index, or the VIX. The S&P 500 is close to exceeding 18 times earnings for the first time since 2010, according to data compiled by Bloomberg.

The VIX’s average close for the 30 days ending June 9, 2014 was 12.41, which would be the lowest for this figure since March of 2007. Dividing the S&P’s P/E by the VIX average produces a ratio of 1.44. At readings greater than 1.2, this gauge points toward complacency among investors. We would expect the S&P 500 index to retrace to 1,850 (just below the 50 day moving average) during the summer months which represents a decline of -5.2 percent from yesterday’s close.

The chart below is the S&P 500 over the last three years. We once again we find ourselves at an inflection point. The markets have recently rebounded from the February pullback and have returned to new highs. They are now showing extreme, technically overbought conditions along with low volatility complacency. The market’s overbought condition and investor complacency is significant as we head into the summer months especially after the frequently forecasted seasonal event “sell-in-May-and-go-away” did not come to fruition. We feel the correction has been delayed and that the summer months could still see a corrective period through late August when equities typically find a bottom, consolidate and prepare for a move higher in the fall months. With all of the historical research we follow combined with the headwinds that the markets are still facing (Fed tapering, reduced growth forecasts and potential geopolitical events), we are repositioning our portfolios to protect and prepare for a corrective move.