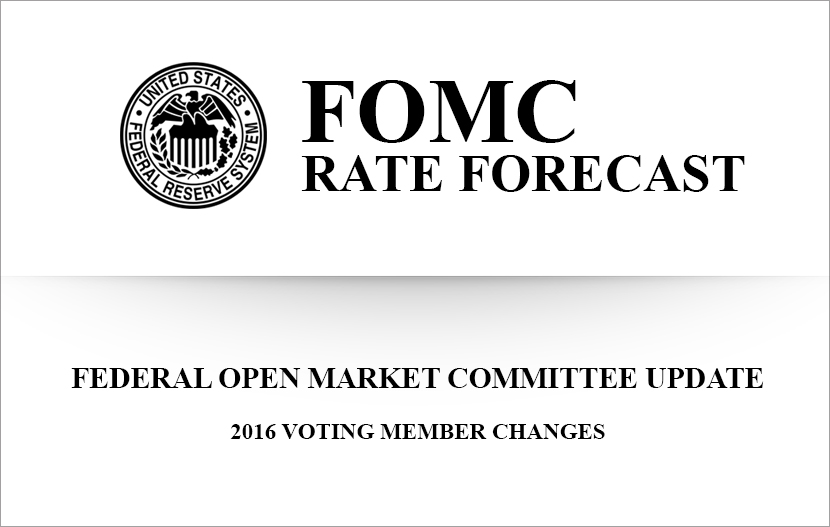 The average rating of the Federal Reserve regional presidents from Cleveland, Boston, St. Louis and Kansas City indicates they tilt toward a hawkish stance while the current rotation from Chicago, Richmond, Atlanta and San Francisco is somewhat dovish as a group.

The table below was updated Nov. 24 and ranks members from most ‘dovish’ and unlikely to raise rates (-2) to most ‘hawkish’ and likely to hike borrowing costs (+2). It shows that the incoming rotation for 2016 (listed as this year’s ‘Alternate voters’) has an average rating of 0.5, compared with -0.25 for the outgoing members (the last four under the list of ‘Voting regional FRB Presidents’).

The average rating for next year’s FOMC including Fed Chair Janet Yellen and other permanent voters will be -0.4, less dovish than the current -0.7. Two voters received lower ratings in the current ranking, reflecting more dovish stances. Yellen stayed at -1. The ratings are based on a subjective assessment of public comments.

We feel this is not a sufficient change in the collective temperament of the committee to materially impact the course of monetary policy next year, although it could mean that the number of hawkish dissents increases.

The U.S. Economy Still Has Plenty of Room to Grow

As the U.S. expansion drags on, equity markets and corporate profits reaches record levels and the Fed gets ready for liftoff, some may fear that a recession is coming. However, the U.S. economy is not yet late-cycle and there is more room to grow.

We evaluate nine leading and five key coincident economic indicators to determine where we are in the business cycle. We are 77 months into the current economic expansion, surpassing the average length (63 months) of expansions recorded since World War Two, excluding the short-lived expansion from July 1980 to July 1981 associated with double-dip recession. This time is different since we have never had rates so close to zero at this stage in a cycle, or such a slow expansion following a deep recession. These are all ingredients for a continued long — albeit not robust — expansion that could rival in duration the move from March 1991 to March 2001.

Recessions are usually triggered when the economy overheats and the Fed raises rates in response, or when there is a financial crisis. The economy is far from overheating, so if there is going to be a recession that keeps this cycle close to a “normal” length, it is likely to be triggered by financial stress.

The GDP output gap provides a good indicator of whether the economy is in the early, mid- or late stages, or if it’s overheating. Overheating comes when actual GDP exceeds potential and there is a positive output gap. Currently we estimate that the output gap is negative, with the amount of slack around 3 percent of GDP. This signals that the U.S. economy is far from overheating and there is a lot of room left for the expansion to run.

This contrasts with the Fed’s updated FRBUS macro model, which shows that the output gap is closed. FRBUS suggests the business cycle is a lot more mature than we estimate, and this helps explain why many FOMC members are so eager to start raising rates. Besides the output gap, there is a broad set of key coincident and leading indicators which helps determine where we are in the business cycle and where the economy might be headed. No two business cycles are the same and no single indicator can provide a complete and accurate picture, but together these key indicators prove quite accurate.

We examined the coincident indicators that The Conference Board includes in its Coincident Economic Index and the NBER monitors to date economic expansions and contractions. They are: nonfarm payrolls, personal income less transfer payments, manufacturing and trade sales, and industrial production. We calculate how much individual indicators change from the peak level recorded around the start of a recession through the peak reached ahead of the next downturn. Thus, we calculate the cycle peak-to-peak performance of each individual indicator. Collectively the indicators provide guidance as to whether the economy is early, mid or late-cycle. All of the key coincident economic indicators signal the U.S. economy is far from late-cycle and, thus, has much more room to expand.

We reference the leading economic indicators that are part of The Conference Board’s Leading Economic Index and examine the behavior of the following indicators: initial jobless claims, manufacturing hours, housing permits, stock prices, interest rate spreads, and corporate credit measures. The signals from the leading indicators are more varied as the low level of jobless claims reflects a large reduction of slack in the labor market. This is consistent with a low 5 percent unemployment rate and lines up in the late-cycle category. Similarly, the manufacturing work week has outperformed compared to recent expansions and warns we could be moving into a late-cycle phase. However, on the other side of the spectrum, the yield curve as defined as the 10-year Treasury yield less the fed funds rate remains historically wide. This is indicative of extremely accommodative monetary policy.

Even if the Fed hikes in December, as we forecast, the yield curve will remain quite steep signaling the economy is not yet in the latter part of the cycle. Similarly, another key leading indicator, housing permits, have only recovered about half of their prior peak. Therefore, we see lots of room for growth in the housing sector, which bodes well for continued expansion in the U.S. economy.

TRADING UPDATE: We have been putting a limited amount of cash to work into stocks as conditions warrant. At this time we are not seeing clear indications of what areas of the market may lead in a recovery, so a more general approach is best at this time.

We continue to hold cash levels of 30 – 35% that are limiting the portfolios to about 65% of the market volatility. The cash can be put to work quickly should we see opportunities present themselves and the hedge positions will remain a trading tool to improve risk exposure in the portfolios.