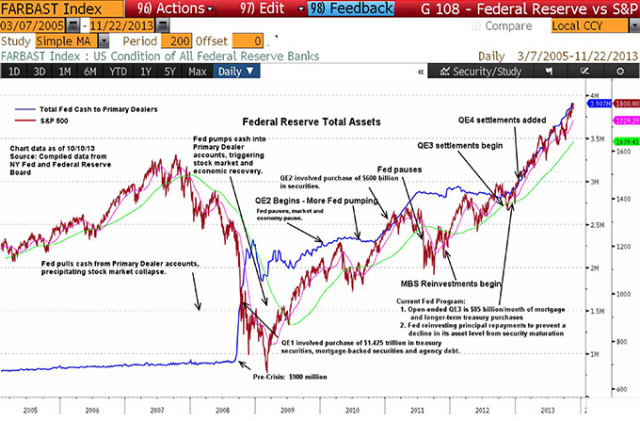 Central Bank Whispers
Mario Draghi, Ben Bernanke’s equivalent at the European Central Bank, has floated speculation that the ECB will begin charging member banks a “negative deposit rate” for banks depositing funds at the ECB. For the record, similar whispers are surfacing at the US Federal Reserve. The effects of a negative deposit rate, in our opinion, could be very bullish for the following reasons: However, in the shorter term (over the next few months), there are some significant headwinds. The markets will need to digest the “taper effect” that will undoubtedly dominate the talking heads and perhaps Federal Reserve governors as they consider reducing the monetary stimulus or QE which is approximately $85B per month.

In our opinion, any “tapering” by the Fed in the near term (next six months) will be largely ceremonial with a reduction, if any, of between $5-15B per month. Another alternative to the taper discussion is the probability that a Janet Yellen led Federal Reserve may consider increasing the QE stimulus. This is probable, given her largely Keynesian academic influences and an inherited dovish dominated board of voting members with the noted exception of Charles Plosser who becomes a voting member in 2014.

To summarize, we feel there will be additional headwinds that might temper market advances and enthusiasm in the nearer-term, including the negative polls data recently regarding the Obama Administration and another round of debt debates from a dysfunctional Congress. The longer-term counterbalances however are significant and worth repeating. Corporate America has become extremely lean of their balance sheets. Although slowing in acceleration, profit margins are still expanding with new markets opening globally fostering continued growth. Any structural improvements from Washington, or relevant increases in M2 velocity, will geometrically affect corporate revenues and job growth as corporate balance sheets are awash with liquidity.