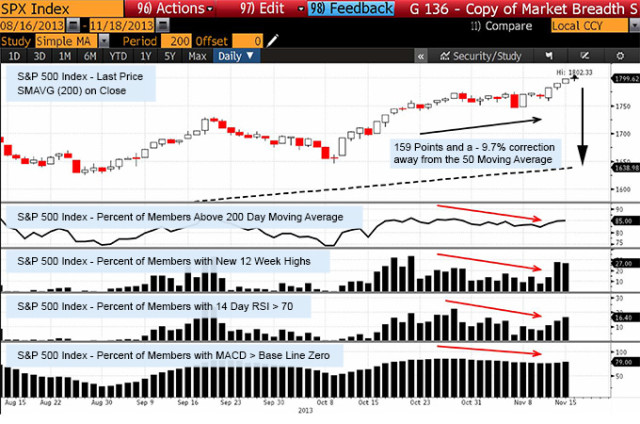 Market Breadth, Sector Rotation Suggest S&P 500 Bullish Trend Losing Momentum
A combination of technical studies suggest the S&P 500 index may be nearing the end of its advance from the March 2009 lows. Analysis of market breadth involves studying the performance of the components (underlying holdings) within an index to assess the internal strength or weakness of the overall index. Near the end of sustained market rallies it is common to see investors shift out of the high beta stocks (small cap) that lead the early stage of the advance and into large cap defensive sectors which are more likely to outperform on a relative basis during a market correction. This shift reflects increasing cautiousness by investors as stocks advance and expectations for a correction increase. In such circumstances the market often closes up for the day even as less than 50 percent of the underlying holdings close in positive territory. This occurs as investors rotate into large cap defensive stocks, which tend to have larger market capitalizations, thus making it possible for the market cap-weighted index to close higher even when more stocks close down for the day than up.

The S&P 500 has been in a primary uptrend since the March 2009 lows, which means it has been advancing for about 57 months. The average duration for equity bull markets is around 60 months, suggesting that the S&P 500 is potentially in the latter stages of its long-term advance. Comparing the performance of the S&P 500 daily price chart with some market breadth indicators, there are several bearish divergence signals, meaning that new highs in the market are not being confirmed by the market breadth studies. The S&P 500 is well above the 200- day simple moving average, yet the percentage of members that are above their individual 200-day simple moving averages is falling. Similarly, with the S&P 500 still hovering around all-time highs, the percentage of members making new 12-week highs has been dropping since mid-October. The same divergence can be seen between the price of the index and both the number of stocks with RSI readings above 70 and with MACD readings above the zero base line.

We have maintained short positions in the S&P 500, NASDAQ and Dow using some of the cash weighting (25%) in the portfolio to do so. At a minimum we are looking for a -3, -5 or -7% corrective move (short term) in the US markets and a corresponding -5 to -9% corrective move in the European markets. We are positioned for both. Patience is needed as we work through seasonality (holidays) and a potential (Christmas rally). We remain very cautious and extremely aware of the daily market behavior.