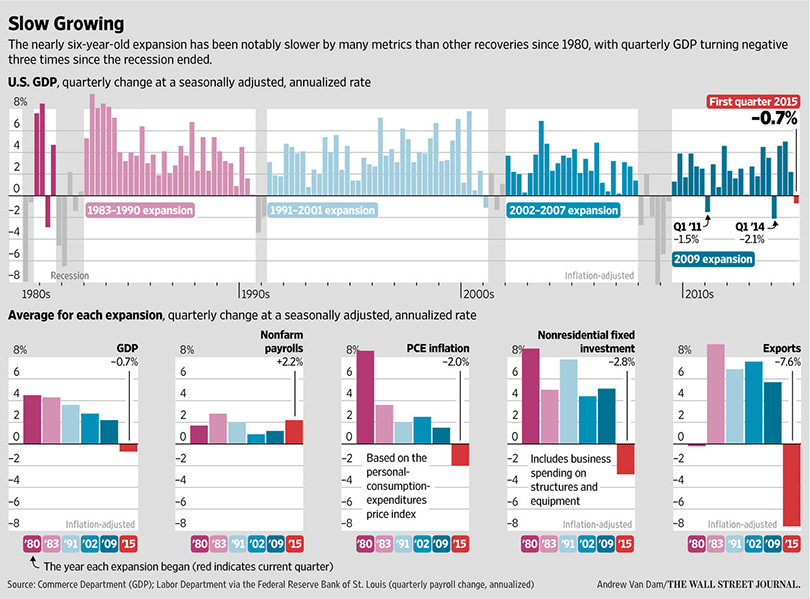 The U.S. economy shrank during the first quarter as another brutal winter highlighted the fragility of the nearly six-year-old expansion, a historically choppy stretch during which the nation has struggled to thrive in an uneven global environment.

Gross domestic product (GDP), the broadest measure of goods and services produced across the U.S., contracted at a 0.7% annual rate during the first three months of the year, the Commerce Department said Friday. That was far worse than the agency’s initial estimate that showed 0.2% growth, marking an abrupt reversal from the prior nine months when growth surged and the economy appeared on the verge of a long-delayed breakout.

The economy has now contracted in three separate quarters since the recession ended in mid-2009, a series of disappointments unmatched since the expansions of the 1950s. Harsh weather, a strong dollar and a labor dispute at West Coast ports appeared to be the biggest culprits this time, all sapping demand for American goods at home and abroad.

The Federal Reserve has viewed the first-quarter stumble as due largely to transitory factors—such as the stronger dollar—that will dissipate in coming months. The central bank is looking for signs of a rebound soon as it plots when and how quickly to raise short-term interest rates, which have been near zero since December 2008 to stir economic growth.

Economists generally expect the economy to bounce back this spring, as it did after first-quarter contractions in 2011 and 2014. But they warned growth will likely remain modest, in line with the roughly 2% overall pace of recent years. The first half of 2015 is shaping up to be one of the weakest six-month stretches of the expansion, with economists predicting annualized growth of between 2% and 3% during the current quarter. By comparison, the economy grew more than 3% a year on average between 1983 and 2007.

Further complicating the outlook is that other signs point to the economy humming along at a steady, though modest, growth pace. Company layoffs are exceptionally low and hiring across the U.S. remains solid. Mortgage applications are up amid other signs of growing housing demand. Some of the strongest headwinds facing the U.S. are tied to economic woes around the globe, including the U.S.’s biggest trading partners. Canada reported Friday that its economy unexpectedly contracted at a 0.6% annual pace in the first quarter. The stronger dollar, which makes U.S. goods more expensive abroad, also hasn’t helped. Friday’s GDP report showed that U.S. exports of goods fell by the most since early 2009, during the waning months of the recession. While a key measure of U.S. corporations’ after-tax profits grew 3.1% over the period, it wasn’t on pace to match the growth of the prior two years.

The strength of an economic rebound will hinge largely on the health of consumers. Consumer spending, representing more than two-thirds of overall economic output, grew at a 1.8% rate in the first quarter, far slower than the fourth quarter’s 4.4% growth. Household spending on long-lasting manufactured items was the weakest in nearly four years. That may have been tied to nasty weather, though consumers also appear wary about the economy’s strength. A University of Michigan measure of consumer sentiment on Friday showed consumer attitudes at a six-month low in May. 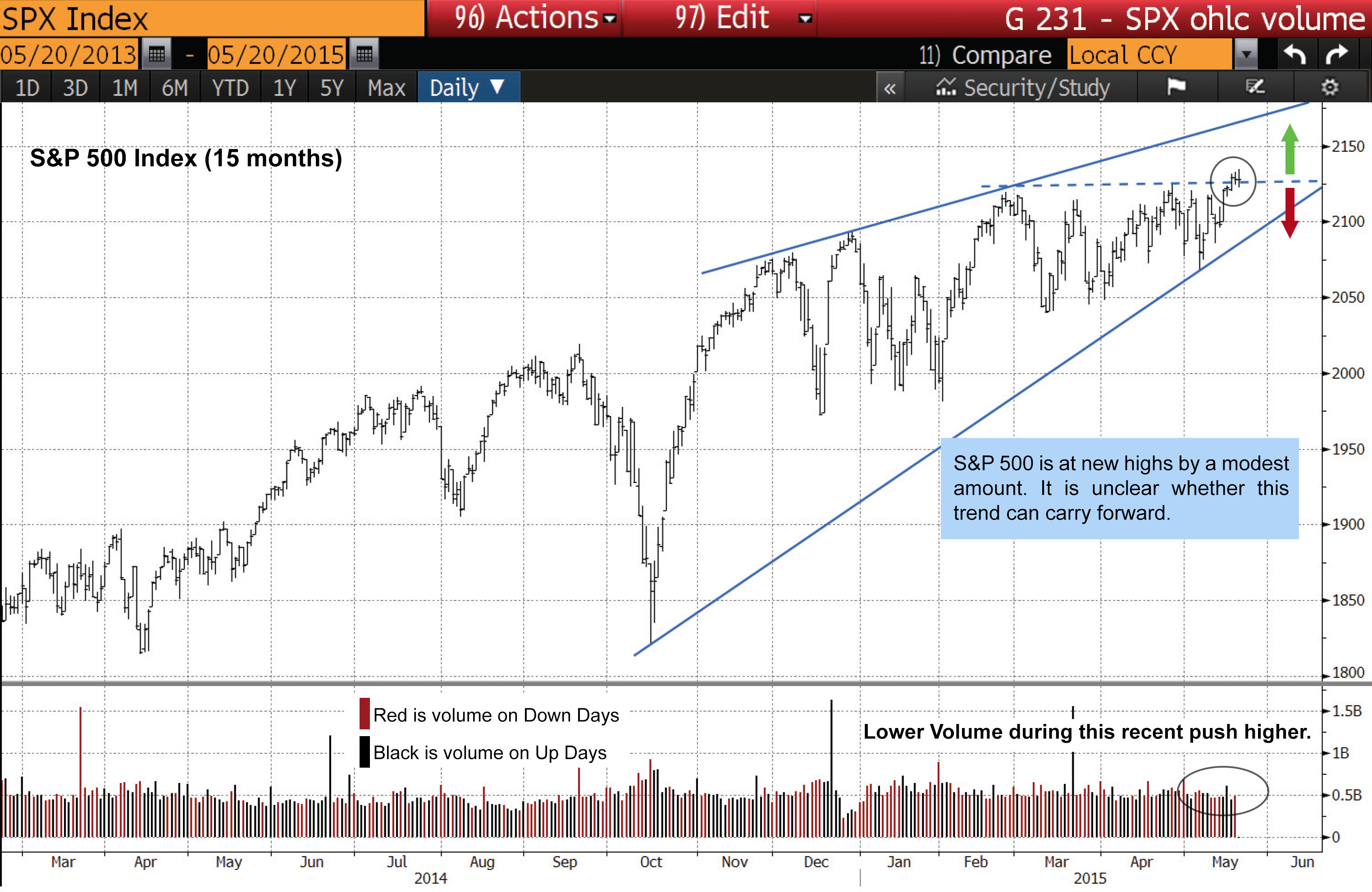 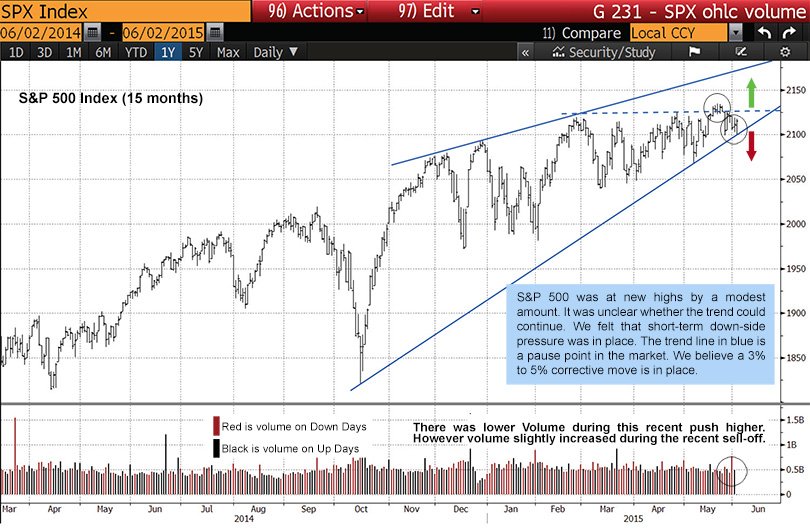 Volume remains relatively low (despite a few days of increased market weakness) without the participation of a larger part of the rest of the market. A market move to new highs would prove to be suspect. This has caused an overall attitude of complacency in a market that has been mostly rewarding to those who are willing to own the highest volatility and most risky of the large-cap growth stocks, while most of the rest of the stocks in the market struggle to find a bull trend. This was supported by the extremely low reading in the volatility Index (VIX), however the last few days of weakness has caused a slight lift to volatility. We think that the situation is not likely to clear up over the next few weeks with most of the indexes signaling the start of a mini- corrective move. At this time, we are leaning more towards the possibility of a short-term corrective move of 3% to 5% rather than a meaningful move to the upside from here. 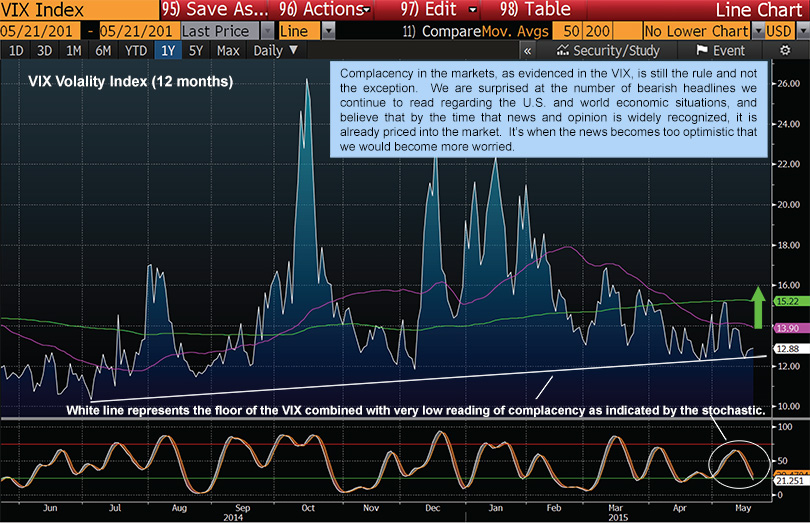 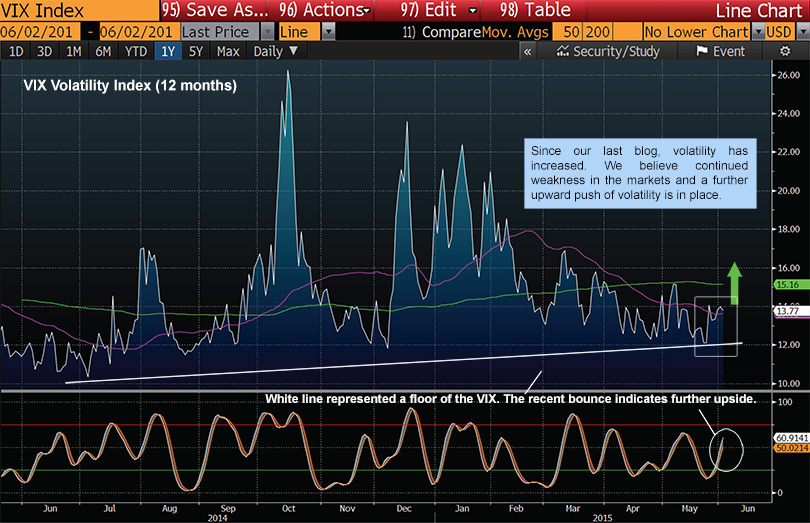 TRADING UPDATE: Diminished or lack of global growth could derail generally bullish (mixed) US fundamentals. This may contribute to increased headline volatility that is difficult (if not impossible) to anticipate as to when it may occur with either fundamental or technical analysis. We have stopped buying equities at this time with no compelling reason to be fully invested. This market was being forced higher and we were moving in unison with the rally. However, we are becoming increasingly cautious in the short-term (days to weeks) and will look for anything that could derail the current trend. We have continued to increase our counter-trend downside hedge in the portfolios and will stand ready to increase the exposure if we see the markets weaken quickly. This would give us a more favorable area to enter the markets. After we get through this short-term phase we anticipate getting fully invested. Intermediate term (weeks to months) and long-term (months to years) we remain bullish as we are in a long-term secular bull phase. Until then, we continue to remain diligent in our research and will continually monitor the markets and report back as data becomes available.