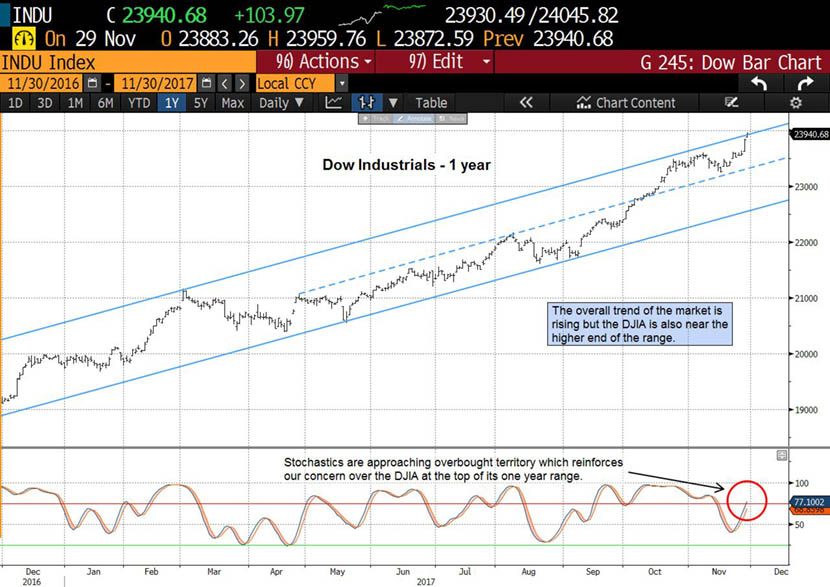 Top of the Range

MARKETS: The major stock indexes continue to move higher in their rising channels, but are also at the higher end of those channels, which may be a limiting factor to their short-term potential from here. But it is also interesting how the stock market continues to be strong despite the frequent articles and opinions that are being expressed about a potential correction after the market has been so strong for such a long period. This is a sign that the general sentiment may have more room for improvement until it reaches a higher level of optimism, which we think is mostly true on a longer-term basis. The short-term market is extended, however, and we would not be altering an overall investment plan by “chasing” the types of investments and stocks that appear to be becoming too popular. 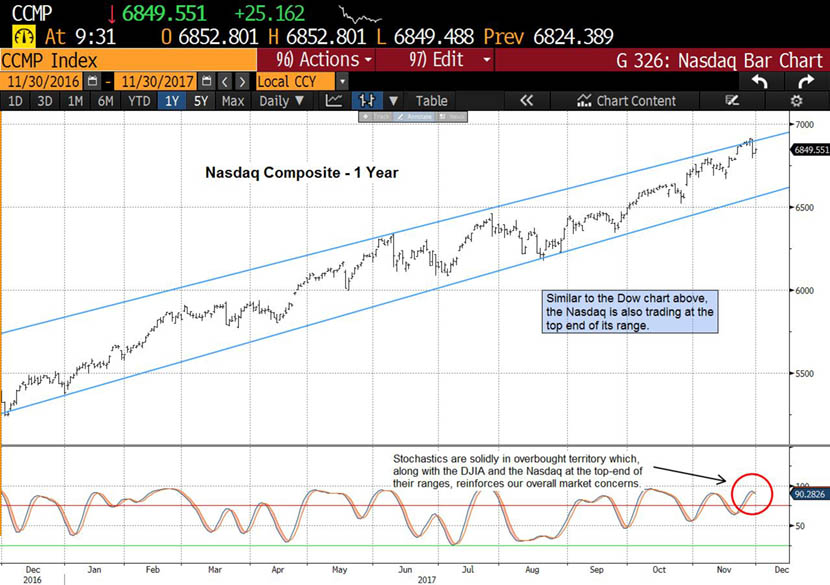 The Nasdaq Index is showing much the same pattern at the DJIA. The market continues to defy the expectations of a correction as the indexes bounced back in a big way following a few days of softness. We believe there are many indications of potential market weakness from both a technical and fundamental viewpoint, and these indicators are obvious to many and are pointed out in the media on a daily basis. And yet, the indexes refuse to budge lower by more than a couple percent. This wide recognition and expectation could be part of the reason why the markets continue to trade high, because by the time an opinion becomes widely accepted, it is often already priced into the market. This also suggests that when a correction finally materializes, it could look quite different than most are predicting. In the meantime, there is a type of rotational correction that is already occurring in the market, while the larger stocks that have more influence on the indexes remain high in their ranges. This diversity in performance between various stocks and groups is the current market theme, in our opinion. 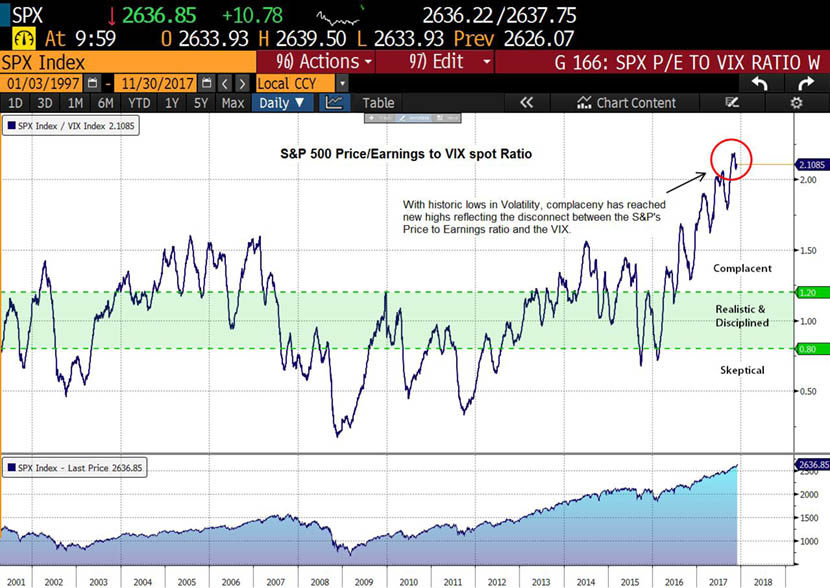 The recent increase in volatility has caused the Complacency Index to come off of its historic highs. In order to be significant though, we would need to see the index break its trend of higher-highs and higher-lows. This continued complacency of rising valuations (P/E ratios) and falling volatility suggests that a market pullback is likely or at least a pause. It is a modest move relative to the overall market performance recently, however the markets need to continue to rein in this complacency in order to maintain healthy market balance. 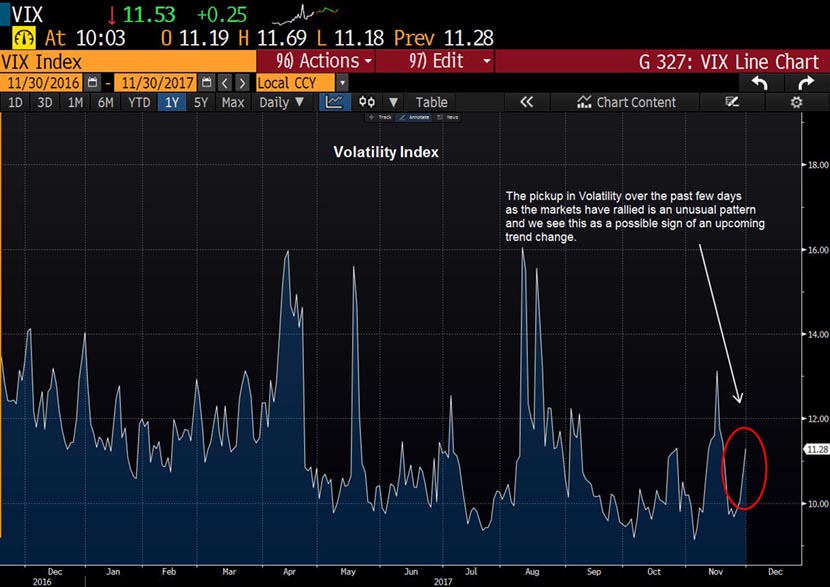 VOLATILITY (VIX): Volatility, as measured by the VIX, is a statistical measure of the dispersion of returns for the S&P 500 index. Sometimes it’s important to remember that some of the biggest moves in a trend come at the end of a trend, and it may be best to watch how things unfold rather than succumbing to the “Fear of Missing Out” that often occurs after the market has made a strong move to the upside. We see the recent pick-up in volatility as a possible sign of a trend change rather than a signal to get more bullish, which goes along with our opinion to be more conservative when markets are high and more aggressive when they are low in their ranges. The recent strength in the averages paired with a spike in volatility, does not convince us that this strength may be the start of an uptrend, but is more of a warning to perhaps expect some further unusual market action in the sessions ahead. 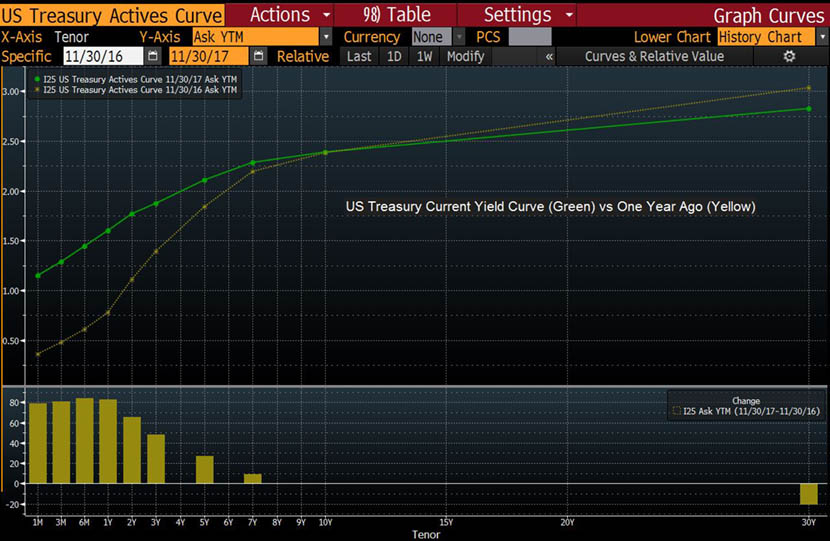 YIELD CURVE. The difference in the longer- and shorter-term interest rates has been narrowing for the past three years, and as it has, the fears of a potential recession have increased among followers of the yield curve indicator. The recent trend of the yield curve has seen it flatten to a difference of less than 1% between the 2-year Treasury note and the 10-year Treasury bond, which is causing a stir, because when the yield curve has inverted to a negative reading in the past, this has often meant trouble for the economy and the stock market. Today’s low yield curve reading and falling trend may be causing alarm for some, but it does not necessarily mean the economy may be slowing anytime soon, but it could encourage the Fed not to raise short-term rates at these levels. So, just because the yield curve may be flat and low, it may not bode poorly for stocks, but if it were to go negative, that risk would likely increase, in our opinion.

SHORT-TERM (Days to Weeks): Toppy. The market indexes have been making new highs on many of the days over the past month, but the technical quality of the advance has been weakening by many measures. The daily advance-decline numbers have been lagging the market, which illustrates that the advance is being led by fewer stocks, which historically has been an indication that a general market correction could be developing. A related statistic is that the number of stocks that are making new highs has also been declining during a time that the Dow Industrials and the S&P have advanced.

INTERMEDIATE-TERM (Weeks to Months): Neutral/Bullish. The market trend has been bullish for the past two years since the last major correction low of February 2016. That ended the most recent correction that was greater than 10%, with the pullbacks since being 2%-4% in an advance that has been steady and long-lasting. The support levels for this two-year advance are about 8% lower for the DJIA and the S&P, which still fits into the overall bullish trend, and separate where a modest correction would become a more meaningful decline.

LONG-TERM (Months to Years): Bullish. The Dow Industrials and the S&P have been in bull markets since 2009, and they continue to trade in rising channels that we think imply further gains for possibly many more years. We continue to believe that the U.S. stock market is still early in a longer-term secular bull market that we expect to rise until the sentiment of investors and the public becomes much more optimistic about the future, which could take many more years to develop. The theme of the bull market has been that of a changing group rotation where different market sectors and groups do better, or worse, at various times, and we expect that kind of cycle to continue, with the current trend favoring growth over value, and large-cap over smaller companies. It is usually not until much later in the long-term cycle until most groups and stocks are in bullish trends, so a long-term holder of a diversified portfolio can expect to see this continued varied performance between different stock groups for possibly several more years, in our opinion.

TRADING UPDATE: Given the trading range in the markets, our overall trading strategy of holding an above-average allocation in cash and exercising patience has changed little over the past few months. Using a bottom-up approach to security selection, we are looking to take advantage of shorter term equity rotation opportunities as they present themselves while keeping cash on the sidelines. The excess cash can be put to work quickly should we see further opportunities present themselves. Until then we remain diligent in our research and will continually monitor the markets.