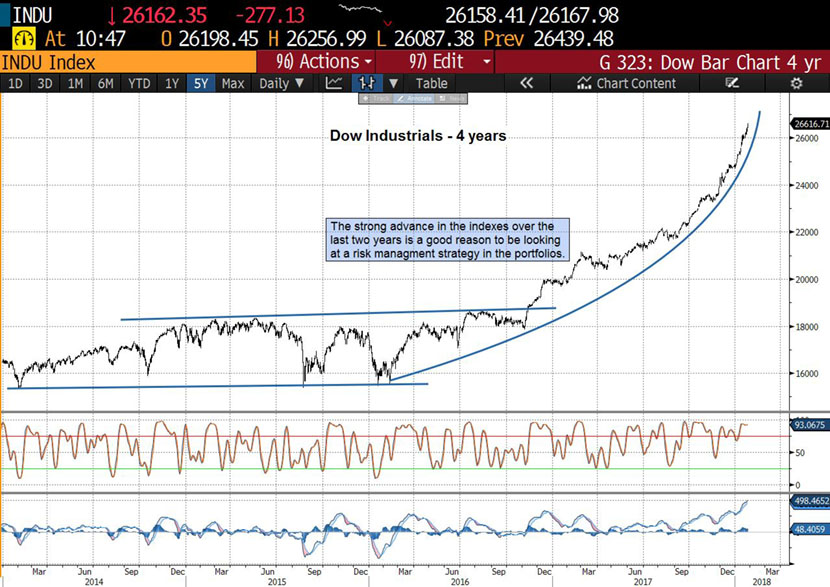 MARKETS: The stock market indexes continue to move strongly into new high ground, setting records in a near-parabolic trend, and with that, some investors are becoming more worried about the inevitable correction. When we examine past rallies, uptrends, and bull markets, we see the usual pattern of a top as being a drawn-out affair that takes time to complete in a period that can take months. It is normal for bullish enthusiasm to linger for a period of time, even if prices stall, which makes tops in stocks and the market more subtle than the bottoms which tend to be more climactic in nature. And so, if the market continues its strong upside momentum, we would say “not yet” to a top, but do see this move as leaving a lot of open space below where there is not much support within 10% or more of current levels. 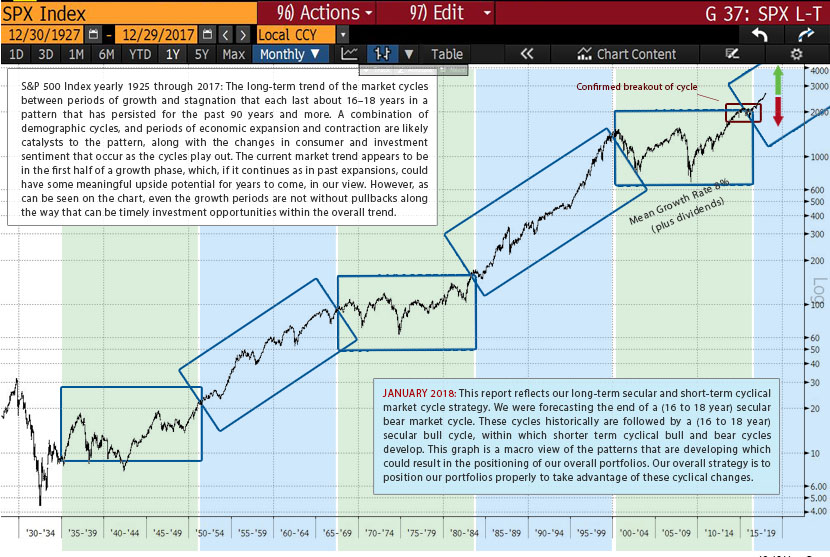 Markets move in cycles and now is a great time to plan for the next few years. These cycles repeat themselves and the market has broken out of the 16 year secular bear market. The stock market appears to have begun a longer-term secular bull market that may have many years of potentially positive results ahead.

However, past secular bull periods have not been straight-up affairs and tend to have many pullback periods that can keep the trend confusing for investors, but in time can become more obvious once the business cycle and the economic backdrop improve. For now, further gains in the market will continue to be met with a fair amount of skepticism and even pessimism. 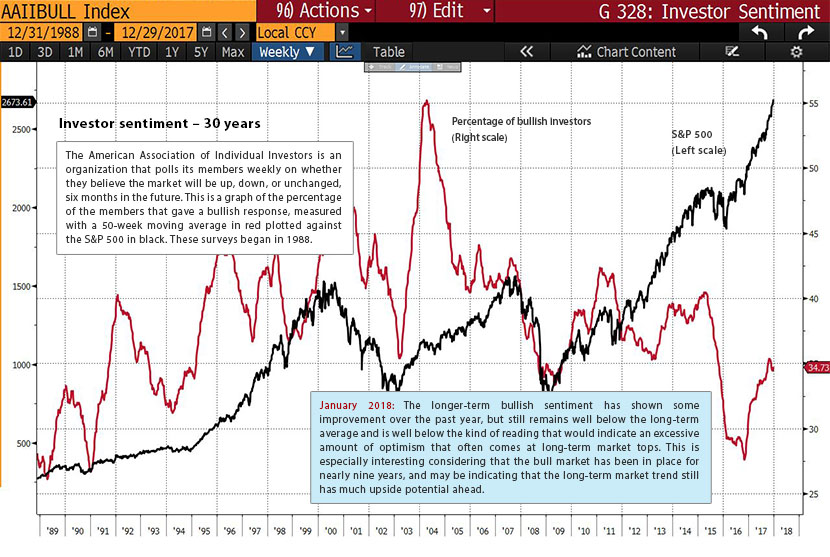 FACTORS THAT COULD END THE BULL MARKET: As the stock market is experiencing an incredibly strong run and a nearly uninterrupted string of positive days and weeks, we’d like to offer a list of near-term risks.

It is worth keeping an eye on these risks, but none of them seems imminent. Even if one or two materialized, market fundamentals remain solid. Equities have been benefiting from a near-perfect backdrop for corporate earnings and the recent tax bill has accelerated earnings prospects.

MARKET AND SECTOR CYCLES: The market cycle above has played out over a longer than normal eight year bull phase and will either continue on its growth trajectory or will finally roll over if the financial markets reset due to the concerns stated above. If momentum weakens, due to uncertainty and the weakening of internal market variables, markets tend to reset or revert to the mean. This market has continually advanced at a pace well above the mean for an extended period of time.

Our goal is to evaluate opportunities, be aware of systemic risks and prepared to take action in an effort to protect our portfolios through risk mitigation while seeking appreciation by careful deployment of capital in markets that may become increasingly chaotic in the years ahead.

We believe that the markets (and the FED) are complacent, and in our opinion, are in need of a reset. We feel it would be healthy if the market had a technical correction of -10% to -15% to take some of the froth (potential bubble) out of the market which could happen in the first quarter of 2018. If the market corrects and can withstand the FED’s adjustment to higher interest rates, we believe that the foundation of a continued bull cycle will remain in place. 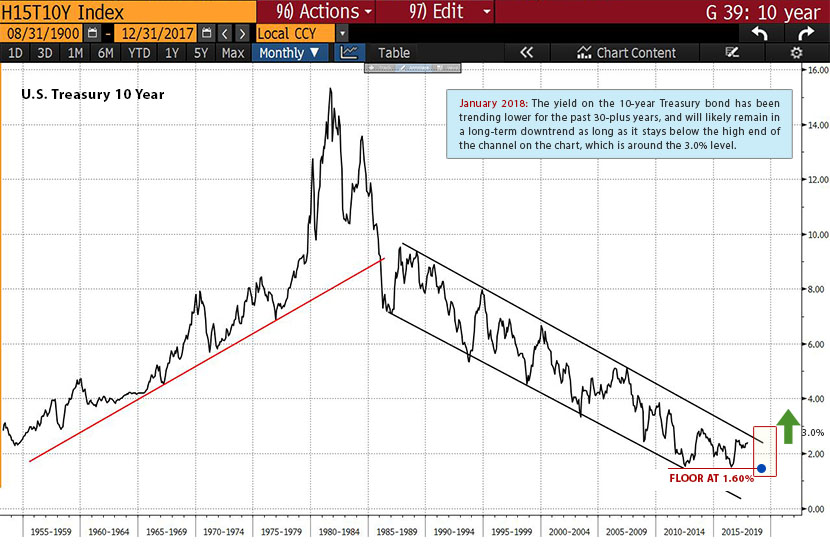 INTEREST RATES: The yield on the 10-year U.S. Treasury note has moved higher over the past few weeks and is near the highs we saw in late 2015 of around the 2.7% level. The previous peaks around 2.6% represented some significant resistance. On a charting basis, if the yield were to stay there for at least a few weeks, the likelihood of higher levels would be projected. A breakout would measure to the 3.0%–3.2% area on the chart, which is also the area where there is some longer-term resistance that goes back 20 years. 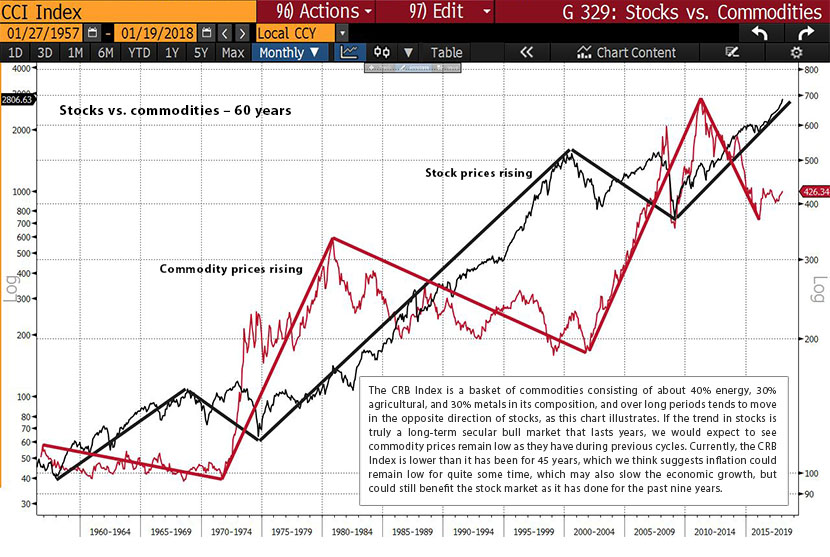 Short-Term (Six to twelve months): Extended. The record-setting strength we have seen in the markets over the past several weeks has left the markets in what we see as an extended and vulnerable position for a potential pullback over the near term. Regarding the Dow Jones Industrials, the current level of 26,200 is about 11% above the near-term support level for the index, which we measure from the rising trendline that runs across the previous lows for 2017. We consider this to be a normal pullback expectation for the index, and should not come as a surprise after the index gain of 25% last year. We believe there are numerous potential catalysts that could be reasons for the market to pull back, and that there are also many indicators of a technical or fundamental measure that would show that the index may be at a high valuation, but so far those indicators have proven to be premature.

Intermediate-Term (One to four years): Bullish. The markets were largely range-bound during 2014–2015, but over the past two years have been in an accelerating uptrend. It is normal for longer-term trends to have stronger rallies separated by consolidation periods that allow valuation measures to catch up to stock levels, and we may be approaching one of those consolidating ranges again. The Dow Industrials have advanced 60% up from the low of 2016, which is several times the long-term average for a two-year period, so we believe the New Year may see market that is more volatile, but also could be more neutral within a range.

Long-Term (Four to ten years): Bullish. The Dow Industrials and the S&P have been in bull markets since 2009, and they continue to trade in rising technical channels that we believe imply possible further gains for potentially many more years. We continue to think that the U.S. stock market is still early in a longer-term secular bull market that we expect to rise until the sentiment of investors and the public becomes much more optimistic about the future, which could still take many more years to develop. The theme of the bull market has been that of changing group rotation where different market sectors and groups do better, or worse, at various times, and we expect that kind of cycle to continue. It is usually not until much later in the long-term cycle when the market gets to the point where most groups and stocks are in bullish trends, so we think that a long-term holder of a diversified portfolio can expect to see the current trend of varied performance between different stock groups for possibly several more years.

TRADING UPDATE: The current market levels are keeping us in a defensive mode and reluctant to be taking aggressive positions in equities until after we see some kind of correction to a lower entry zone. Our overall trading strategy of holding an above-average allocation in cash and exercising patience has changed little over the past few months. The excess cash can be put to work quickly should we see further opportunities present themselves. Until then we remain diligent in our research and will continually monitor the markets.