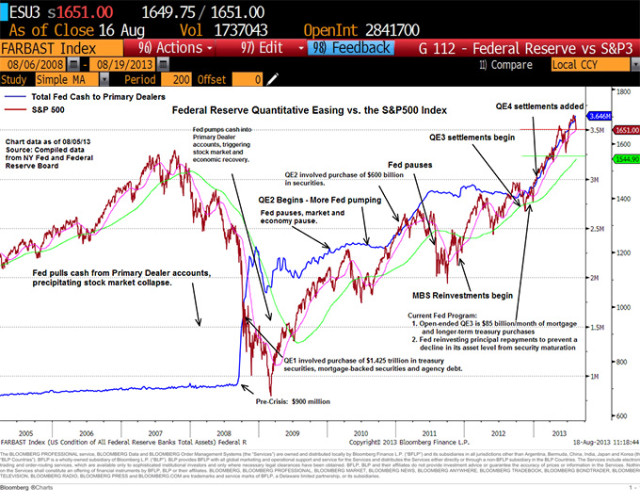 We are rapidly approaching the FOMC meeting and highly anticipated announcement (Wednesday, September 18th) to taper monetary stimulus from quantitative easing, resize it or do nothing at all. The market via bond yields have already begun discounting expectations with an increase in the US Treasury 10 year yields rising nearly 100% (1.5% TO 3%) in the past few months since Bernanke first uttered a potential withdrawal (taper) of free money. Now to put it in perspective, this “100%” rise in rates is more mathematical bewilderment than a comparative analysis of current market rates vs. a historical perspective. The talking heads and other financial gurus have synthesized their collective reasoning on whether the economy is improving or in an upward trajectory, flat lining or stagnating, on life support due to monetary stimulus or a host of other excuses inclusive of the recent geo-political events raging in the ever tumultuous Middle-East (Syria). What we will discuss today is simply the cost benefit analysis of continuing quantitative easing.

Let’s start with a basic formula for the financial sector and their potential gain from continuing Quantitative Easing Infinity (QE∞) vs. exciting altogether (QExit). It is:

The total negative equity of home mortgage values is now estimated to be $913B (Zillow) and the percentage of negative equity homes has dropped to 23.8% from 30.9% in the past year. Four states (California, Florida, Nevada and Arizona) represents one-third of the entire negative equity. The furtherance of recovering equally incremental gains in negative equity is unlikely and would be the equivalent of owning an out of the money call option on QE.

Business and Consumer expenditures are largely responsive to economic conditions, either perceived or actual. If the markets are pricing in recession or depression conditions (i.e. late 2008 through spring of 2009), the Fed can successfully dissuade these notions with monetary stimulus. From an aggregate demand point of view, expenditures can be divided into consumer spending, investments, government spending and net exports. By and large, the Fed can influence the expansion or contraction of these expenditures through increasing or decreasing the credit channel. To say the least, the Fed’s spigot has been fully open with QE∞. Unfortunately, in a balance sheet recession like we have experienced, consumers are no longer willing to borrow or banks willing to lend so demand remains anemic and thus dampens the enthusiasm for business to spend (hire, etc.). Although residential spending has seen an impressive rebound over the past couple years, it doesn’t seem advisable to build an economic recovery on real estate again. Fiscal policy via monetary stimulus is no longer incrementally expansionary. The Federal Advisory Council in May of 2013 concludes that the effectiveness of QE on general business conditions has become increasingly questionable.

The reversal of QE would potentially precipitate large losses in equity portfolios. If interest rate normalization is deemed to be inevitable then losses from QExit will be equally unavoidable. The obvious strategy would be to minimize exposure prior to rates rising further.

The high level of financial activity (M&A’s, LBO’s, IPO’s) measured by the issuance volume as a proxy, increases profits for only those few banks with an investment banking division and NOT the financial community at large. Therefore, continuing QE has only a narrow thread of buoyancy with little dispersion capabilities beyond Wall Street. We will concede though that this “narrow thread” has disproportionate political influences and we are about to see this with Obama’s successor candidate to become the next Fed Chairperson.

Finally, and perhaps most importantly, with low risk free rates and tight spreads across different credit qualities and instruments, interest rates earned on debt is disproportionately low versus the implied risk of rising interest rates. The potential for very large losses across the debt spectrum is on the visible horizon. Hedging against this contingency is simply unhedgeable. Assume a $1T (trillion) debt portfolio with a duration of 10 years; a 2% increase in the risk free rates plus a 1% increase in risk premia would equate to 3% yield increase. A 3% increase in yield on a bond portfolio with duration of 10 years would result in a 30% decrease in the market value of the bond portfolio. This is not an unlikely current scenario for institutional investors. A 30% decrease in the portfolio value would represent a $300B current loss … there are not many, if any, contra parties that are capable of absorbing a $300B hit to equity. The longer that QE is extended, the more debt issued at artificially low rates that can’t be hedged will eventually lose money proportional to the length of QE once rates normalize. The chart above depicts the constant maturity rate of the US 10 year Treasury bond over the past fifty years. The coupon rate of this bond affects most of the debt issuance worldwide, especially housing related. As you can see, the historic average of the US 10 year Treasury is approximately between 5 – 6%. Therefore, a mean regression of 2% increase in yield from the current 2.5 – 3% level of today remains a highly probable.

In conclusion, the game has changed, perhaps considerably. The Fed and banks no longer are focused on propping up asset prices and may switch their emphasis to preventing new debt going forward from suffering major devaluations that are intrinsically unhedgeable. This is why we feel QE will end. Going back to the original equation;

Incremental gains are marginal for mortgage value gains and business consumer value gains relative to the huge potential losses from securities held and the issuance of new debt. The costs of continued QE largely exceed the benefits. Ignore the lackluster employment gains depicted as improving or economic growth ranging between moderate to modest. We have warned (over the last few years) about asset bubbles being created from the Fed’s QE programs. Now there is actual strong demand from industry to end QE.

We remain extremely cautious with the way we are positioned in our portfolios. Recently, (over the past 4 trading days) we have seen the markets begin to rally in the face of all this uncertainty which has caused us to remove our 12% short position. With all of these headwinds we will remain defensive with a 20% cash position. Until, we get some stability with respect to the middle east and more importantly the FED’s position we will maintain our strategy.