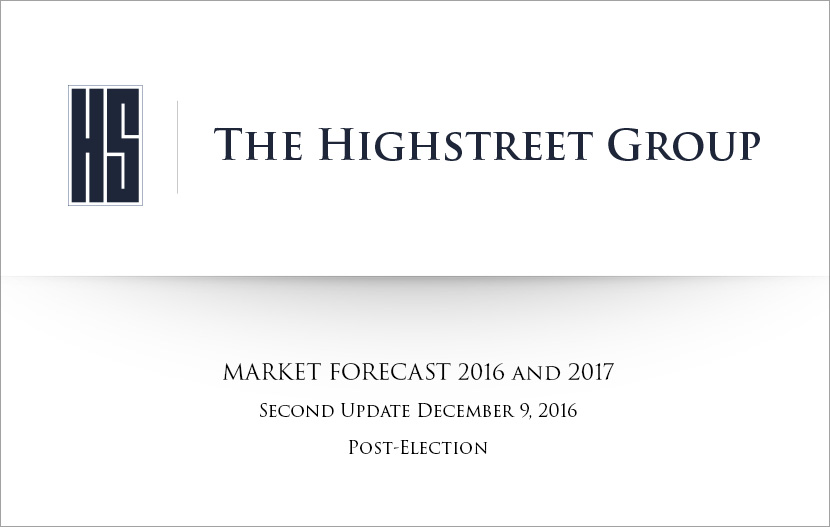 EQUITIES: The recent sharp moves by some stock groups may have been caused by a reaction to the news and opinions regarding potential changes in the post-election future, although the extent of any anticipated changes, and whether they even happen, is still far from clear. However, the market’s reaction was that of selling technology and buying economically sensitive sectors combined with money leaving bonds and entering back into equities. The result, a good number of stocks jumped up or dropped 10%+ on huge volume, which we believe is more of an indication of an emotional response to the news, and an anticipation that a growth related economy could ensue rather than a move based on clear fundamentals.

We could see some of the recently strong market groups cool off, while others that have sold off due to election fears could bounce back, as these more-sudden market moves have the tendency to move back toward where they started or what’s commonly referred to as a “reversion to the mean”. The chart below shows the pre-election sell off followed by the post-election rally. The Dow Jones has been stuck in a two sideways range. The markets needed something “different” to spark a trend change… the election might have down it however more time is needed to determine the proper asset allocation change to reposition for the next 2 to 5 years market cycle. 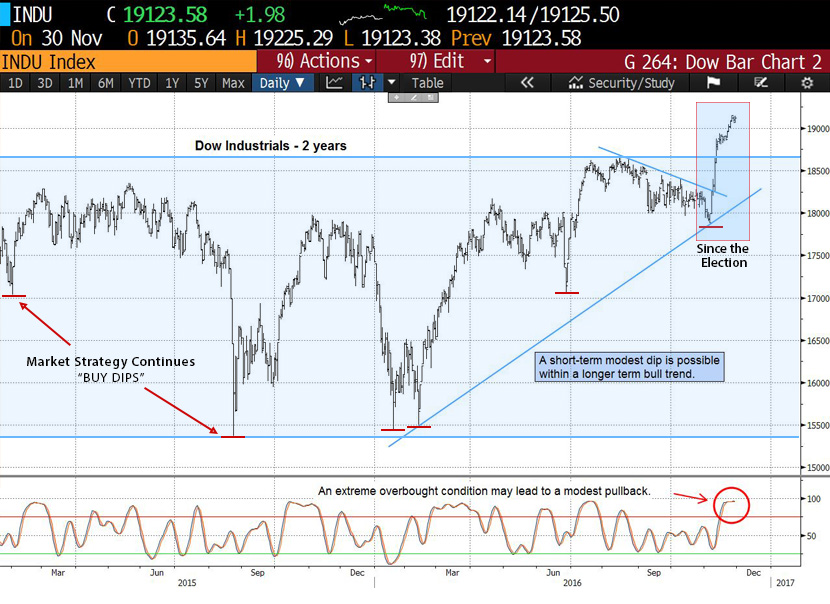 The theme of the stock market has been one of group rotation over the past few years, and now there is increasing evidence the stocks that have done well, or poorly, after the election may reverse a portion of their short-term trends. We suspect the recent rallies in the Financials and Infrastructure stocks will see some pullbacks, while the drops that were seen in the Tech and interest rate-sensitive stocks could see some bounces in the weeks ahead. We think the most important lesson is to not get pulled into any of these outsized moves after they have already happened, but instead use them to our advantage. The chart below is further indication of the asset allocation shift within the markets. They are tilting to the possibility of a new growth related bull phase. 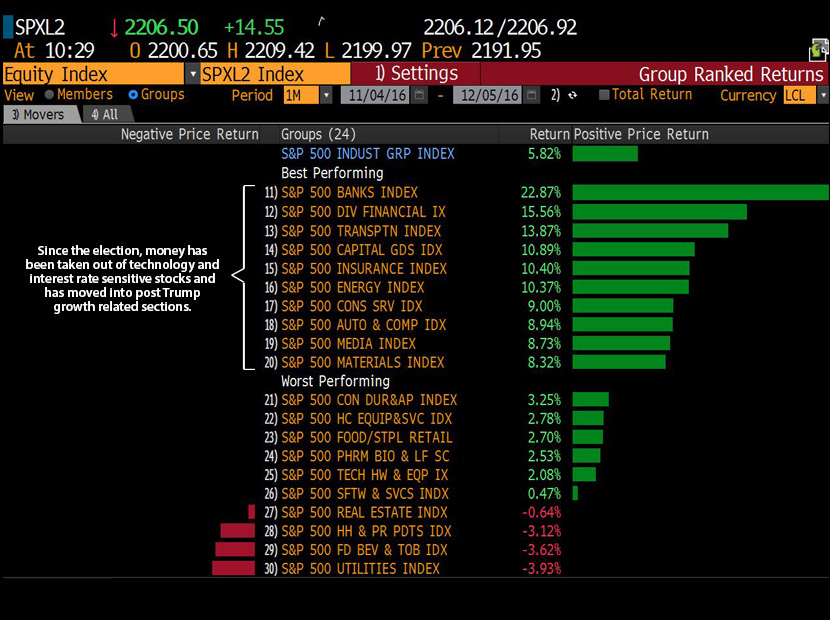 The stock market has been displaying remarkable strength in the face of the world-wide concerns about so many issues we are dealing with today. This is especially bullish when the market is making new highs while the sentiment remains doubtful. We view that as meaning there is still plenty of room for improvement in the opinions of investors, which then can translate into more market strength. The Thanksgiving week is traditionally a strong period for the market and this year was no exception. This is typically followed by a dip, and then an ensuing year-end rally. This year appears to be setting up to follow that historical pattern.

As mentioned in previous writings (chart below), the Wall Street professionals have been “Buying Dips” (adding money into the market on any sell off) over the last 6 to 7 years based on the fact that their confidence was backed by the FED and the massive money they made available to the markets combined with near zero interest rates.

With the current market reaction we feel that this dip buying will continue but for an entirely different reason. The professionals are now buying dips in anticipation of a new rally based on a growth economy which would be a much healthier scenario causing us to also get on board and be fully invested within our portfolios. 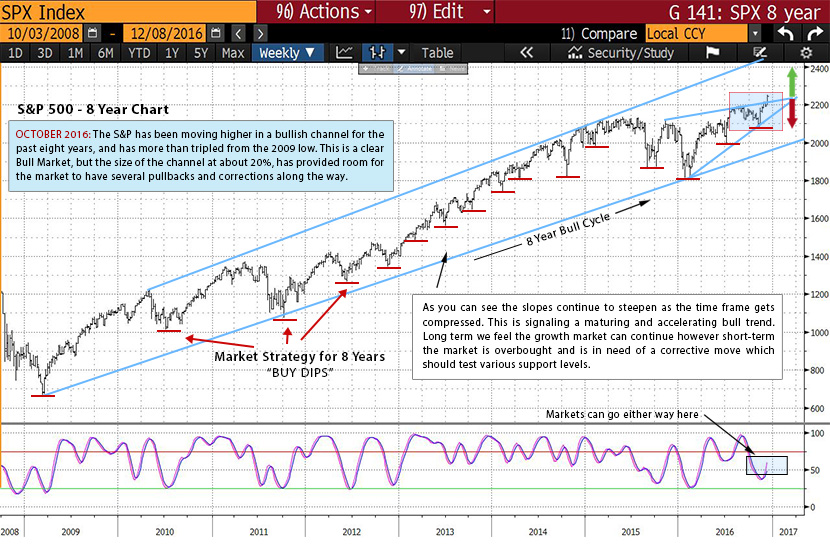 INTEREST RATES: In our last few writings we have talked about the possible short-term upward shift in the yield curve that was long overdue. The chart below shows the yield curve (interest rate) reaction to the post-election inflation expectations.

Typically, and again in a normalized yield curve structure, money that exits bonds typically find its way into equities furthering a bullish strategy to own stocks. That is exactly what is happening. 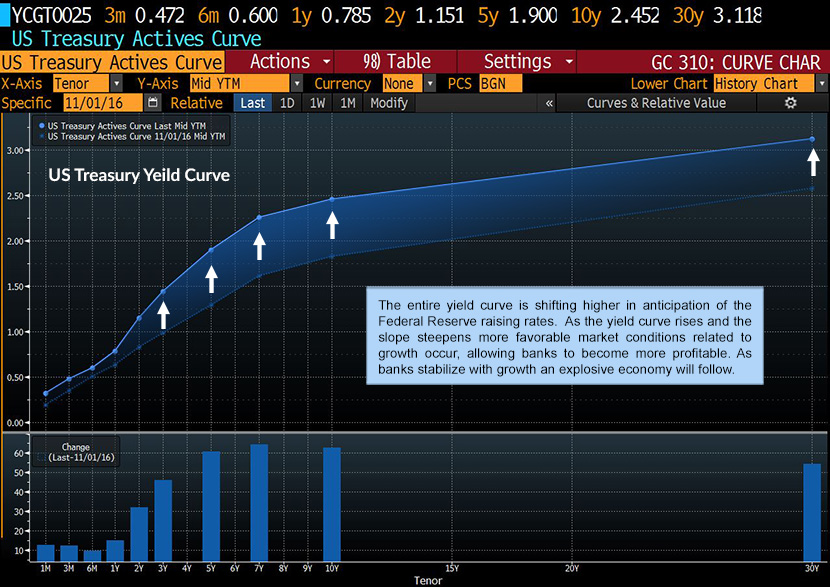 SUMMARY: During the month of December we will be evaluating the recent market reaction and will be formulation and updating our strategy for 2017. We will report our opinion and strategy in the next update. Enjoy the Holiday Season.