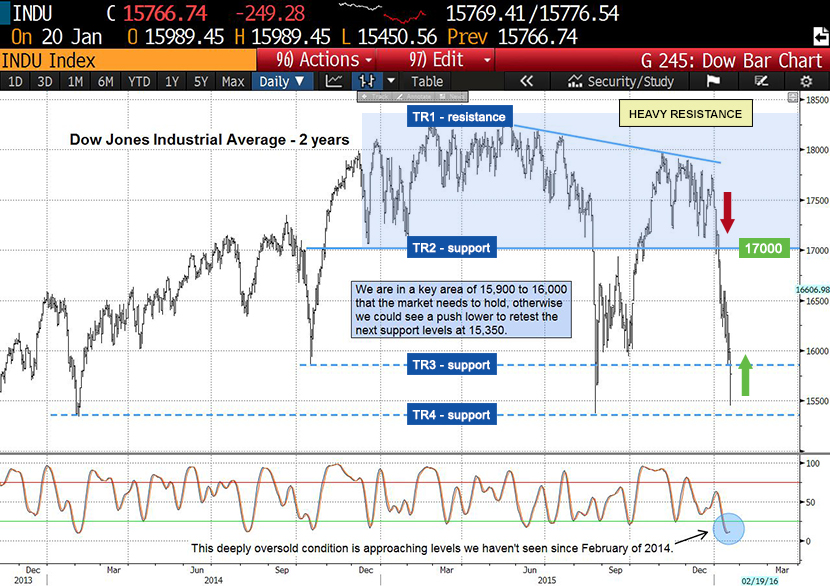 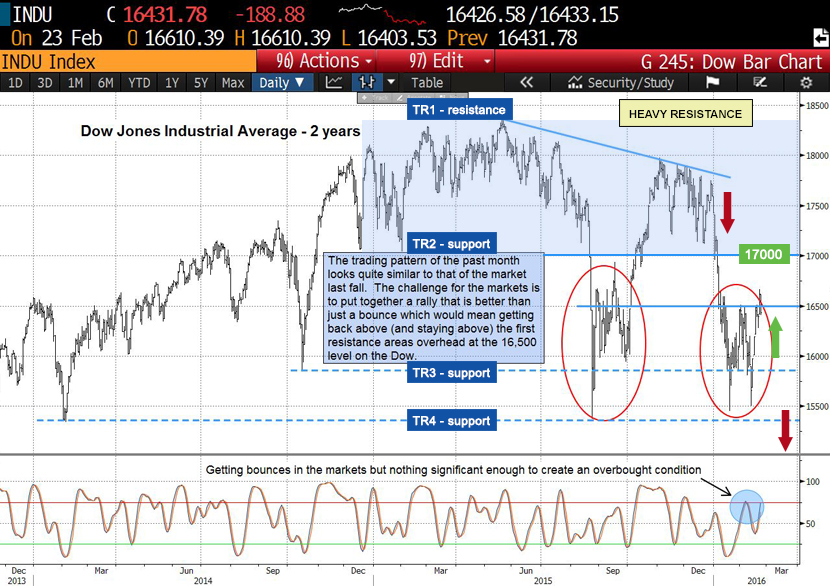 Markets Need More Than Just a Bounce
DOW JONES INDEX: To recap our January 21 Blog where we referenced the top graph. The markets failed to take out the trend line (labeled TR1 resistance) and then tested the lower trend line (labeled TR2 support) around 17,000. When the market violated the 17,000 support line it accelerated downward and started looking for the next support areas (labeled TR 3 support and TR4 support). This is where we are currently. We believe that the markets could finally find support between TR3 and TR4 and reverse the trend with a rally that could take us back to 17,000 at a minimum. We were beginning to put a small amount of cash to work and formulate new positions. However, we remain cautious until our upside momentum indicator confirms the reversal.

The second graph above shows that last week, the market indexes have had reversal days in which they began and traded weakly during the day, but closed much higher than the lows, which helps to reinforce the support and put in a possible short-term bottom. Now we think the challenge for the markets is to put together a rally that is better than just a bounce, which would mean getting back above (and staying above) the first resistance areas overhead at the 16,500 level on the Dow Industrials. While we had one day where we closed above that 16,500 level, it did not hold. There are many other resistance levels overhead besides this, but at least getting through and holding the initial barriers could potentially mean that the correction will be over. In addition, we need to see more stocks start to participate on the upside, because as investors know, the average stock has been struggling a lot more than the indexes during the past few months. So, there is much work to be done, but at least the market appears to be lined up for a possible bounce, though the quality of the bounce will be crucial.

With respect to the two red circles, we are concerned that a “head and shoulders” pattern could be developing and the result could be a new leg lower which will take out the lower support line TR4. This is a critical time for the markets as we would like to see the upside channel hold to maintain market stability. 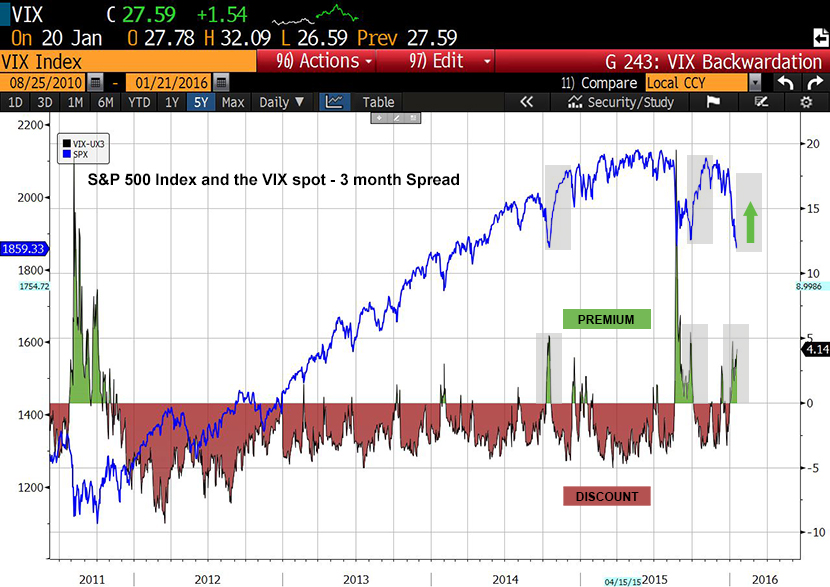 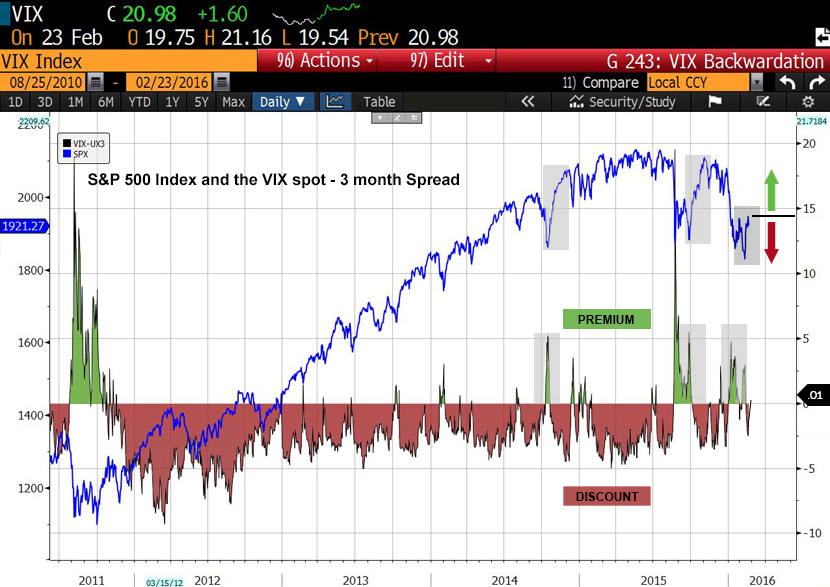 VIX INDEX: To recap our January 21 Blog where we referenced the above VIX top graph. This chart was the most compelling of the charts shown in the blog. It represents an overlay of the S&P 500 Index and the spread of the VIX spot (current) price minus the VIX 3 month futures price (as represented by the green and red shaded areas on the chart). It shows how rare it is for the current volatility to exceed the future expectation of volatility. This is called “Backwardation” and, when at extremes, can represent a near-term reversal in the equity markets. What’s compelling is that every time this VIX indicator showed a premium (shown in green) a short-term reflex rally ensued. We believe that, given the data shown above, the probability of a V-shaped rally was high and a rally ensued.

To reference the second VIX graph we are at an inflection point to see if the market will hold and continue its recent rally or begin its sell off again. It the market heads lower we will focus on this indicator to look for a bottom and/or a new V-shaped rally

TRADING UPDATE: We have continued with the rebalancing of the portfolios while not changing the overall cash weighting in the accounts. As mentioned in the past, we are not seeing clear indications of what areas of the market may lead in a recovery, so we continue with a bottom-up approach to security selection. The cash can be put to work quickly should we see opportunities present themselves and the potential for hedge positions will remain a trading tool to improve risk exposure in the portfolios.