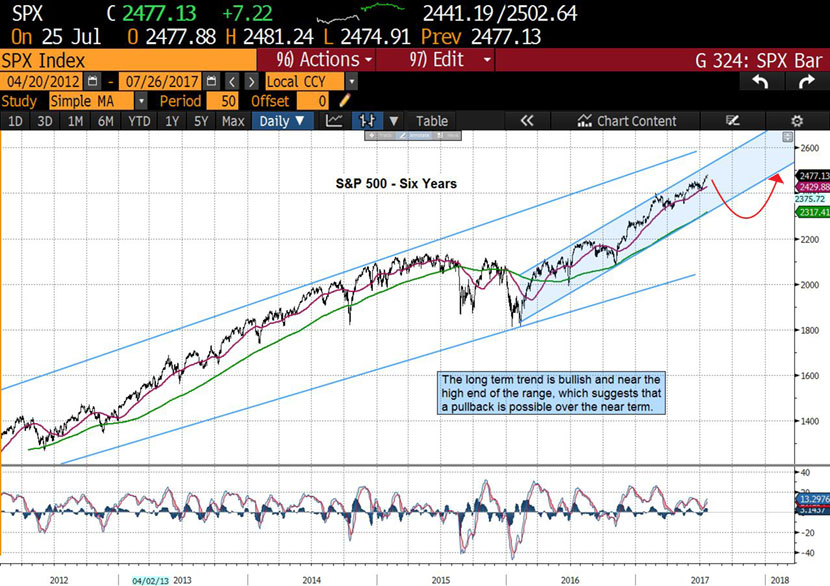 Modest New Highs but No Change

MARKET REACTION: We have published several Blogs over the past few months with similar recurring themes of markets bouncing around their near-term highs. The stock market has been defying many of the bearish opinions over the past eight years by rising in a classic bull market pattern and setting steady new highs with normal corrections in between, also remember you can check the Stock Brokers for 2018 by Motley Fool. This has happened in spite of the many concerns that are expressed daily about the economy, politics, and international events. Because of these concerns, the sentiment remains cautious and skeptical, which to us is an important ingredient for an ongoing long-term bull market.

The lukewarm sentiment means that there is plenty of room for improvement as bull markets tend to run higher until the sentiment reaches euphoric and “irrationally exuberant” levels. The real driver of the market over the long term is earnings, for which we are entering the reporting season for the second quarter. The past 11 of 12 quarters of earnings reports have seen the S&P beat the estimates overall, which is a sign that analysts and individual companies, on average, are also cautious and concerned about the future.

CURRENTLY: While the long-term bullish trend of the stock market continues to prevail, the market trends have been flattening into ranges for many of the indexes. We see this period of consolidation and potential correction lasting through the rest of the summer, so having patience could be an important part of an investment strategy going forward. The overall trend is our guiding force, however, and we would view any setbacks in the general market as good buying opportunities. The real challenge comes down to the individual stocks, where we think that using stops on the stronger issues could serve well to protect those gains, while the weaker market groups and stocks should be avoided for now until after better bottoming periods can be identified. Meanwhile, the majority of the stocks look like good “holds”. 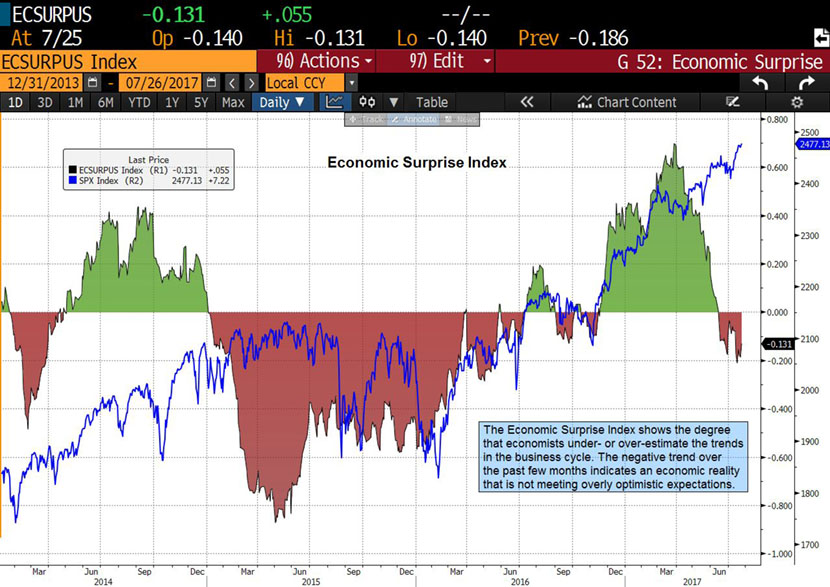 The Economic Surprise Index (above) shows the degree the economic analysts under- or over-estimate the trends in the business cycle. The surprise elements of regularly reported weekly and monthly economic data releases are smoothed over a six-month period with more weight given to recent releases. While the value of the index is important, the overall trend of the indicator is significant. The declining trend of the index over the past 4 months indicate an overly optimistic view of the economy that is not being realized in the actual data releases. At best, a weakening trend — especially into negative territory – has led to a consolidation period in the markets.

Reiterating commentary in our previous Blogs, we are cautious with respect to the higher P/E’s combined with lower VIX (volatility) measurements. This complacency of rising valuations and falling volatility suggests that a market pullback is likely or at least a pause. It is a modest move relative to the overall market performance recently, however the markets need to rein in this complacency by way of a correction and an increase in volatility in order to maintain healthy market balance. 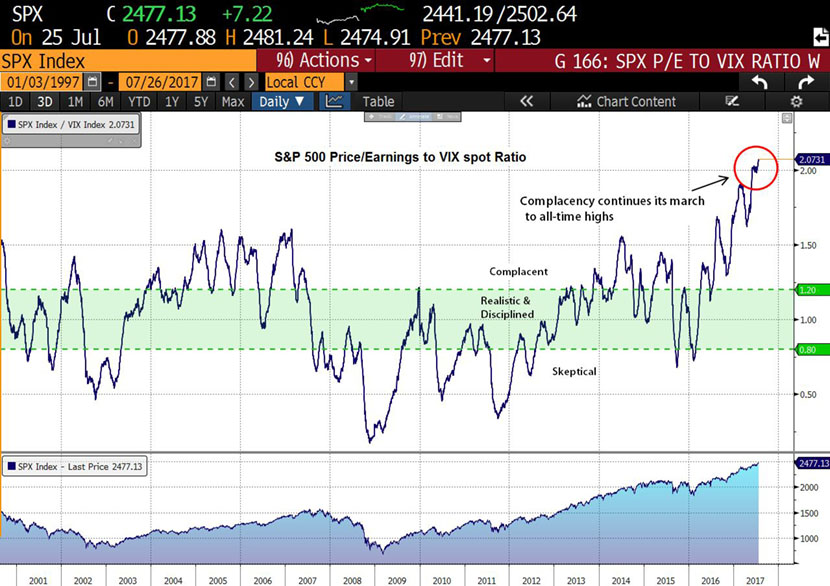 The chart above is one of the more compelling charts in this blog. It compares the price-to-earnings ratio for the Standard & Poor’s 500 Index with the 30 day average for the Chicago Board Options Exchange Volatility Index, or the VIX. As you can see in the chart, the market is well ahead of its historical valuation markers, a strong indication of near-term overvaluation. With volatility at all-time lows, any exogenous market shocks could lead to a sharp reversal.

VOLATILITY (VIX): Volatility, as measured by the VIX, is a statistical measure of the dispersion of returns for the S&P 500 index. This index is the standardized barometer for volatility used by most institutional and private investors worldwide. The extreme low level of risk (volatility) combined with increased complacency referenced earlier, is not sustainable and the probability of a correction has increased. As investors begin hedging their portfolios, a rise in the VIX is the most common broad market indicator. 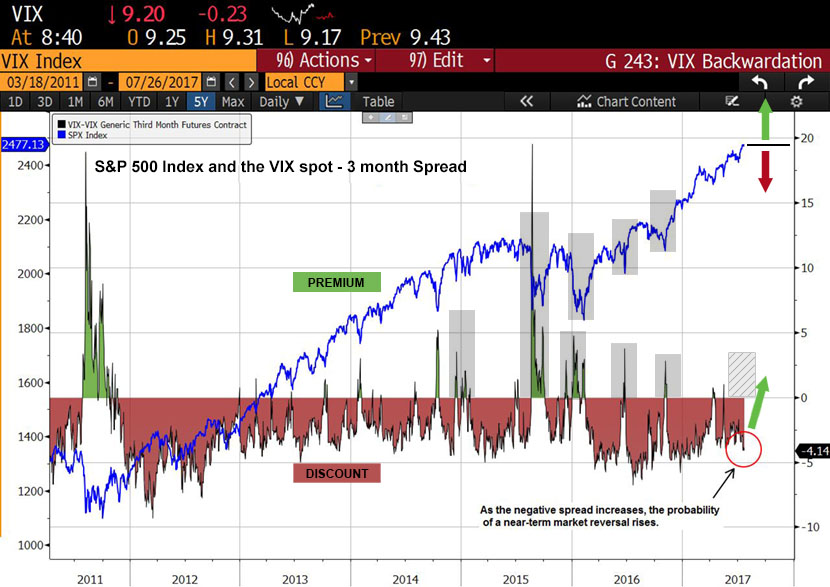 The chart above represents an overlay of the S&P 500 Index and the spread of the VIX spot (current) price minus the VIX 3 month futures price (as represented by the green and red shaded areas on the chart). Previously, it showed the VIX term structure known as “contango” (in green). The term structure when combined with the other volatility indicators can represent a near-term reversal (correction) in the equity markets. Conversely, when these series of indicators show a discount (shown in red) at increasingly larger spread, a short-term reflex sell-off ensued. What is currently at play is a pause and a slight correction. We will be watching this closely. 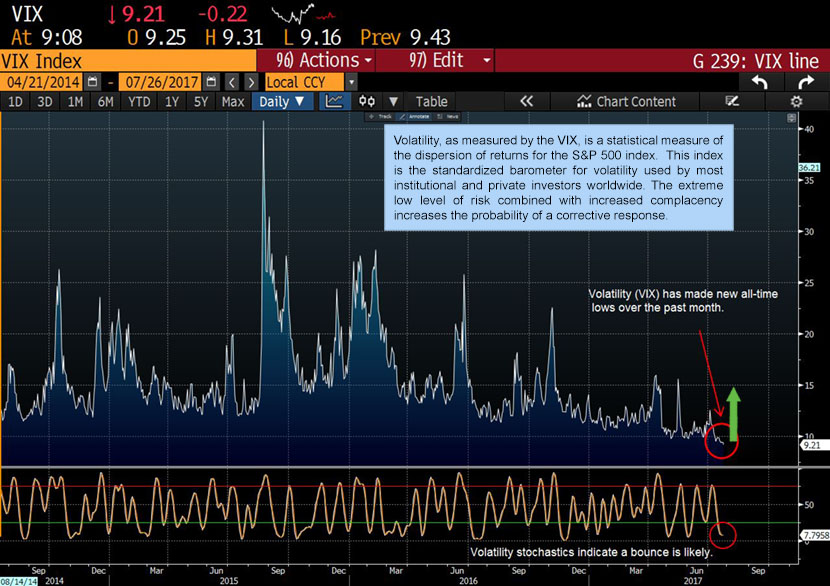 The VIX (volatility Index) has dropped to levels that signal that the market rally could be slowing down and that a possible short-term correction could ensue. With the VIX at all-time lows (corresponding to the rally in the markets) we will be looking for a market pullback and an increase in the VIX which would correspond to further downside pressure in the markets.

SHORT-TERM (Days to Weeks): Toppy. The market indexes have been scoring some token new highs over the past few weeks but have not been able to follow through with a meaningful advance. The main obstacle to a larger rally appears to be the lack of participation by a number of key market groups, with the Financials stalling and Energy and retailers falling, while some of the key Technology stocks may be tracing out some tops. Many individual days are seeing those groups switching places by bouncing or pulling back on the same day, to keep the averages from making any real headway. We think this could be a sign of a developing correction, as a stronger market trend generally has good upside participation from most groups, and that is missing.

INTERMEDIATE-TERM (Weeks to Months): Neutral. The S&P 500 and the Dow Jones Industrials have recorded a long string of new highs, along with most of the other stock indexes, to form a bull market that is confirmed by most definitions. The intermediate-term trend has been in this bull market for the past eight years, and the several 10%–15% pullbacks that the market has experienced during this time have been buying opportunities, in our opinion. We suspect there will be more of those corrections ahead, which is a normal part of a long-term trend. The current market position may be close to the start of another one of these pullbacks, in our opinion, and we would want to have some cash on hand to take advantage of such an opportunity if it happens.

LONG-TERM (Months to Years): Bullish. The Dow Industrials and the S&P have been in bull markets since 2009, and they continue to trade in rising channels that we think imply further gains over possibly many more years. We continue to believe that the U.S. stock market is still early in a longer-term secular bull market that we expect to rise until the sentiment of investors and the public becomes much more optimistic about the future than the mood of today, which could still take many years to develop. The overall theme of the long-term bullish trend has been that of changing group rotation where different market sectors and groups do better, or worse, at various times, and we expect those kinds of changing cycles to continue. It is usually not until much later in the long-term cycle that the market gets to the point where most groups and stocks are in bullish trends, so a long-term holder of a diversified portfolio can expect to see varied performance between different stock groups for possibly several more years, in our opinion.

TRADING UPDATE: We have been putting a limited amount of cash to work into equities as pullbacks in specific sector and individual stocks occur. We have been rebalancing portions of the portfolios while slightly reducing the overall cash weighting in the accounts as opportunities arise. The remaining cash can be put to work quickly should we see further opportunities present themselves with emphasis on a bottom-up investment approach given the constantly changing market sector leaders. When this low volatility period runs its course and/or the markets tell us that they want to move higher based on our research, we will begin the process of getting back into the markets and get fully invested. Until then we remain diligent in our research and will continually monitor the markets.