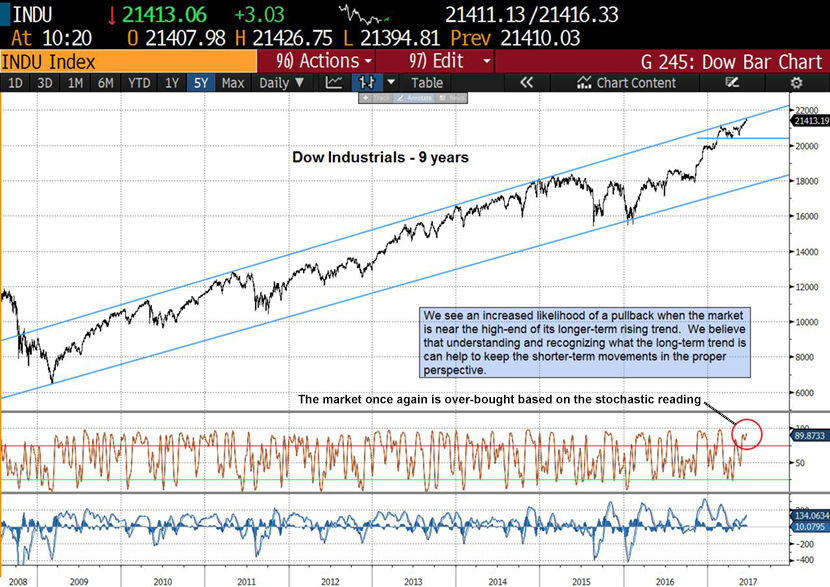 MARKET UPDATE: The major stock markets are up near the high end of their long-term rising channels, which could mean that the upside potential may be limited for the near term. Along with market indexes that are near their highs, come predictions for more of the same, along with other predictions of a big decline, and everything in between. We see the market as having long- and short-term trends and it is important to realize what the overall trend is and how the near-term possibilities fit into the big picture. We think that it is clear that the longer-term trend of the market is bullish and within that long-term trend, we believe the potential for pullbacks of up to 15% exists, but would still leave the market in a bullish trend. The problem with much of the commentary is that it does not make the distinction between the long- and short-term trends, as people seem to want a one-word solution to the market’s direction of either “up” or “down,” and it’s really more complicated than that.

The major indexes may be near their highs, but the individual stocks and groups are acting quite differently with some in bear trends of their own, while previous leaders, particularly in tech, also appear to be stumbling. This is how market corrections often begin, with a large divergence in stock performance that eventually affects the trend of the indexes. With the long-term cycle solidly bullish, we think that any correction will be relatively shallow and makes for a good general buying opportunity for many stocks. We believe it is important that one does not get caught up in the swings of sentiment that also come from these market cycles which may cause the wrong decisions to be made during these market moves. Something simple, like buying after a market correction, and being more conservative following strong market uptrends, can help to balance out the short-term moves in a portfolio, even within a longer-term bull market.