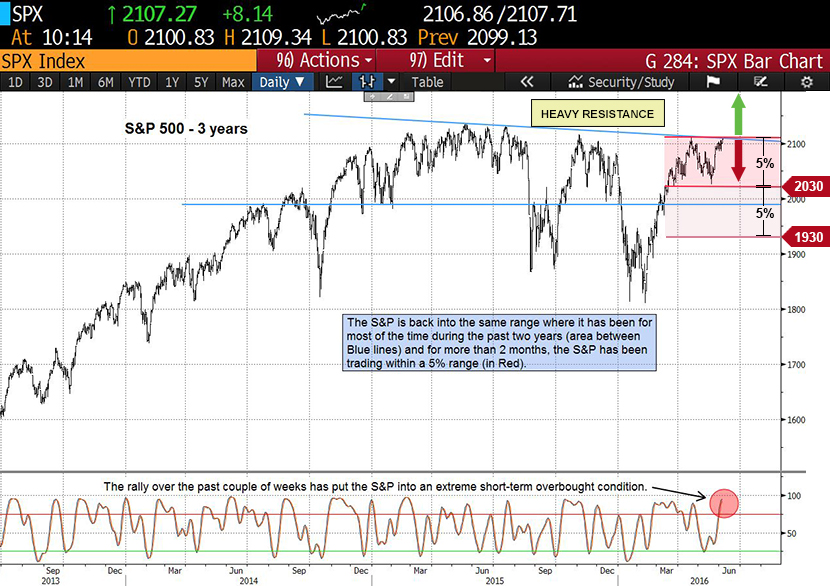 Markets are Holding Up Heading into Summer

S&P 500: The stock market is finding a high-end range as the S&P has been trading within a 5% range for more than two months. And while this kind of tight trading can be typical for the markets during the summer months, it is also impressive that the range is occurring after a big rally and is holding the gain rather than pulling back and correcting, at least so far.

We generally want to see at least two moves between the top and bottom of the range to officially call it a trading range. The usual expectation is that when a trading range is broken, in either direction, the security will most likely move the same amount of the width of the trading range in the direction of the breakout. The low end of the range is around 2030 for the S&P which is the short-term number that must hold, or another 5% of risk, down to the 1930 area could be possible. At this time, we see many indicators, stocks, and groups that are also in very mixed trends, which suggest that there could be more of the same range-bound market ahead. So, despite the interesting and potentially exciting current news, the stock market appears to be taking it all in stride with little in the way of a reaction in either direction for now.

VIX INDEX: We have been referencing the charts (shown below) over the past few blogs due to the accuracy in predicting general direction within the market. At times this indicator is relevant and looks to be coming back into play. It represents an overlay of the S&P 500 Index and the spread of the VIX spot (current) price minus the VIX 3 month futures price (as represented by the green and red shaded areas on the chart). It showed how rare it is for the current volatility to exceed the future expectation of volatility. This is called “Backwardation” and, when at extremes, can represent a near-term reversal in the equity markets. What’s compelling is that every time this VIX indicator showed a premium (shown in green) a short-term reflex rally ensued. Additionally, when the VIX indicator showed a discount (shown in red) for an extended period of time a short term reversal ensued. Couple this with several other overbought indicators and the probability of a market stall or pullback must be considered. 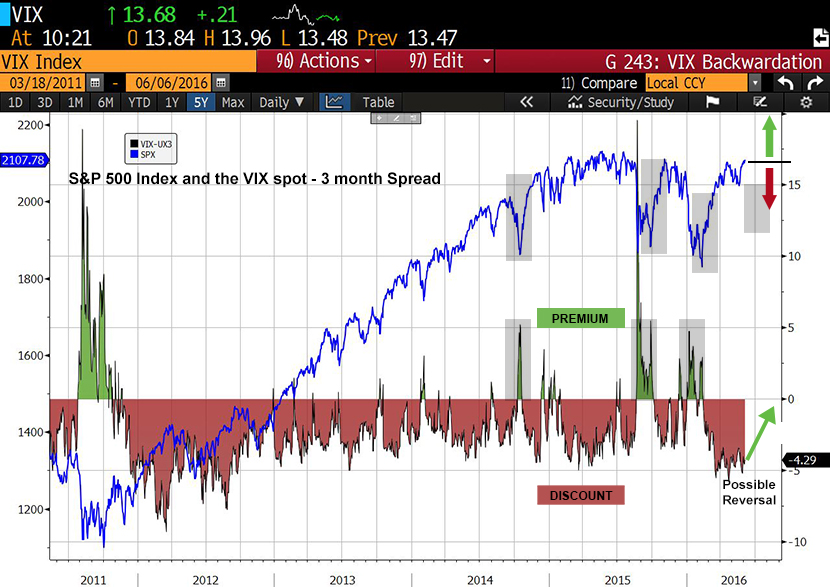 TRADING UPDATE: We have been reducing our cash position as the markets gained strength however we are still holding cash in reserve. The next market move either up are down will cause us to move to a more fully invested position. As always, the cash can be put to work quickly should we see opportunities present themselves and the potential for hedge positions will remain a trading tool to improve risk exposure in the portfolios.