Markets are Holding Up (2)
DOW JONES: The stock markets appear to be continuing their typical summertime meandering within a range, which includes some pullbacks that may look exciting when viewed under a microscope, but are all part of an overall trend of consolidation. The most dramatic moves we see in all markets are the persistent drops in interest rates, and the apparent short-term peak in energy, which we think will be the dominant financial news stories for the next few weeks. In the meantime, we think the stock markets appear to have some further modest risk ahead of them over the near term, but the heightened fear levels among investors, advisors, and the media read more like a bottom than a top, and imply that the risk may be much less than is being forecast by many. We remain comfortable with the expectation of a trading range of about 17,000–18,000 on the Dow Industrials for another month or two, with the bottom end of that range being about 5% lower than where the markets stand today.

The continued sentiment of uncertainty and general skepticism does allow room for improvement in the markets toward the end of summer, in our opinion. The main ingredient that appears to be lagging at this time is the volume for the market and individual stocks, which could be a function of the calendar and the traditionally lower volume during the summer months, but we do like to see evidence of more “volume fuel” that can help to drive prices higher. The Chart below shows the Market Volume’s 50 day moving average (yellow) compared to the Dow’s 50 day average (blue shaded area). It clearly shows the lack of conviction in the market with declining volume during the recent market rallies. 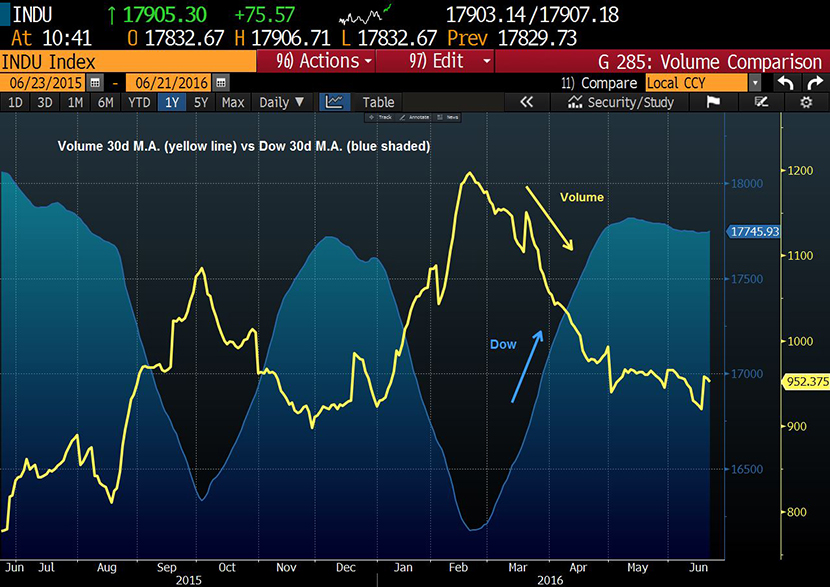 S&P 500: With respect to the S&P 500 shown in our Blog dated June 9 and titled “Markets are Holding Up Heading into Summer”, we see an overall correlation with the Dow Jones shown above. Below are the June 9 chart and June 22 chart of the S&P 500. 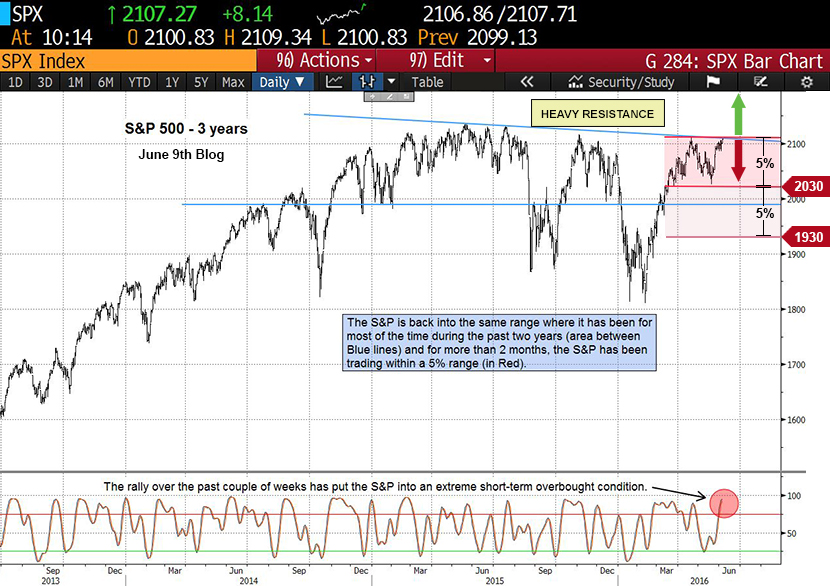 TRADING UPDATE: Given the trading range in the markets, our overall trading strategy of holding an above-average allocation in cash and exercising patience has changed little over the past few months. Using a bottom-up approach to security selection, we are taking advantage of shorter term equity investment opportunities as they present themselves while keeping cash on the sidelines.