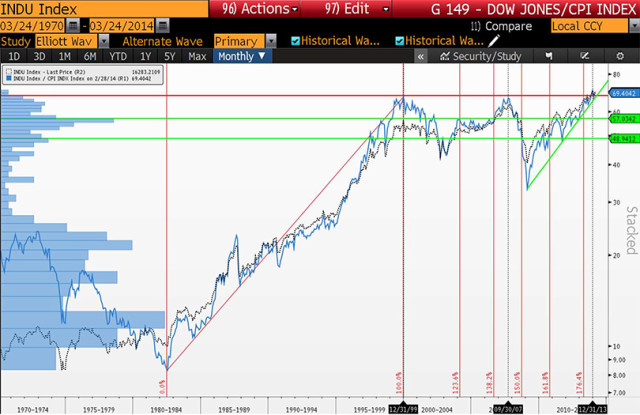 Dow Reaches New Highs, Possible Period of Distribution
The long-term chart of the Dow Jones Industrial Average has reached new highs – impressive considering the index was able to deliver these highs against a steady backdrop of global financial and political crises. However, a combination of cyclical analysis and other technical indicators suggests the index may now face a period of distribution.

The first chart above compares the Dow index (black dotted line) with its relative performance against the consumer price index (blue line) on a 33-year monthly chart. There is an important resistance level now established in the 68-69 area. This resistance level has twice been tested ahead of important crisis periods, December 2000 and October 2007, which preceded the dotcom bubble and subprime crisis respectively. While a confirmation of a breakout above this level might suggest considerable new highs from a long-term perspective (see our Secular Bull Phase in the Research section of our Blog), the 34 year cycle theory which says that a 17-year dormant period is followed by a 17 year period of intensity (again 16-18 year Secular Bull and Bear Cycles), suggests we remain within a period of distribution which projects to about December 2016. The chart defines these phases through Fibonacci-based time projections marked by the red vertical lines. The second chart above shows the Dow on a three-year weekly basis. Note that the price channel is losing momentum as the index has had difficulty reaching the same Fibonacci levels within the channel, 61.38 percent and 50 percent, which defined the beginning the channel. Important support is now around the 15,600 level. The three panels below the price chart show three different types of indicators, a market breadth Advance/Decline line (top panel), a volume indicator On Balance Volume (middle panel), and a momentum/ trend indicator MACD (bottom). The Advance/Decline and On Balance Volume Lines are both losing momentum and very close to support. Also, the MACD has been showing negative divergences from price since July of last year. A break of these support levels would suggest a correction is coming.

Over the past five months we have reported different points of view based on the volumes of data that we analyze, both from a Bull (market up) and a Bear (market down) perspective. Whenever the markets enter into an extended pattern of behavior that we feel is unrealistic we get very cautious and look for specific research that might give us insight to the direction of the markets. The first example would be when the markets collapsed in 2008. It was followed by consistently high volatility as the markets simply continued to fall with no base or bounce in sight. At that point in time we looked for data that would give us confidence with respect to the time frame of getting back into the market. We felt confident in March of 2009 and entered the markets. The second example is now. Over the last 5 months we have seen an unrealistic market shrug off all negative news (we refer to this as headwinds). Specifically, despite uncertainty with respect to the Fed’s tapering of quantitative easing, we watched the markets power higher with extremely low volatility. This is the opposite of 2009. Now we find ourselves at an inflection point that could lead to a correction of -10 to -15 percent or a period of consolidation which could be followed by the markets heading higher (we often refer to this as the next leg up). If the markets confirm our upside theory and they breakout (combined with the economy sustaining itself), we could see a very strong 5 to 7 year cyclical rally. We believe this scenario will play out but the question will be whether it comes from here or after a -10 to -15 percent correction.

With that said we continue to remain cautious with a slight upside bias in the portfolios. We are currently long equities, with a 12% protective hedge (Nasdaq and Russell double down short ETF) and 8% in cash.