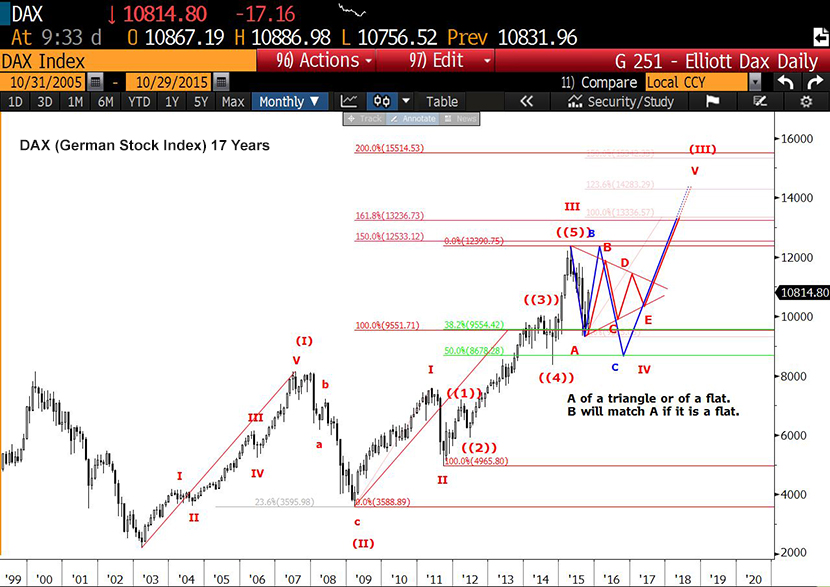 The five-wave move from 2003 to 2007, seen in the monthly chart at top, was followed by a textbook three-wave correction covering 76.4 percent of the previous advancement, confirming its status as a wave 1.

The structure that rose from the credit crunch bottom of 2009 can be counted as a I of (III) to the high of 2011, II of (III) to the 2011 lows and then an extended III of (III) into the recent April highs. Because wave II of (III) was a sharp correction, IV of (III) can be expected to be a sideways move, a flat or a triangle formation, according to the guideline of alternation found in Elliot wave analysis.

A triangle formation would suggest the low is already in place and we would expect progressively smaller moves, each in Fibonacci proportions of the previous move and never exceeding the previous highs or lows, until the completion of wave E and the move to new highs heralded by V of (III), a scenario shown in red on the above chart.

The development of a sideways correction in the form of a flat (a scenario outlined in blue), would suggest wave B of IV will retrace the whole of A of IV to create what is commonly called a double top, only for wave C of IV to develop into a Fibonacci multiple of A of IV and extend below the low of A of IV into the area already covered by ((4)) of III.

In either case, once the corrective wave IV of (III) is completed, the market will be ready for wave V of (III), taking prices to new highs, possibly in the range between 13,000 and 14,000. Note that the future projections are not to scale in time. This analysis does not forecast a time frame for future moves.

A look at the daily chart below suggests the counts going forward.

Elliot Wave analysis assumes a fractal structure of the market, with larger moves similar in shape, but not magnitude, to the smaller moves in the same part of the cycle. The internal breakdown of wave V of (III) will therefore have three impulsive waves – first, third and fifth – and two corrective ones – second and fourth. 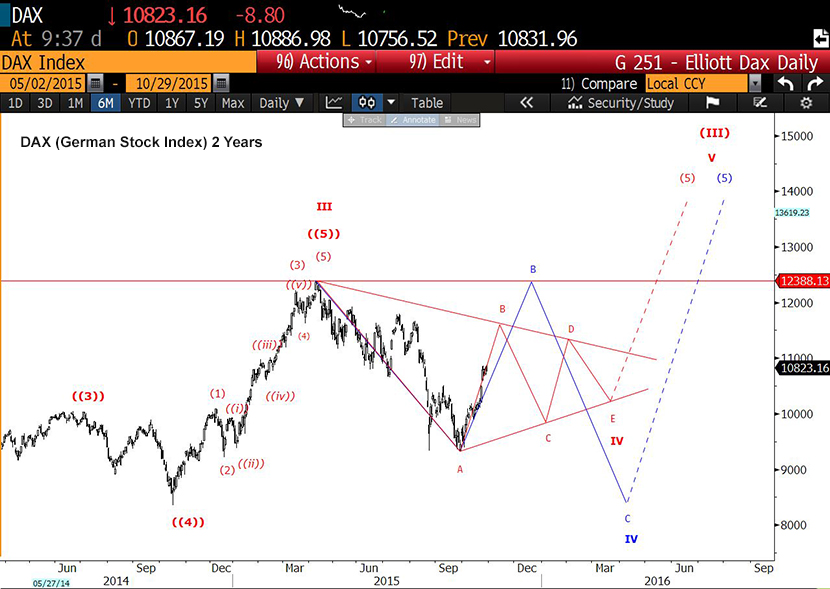 TRADING UPDATE: We like the probabilities of this pattern but remain cautious as a pullback in the US Equity Markets could derail an upside move in Europe. With that said, we will likely be trading this pattern with light to medium risk. We will keep you updated as the pattern develops.