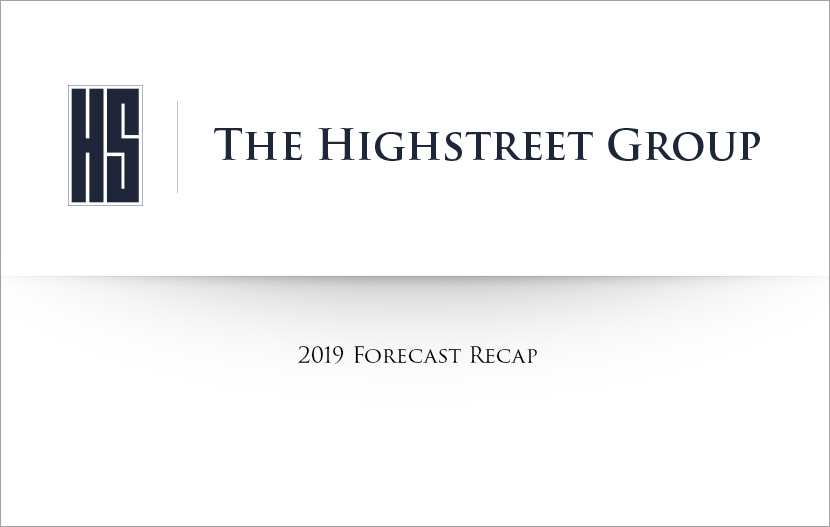 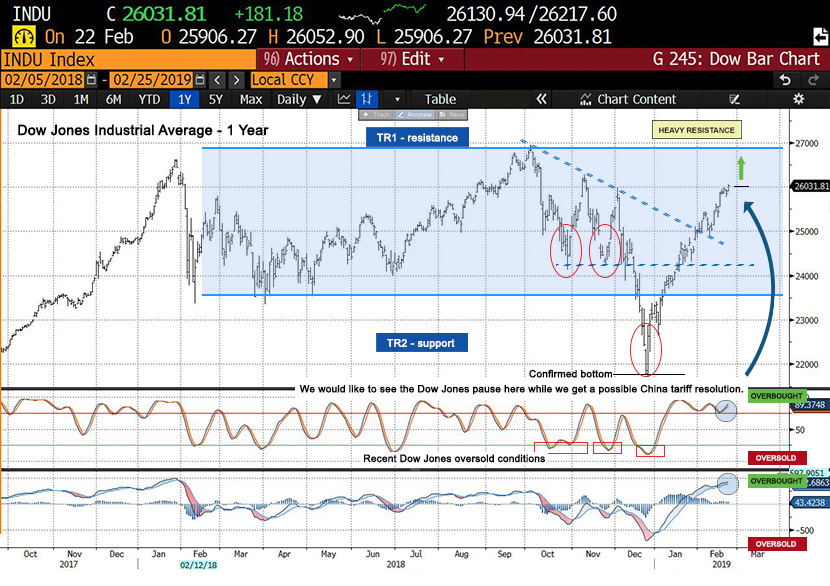 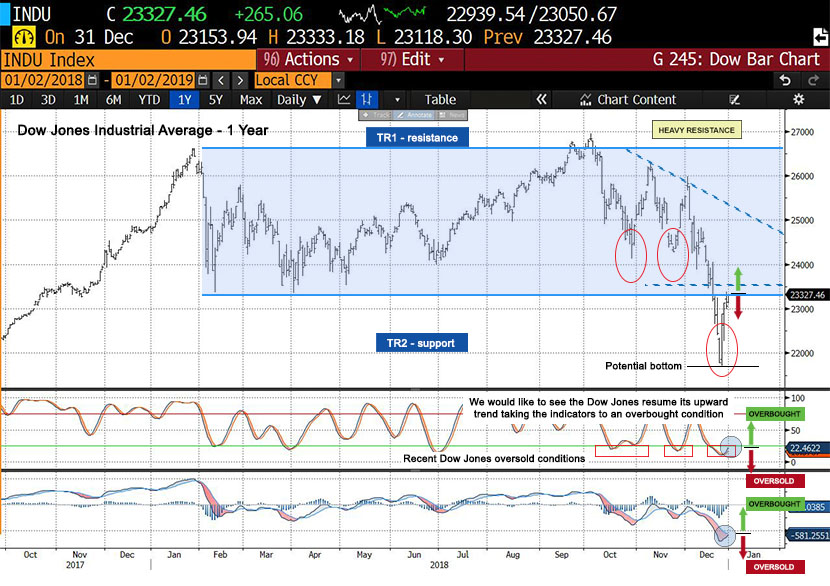 Market Reaction: The following is an UPDATE to our 2019 Market Forecast that was distributed in January. In that update we shared with you the January 2 graphs shown throughout this Update, relating to the technical behavior of the market and where we thought it would be heading at that time. The February 25 graphs provide an update of the market behavior over the last month.

Even though the markets are experiencing headwinds and a well-deserved normal correction in the 4th quarter, the foundation of the economy remains strong with respect to the full employment, strong corporate cash levels and still relatively low interest rates. We continue to believe that the probability of a retest of the highs within the next two quarters through June 2019 is rising. The biggest threat to the economy and markets are externalities such as a continued China trade war and Federal Reserve rate hikes, but we believe these threats will lessen in the coming weeks and months. 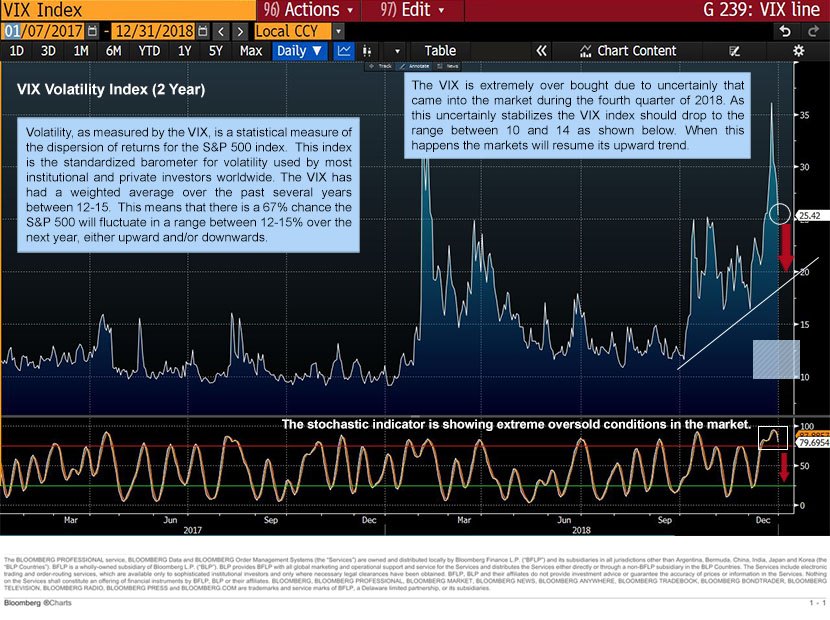 Volatility (VIX): Volatility, as measured by the VIX, is a statistical measure of the dispersion of returns for the S&P 500 index. Sometimes it’s important to remember that some of the biggest moves in a trend come at the end of a trend, and it may be best to watch how things unfold rather than succumbing to the “Fear of Missing Out” that often occurs after the market has made a strong move to the upside. In the prior update, we stated that we believe the recent pick-up in volatility, referenced in the January 2 chart above, is a possible sign of a near-term trend reversal. As you can see in the February 25 VIX chart, this came to fruition with a sharp drop in the VIX and a commensurate rally in equities. 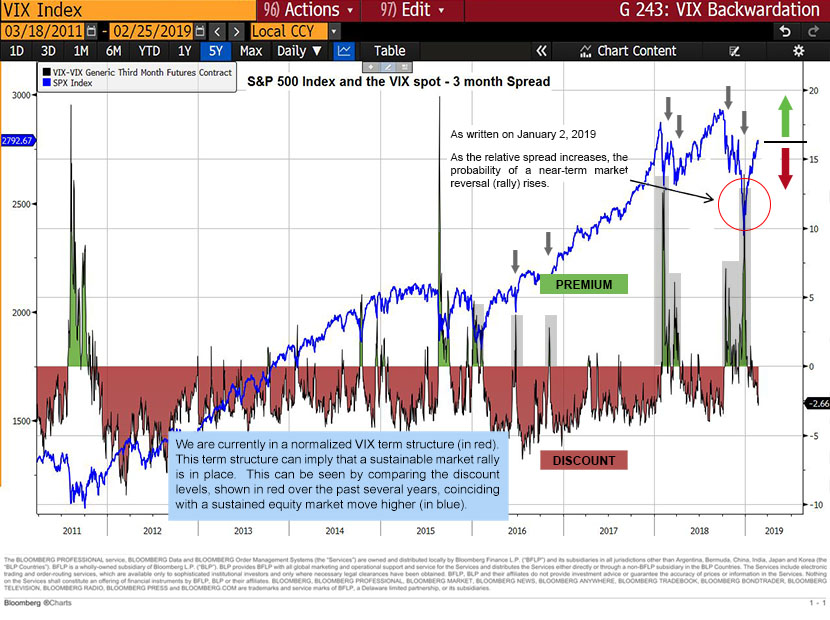 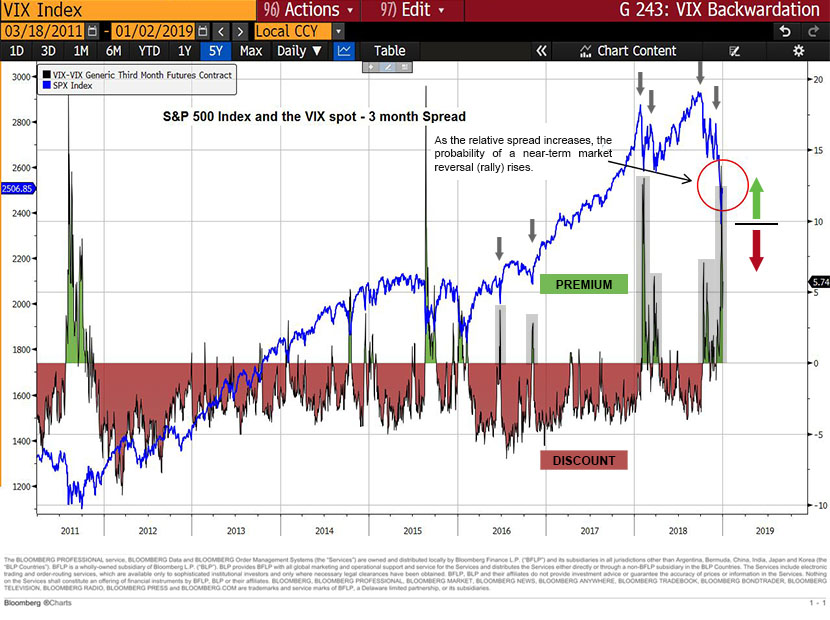 S&P 500 Spread | VIX Spot: The charts above represents an overlay of the S&P 500 Index and the spread of the VIX spot (current) price minus the VIX 3 month futures price (as represented by the green and red shaded areas on the chart). The chart from January 2 showed the VIX term structure known as “contango” (in green) and we mentioned that this represents a near-term reversal (rally) in the equity markets. This is exactly what we got.

The updated February 25 chart currently shows a normalized VIX term structure (in red). This term structure when combined with the other volatility indicators can imply that a sustainable market rally is in place. This can be seen by comparing the discount levels (shown in red) coinciding with a sustained equity market move higher (in blue). We will be watching this closely since any extreme spikes lower can imply a market reversal. 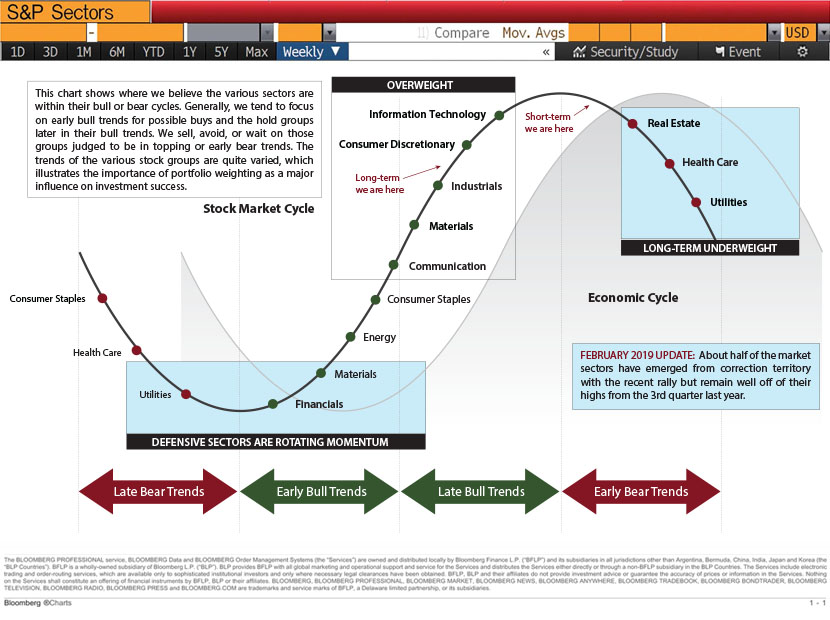 Sector Weightings: As shown in the prior update, the chart above highlights our basic framework of over-weighted and under-weighted sector allocations. This overall viewpoint has not changed even after considering the recent equity rally.

Attractive Sectors during a Bull Cycle: Based on historical data with a low and or slightly rising yield curve in place, the best sectors in later stage bull cycles are growth related sectors that are rewarded by continued economic expansion. Technology, Consumer Discretionary, Materials and Industrials (if China Trade issues get resolved) should be considered and over-weighted in the portfolio. Non-growth related (defensive sectors) such as Health Care, Utilities and Consumer Staples should be under-weighted in the portfolio.

Summary: Going forward, some qualitative factors to keep an eye on revolves around settling the China trade spat with some type of finality. It doesn’t even need to be a great deal, any deal that would provide companies a strong level of political and economic certainty would be fine. As evidence, the recent update to the North American Free Trade Act will have minimal economic impact but did lead to a market rally due to the added certainty for equity markets. But just as we seem to be approaching a resolution to the China discussions, the administration has ramped up rhetoric of trade tariffs on Eurozone. The markets are just looking for a break in trade talks at this point! The significance of bilateral trade deficits have never been (and shouldn’t be) a focus at this point in the economic cycle. There is broad agreement in Congress that the next step should be an infrastructure bill but is won’t happen with the continued myopia on trade. Hopefully this is settled soon.

Some technical and quantitative considerations are straightforward. The market often moves further than many would expect. The market is continuing with its volatile nature, and while we would normally expect to see some testing of the recent pullbacks, the market is also famous for moving in new and unusual ways, so anything can happen, and we think investors should also be prepared to see more volatility in the months ahead. Despite the equity correction at the end of 2018 and rally in 2019, the indexes continue to be within the same ranges they have been in for some time. The volatility may be elevated now but the overall trend higher remains the same.