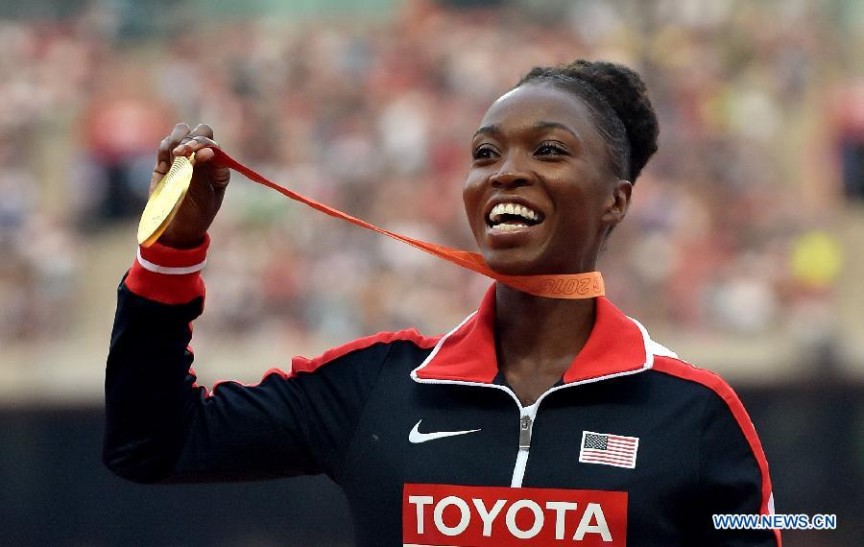 BEIJING – With a World Championship gold medal around her neck, Tianna Bartoletta recollects her feeling waking up the morning of the long jump final.

She knew it would be competitive.

“This morning when I woke up, I had an idea that many people were going to jump seven meters because it’s the World Championships, and I expected everybody to step up.” Bartoletta told the media at National Stadium.

“It’s what I wanted, it’s what we worked for, my team, it’s what we dreamed about all year. This was a major goal and to put it together especially on that last jump. I couldn’t be more proud,” she said.

Bartoletta put on a show for viewers on the final jump when she sprinted down the runway, hit the board with perfect precision and landed in a winning mark of 7.14m, a full 0.07m ahead of runner-up Shara Proctor. The mark shattered her personal best and catapults her to the top of the 2015 world rankings.

10 years earlier, Bartoletta won her first world title in 2005 in Helsinki with another big effort to take the win in a then-personal best of 6.89m. She was just 19-years-old.

At the time, Bartoletta was attending the University of Tennessee where she won two NCAA titles, but decided to turn pro after the World Championships.

The transition was a tough one, filled with injury and heartbreak. In the years after winning a world title, Bartoletta finished 10th overall at the 2007 World Championships in Osaka, and failed to make the Olympic team in 2008.

Slowly Bartoletta began to rebuild and in 2012, she qualified for her first ever Olympic Games. London proved to be incredibly successful for the talented jumper as she finished fourth in the 100m in a personal best of 10.85. She was also a key member of the world record-setting 4x100m relay team that won gold in 40.82.

When asked what happened between now and 2005, Bartoletta answered the question honestly.

“I wasn’t doing much of anything, I was trying to, but things were so bad. I was so down and depressed and just not around very good people that my performances were just a reflection of how I felt,” she said.

With the days of hardship behind her, Bartoletta looks ahead to continuous growth in her career, which includes attempting to compete in both the 100m and long jump moving forward into the 2016 Olympic year. She wanted to compete in both events this year in Beijing, but finished fifth in the 100m at the USATF Outdoor Championships.

Bartoletta’s mark prediction heading into the final Friday night proved to be right. But more importantly, she was ready to meet the challenge.

“I decided to just go for it, and put all my heart and everything that I had into it and just jump, which I know I’m good at,” Bartoletta said with a smile.