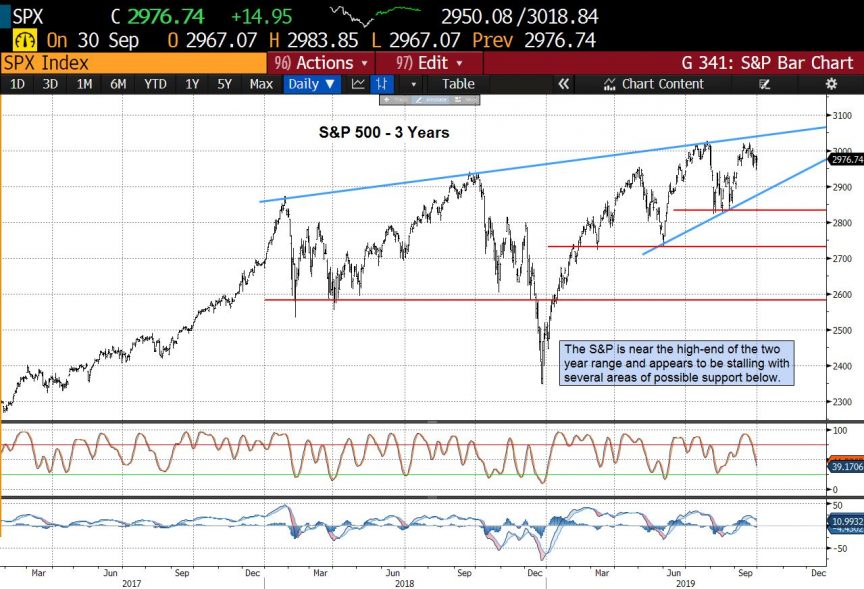 The market indexes appear to us to be forming some short-term peaks that could lead to a pullback of an undetermined amount next month. This time of the year is a traditional period for the market to pull back, but the depth of any correction is always unknown until it pans out.

Beneath the surface, there are some changes that are continuing to take place that suggest to us the indexes may be peaking with the number of advancing stocks decreasing over the past few weeks along with the previously strong large-cap Tech stocks generally easing back while the defensive issues represented by the Utilities and Consumer Staples stocks have been firmer.

We see support levels from 5% to 15% below the current level, so within that range is possible, but that size of a pullback would still be part of the two-year range the indexes have been in and also still be a normal part of the 10-year bull market that remains intact. Therefore, an investment opportunity may be approaching, rather than a time to become overly defensive. 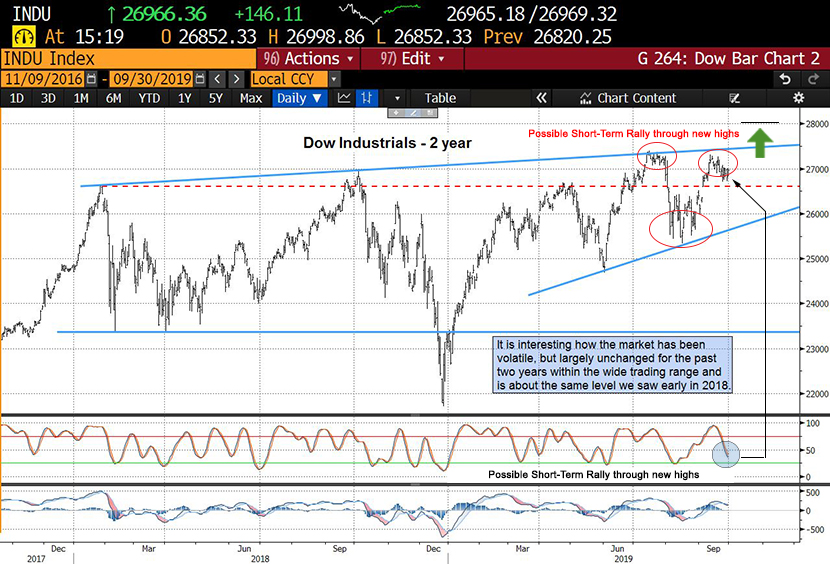 We think it is interesting how many different things there are to worry about in the world at this time and along with no shortage of opinions about what to do about them. But in reality, no one knows what will happen tomorrow or any other day in the future, but we can recognize a trend that is now in place and perhaps expect it to continue until it changes. The market indexes have been in some wide overall ranges of about 15%–20% for the past two years and are again near the high end of those ranges. A clear breakout to new highs by at least 1% or 2% would be a technically bullish signal. 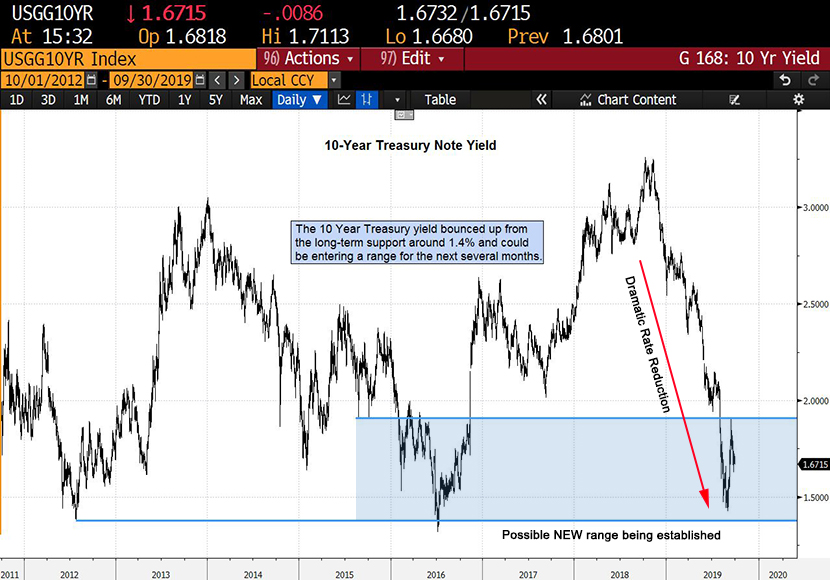 The market for interest rates appears to be settling down after the large drop in rates over the previous year and the bounce back up over the past few weeks. It may be that the yield on the 10-year Treasury note could be finding a range of about 1.4%–2.0% for the next several months, although even that amount is a large window, and it may end up being a tighter range than that. At any rate, it is normal for a security to find a much less volatile range after making an unusually large move, and we suspect that yields could enter a “lower for longer” period in a range that could carry through year-end and beyond. 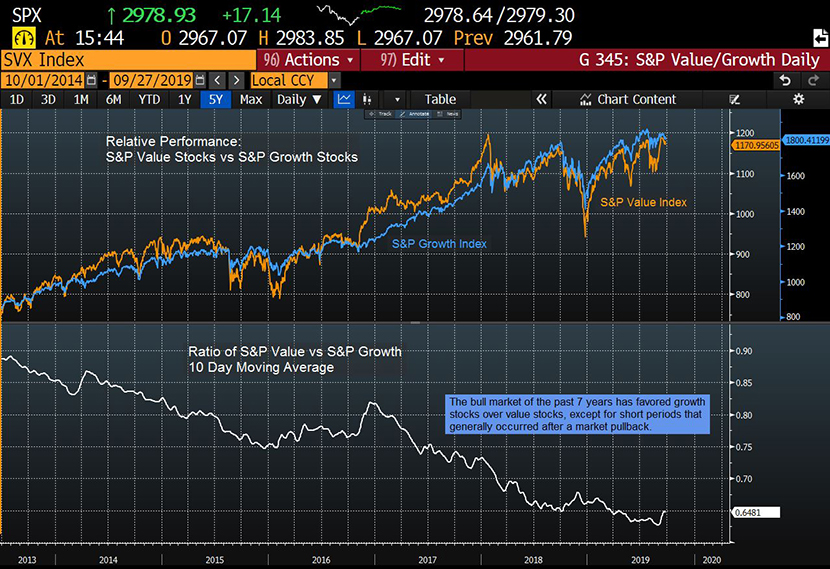 Growth and value. There has been much discussion of whether value stocks, basically those with lower price-to-earnings ratios and earnings growth patterns, are starting to outperform the higher-growth stocks that have been the market leaders during the bull market of the past 10 years. Generally, when there is a greater sense of risk among investors, value stocks often attract more investment interest because of the perceived safety of these usually less volatile issues. However, even in the current news cycle of concern, on many fronts we are still not seeing clear evidence of a significant shift into value stocks as an ongoing trend. Value stocks have moved higher during the bull market, but except for short periods, growth stocks have continued to be the leading sector. 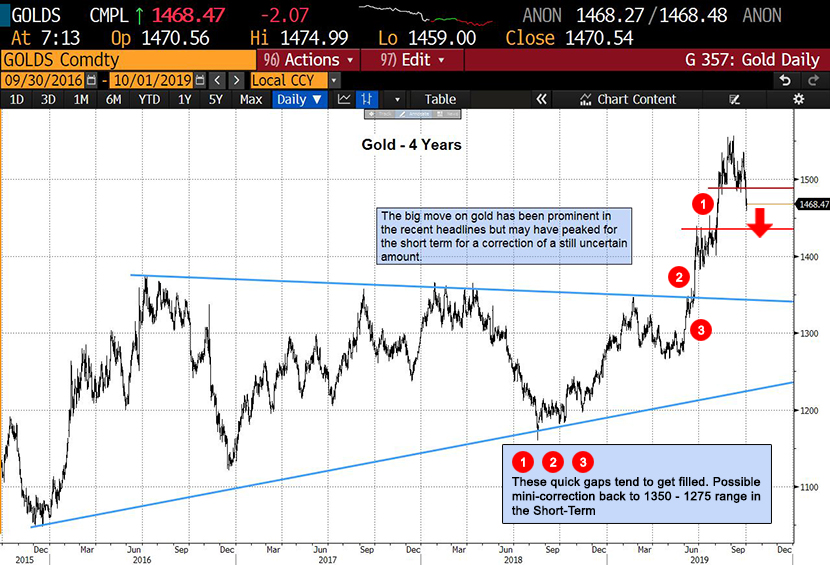 Gold has made a strong run-up in price, gaining nearly 35% in the past 12 months. The uptrend became unusually steep this summer and now appears to have topped out for the short term. The recent uptrend came after gold broke out from a five year bottoming range, and now the previous resistance level around 1350 is the support area that could be tested on a short-term correction. Technically, it is quite normal for a security to test a previous breakout level before resuming an uptrend, and now that gold has moved below 1500 that possibility has increased for the near term. We think the overall trend on gold remains bullish for the longer term, but the near-term picture is that of a correction. 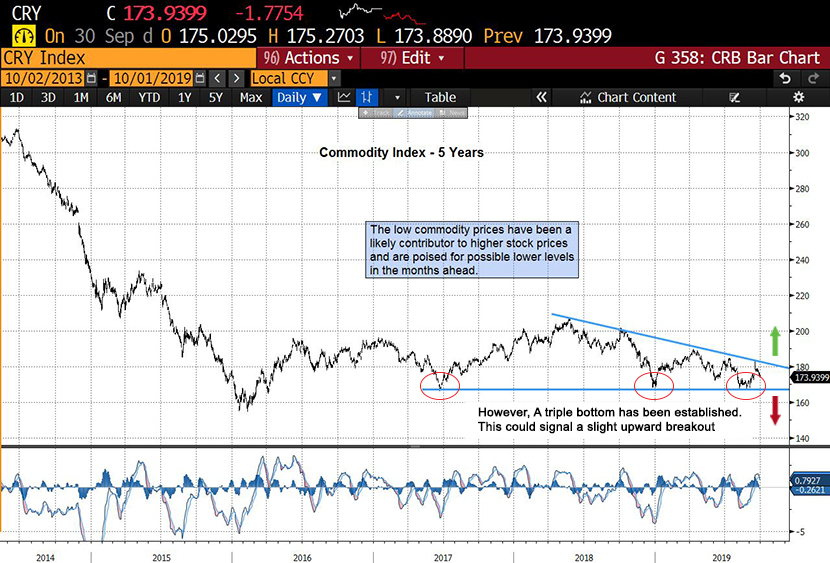 One of the concerns that economists have is that economic growth remains low, as low inflation and low interest rates have been both possible indications and partial causes of a slower-growth period. Commodity prices have been low for the past four years and are still trending lower, and could be one of the better indicators of economic growth, or lack thereof, for the economy. On the other hand, this period of slower growth has also prevented the economy from overheating and has been a net positive for the stock market. The more recent trend of commodity prices shows further weakness with a possible break to new lows signaling even lower inflation ahead.

SHORT TERM (days to weeks) – Neutral. The major indexes have moved into some relatively tight ranges of about 4% for the past month despite the many trading days where the indexes have moved in excess of 1%. This type of a neutral trend is normal and constructive as long as the support at the lower end of the ranges hold, which are at levels of 25,400 on the Dow Industrials and 2820 for the S&P 500. The current technical measures suggest a slightly higher risk of breaking to the downside, rather than higher, but we think the relatively high amount of bearish sentiment is an indication that any market weakness from here could be limited. These ranges could last another month or two before the long-term bullish trend begins again, with the higher daily volatility remaining an ongoing pattern.

INTERMEDIATE TERM (weeks to months) – Neutral. The indexes are also in trading ranges for the intermediate term, and these ranges have been nearly 20% wide for the DJIA and the S&P over the past two years. This is also normal for a bull market that has more than quadrupled from the low of 10 years ago, but the wide range also allows for much movement in both directions over the shorter term as the market reacts to the news and events that may or may not carry significance to the stock market. This larger range could continue until earnings estimates for the broad market start to show some improvement from their currently flattish expectations

LONG TERM (months to years) – Bullish. The bull market of the past 10 years remains intact although the short-term, more volatile movement can be a distraction from the general improvement of the economy and business conditions over the past several years. Long-term secular bull markets tend to move higher until stock valuation measures along with consumer and investor sentiment reach higher levels of bullishness. As these long-term bull markets develop, there is generally much volatility along the way with market pullbacks and economic slowdowns being possible within the longer-term trend. These intermediate disruptions to the long-term trend are common and to be expected, while the more serious declines of the past tend to occur after much-longer periods of bullish enthusiasm have carried the markets to much higher levels. Eventually, we believe that the current secular bull market will get to a much more optimistic place, but has years to go before we see it.

TRADING UPDATE: The markets are currently lacking definitive leadership with Healthcare leading for a week; Financials another week; and Tech for yet another. This can be due to election news, interest rates movements or concerns over earnings sustainability. For this reason, we remain committed to a diversified portfolio and we will make adjustments as market conditions change.